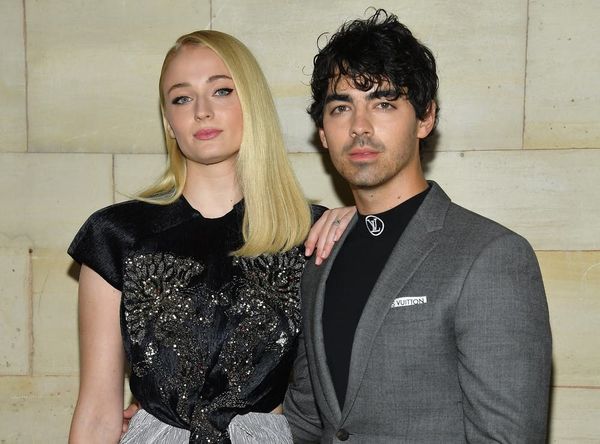 Sophie Turner and Joe Jonas aren’t shy about showing affection for each other, but until this week, they had yet to walk the red carpet as a couple. They made their debut at the Louis Vuitton show at Paris Fashion Week on Tuesday, October 2.

The 22-year-old Game of Thrones actress and 29-year-old DNCE singer looked perfectly at ease — and utterly gorgeous, of course — as they posed for the press at the industry event. Turner stunned in a silver skirt, thigh-high black boots, and a shimmery black shirt tied at the waist, while Jonas wore a gray suit with a black shirt.

The X-Men: Dark Phoenix star took to Instagram on Wednesday to share a photo of herself and Jonas inside the event. In the pic, the stars sit at a table with a tray of desserts in front of them — though they’re clearly more interested in each other than in the food. “With my love in Paris,” she captioned the sweet snap.

The couple, who’ve been together since 2016, announced their engagement in October 2017, sharing a pic of just their hands, with Turner’s diamond ring on full display. “I said yes,” she captioned the photo at the time.

In the year since, they’ve been spotted double-dating with Jonas’ younger brother Nick Jonas and Priyanka Chopra, and visiting a tattoo shop to get coordinating tattoos.

Speaking about their relationship in an interview with Marie Claire earlier this year, Turner said, “There’s this weird misconception that being married is the greatest thing that’ll ever happen to you. But I’ve always found that my career is something I work for, and when I achieve something, there’s a sense that this is the greatest thing I’ll do in my life. It’s lovely to be engaged. Not like I achieved anything, but I found my person, like I’d find a house that I love and want to stay in forever. There’s a sense of peace that comes with finding your person. But there’s a drive that comes with your career.”

What do you think about Sophie Turner and Joe Jonas’ red carpet debut? Let us know @BritandCo!