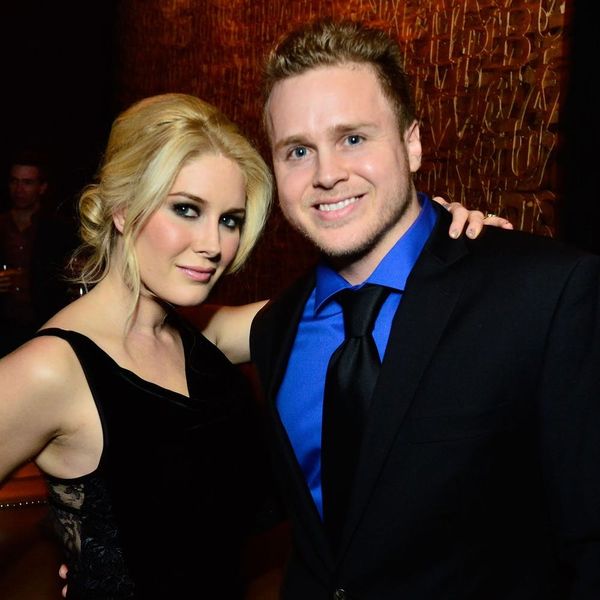 The internet has been buzzing out of control with the (still unconfirmed) rumors that Kylie Jenner and Khloé Kardashian are both pregnant, and that’s on top of reports that Kim Kardashian West is expecting her third child via surrogate. In light of all the gossip, Spencer Pratt had a couple of very stern warnings for his unborn son.

The father-to-be first took to Instagram three days ago for some “deep talks with Jr.” Speaking directly to wife Heidi Montag’s baby bump, he told their little one, “Son, whatever you do, stay in that belly. Kylie Jenner just announced her pregnancy. You cannot come out until that press chills out. Okay, son? Listen to your dad. Love you!”

Spencer Pratt had a stern talking-to with his unborn child: "Son, whatever you do stay in that belly. Kylie Jenner just announced her pregnancy. You can not come out until that press dies down." The baby seems pretty obedient so far. 👶🏼

But the proud dad-to-be wasn’t done there. Pratt had a second message for his baby boy after the rumors about Khloé came out.

Taking to Instagram once again, the 34-year-old shared a similar warning, saying, “Listen up, son, I know you can hear me. Khloé Kardashian is now pregnant. That means you really cannot come out early. At least one more week. She’s gonna have all the tabloid coverage next week, son. Don’t blow this, okay? I’m depending on you.”

First Kylie, now Khloé? Spencer Pratt is forced to have another serious talk with his unborn son: "Khloe Kardashian is now pregnant. That means you really cannot come out early. Wait at least a week. She's gonna have all the tabloid coverage...Don't blow this." 👶🏼

That’s a heck of a lot of pressure for a teeny-tiny baby. Let’s hope Jr. can live up to it.

What celebrity baby news are you most excited about at the moment? Let us know @BritandCo!