The Statue of Liberty Climber Speaks Out: ‘I Went as High as I Could’ 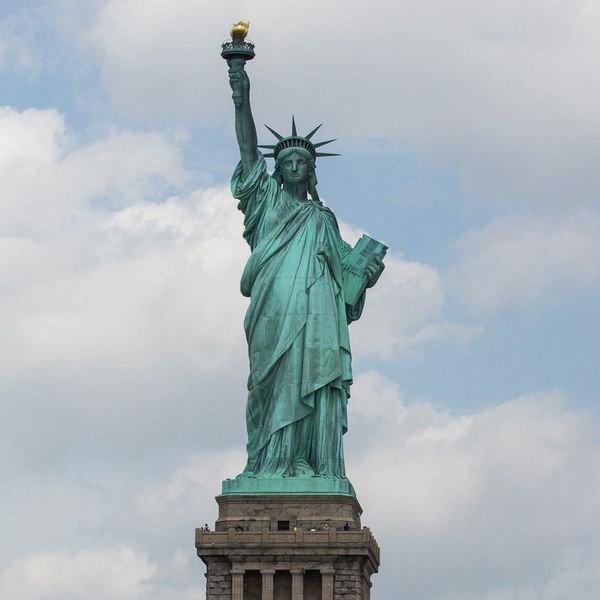 All eyes were on the Statue of Liberty on the Fourth of July this week, but not because of fireworks or some other festive display. The nation was transfixed as 44-year-old Therese Patricia Okoumou, an immigrant rights activist, scaled the base of the famed statue in protest of the Trump administration’s immigration policies. After getting arrested for her protest, Okoumou said that she was inspired by former first lady Michelle Obama.

Speaking to reporters after she was released from jail, Okoumou said, “Michelle Obama — our beloved first lady that I care so much about — said, ‘When they go low, we go high.’ And I went as high as I could,” the New York Post reported.

Just before Okoumou’s now-famous ascent up the base of the Statue of Liberty, the activist group Rise and Resist dropped a banner reading “Abolish ICE.” Okoumou protested with this group, some of whom were also arrested for the banner drop, BuzzFeed reports.

But Okoumou’s protest garnered the most attention. Climbing up to the feet of the Statue of Liberty, Okoumou waved a T-shirt reading, “Trumpcare makes us sick,” and stated she would not come down from her post until ICE frees families who were separated and detained at the US-Mexico border. Her climb not only made national headlines but also prompted an evacuation of Liberty Island.

Okoumou was arrested after a stand-off with police that lasted three hours, according to CNN. Police used harnesses and ropes to remove her from the statue. Following her arrest, Okoumou was temporarily held in jail and has been charged with three misdemeanors including trespassing, the New York Times reports. Okoumou pleaded not guilty to the charges on Thursday, and a federal judge released her on her own recognizance.

Okoumou is an immigrant from the Democratic Republic of the Congo, an activist, and a personal trainer. During the press conference she held with her lawyer on Thursday, she called Trump a “monster” over his family separation policies. “I can say a lot of things about this monster,” Okoumou said, “but I will stop at this: His draconian zero-tolerance policy on immigration has to go. In a democracy, we do not put children in cages. Period.”

Okoumou’s bold Fourth of July protest is one of many ongoing protests against the Trump administration’s immigration policies. All around the country there have been occupations of ICE facilities, massive marches, fundraisers, and more, in support of immigrant rights and against racist immigration policies.