Stop Interrupters in Their Tracks With These Smart Tips 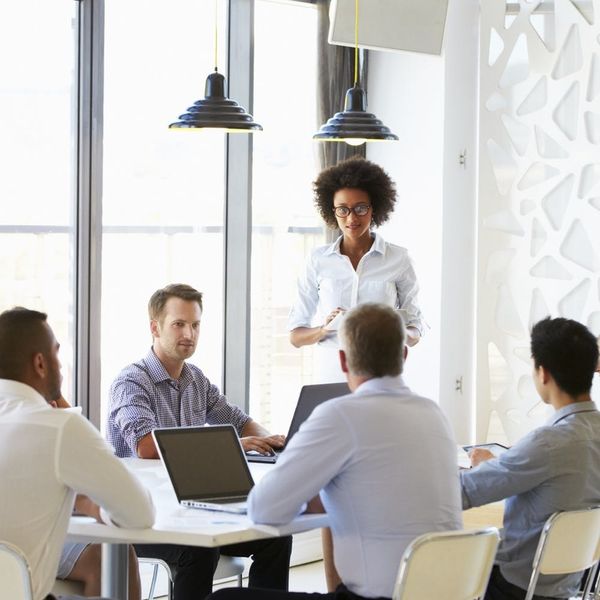 If you watched the presidential debate last week, you probably noticed how much Donald Trump interrupted Hillary Clinton. If you’re a woman working in any type of professional environment, you likely have experienced a similar (although maybe less pointed) form of disruption during a presentation or meeting at work. It’s well-established that women get interrupted more than men, with studies confirming this fact dating back as early as 1975. The researchers actually found that, in the mixed-sex conversations they included in the study, men were responsible for all but one of the interruptions they observed, making their finding that women get interrupted by men wayyy more than the other way around pretty definitive. But why is this, and how can you deal with it in a professional setting? We chatted with Ferne Traeger, an executive coach, psychoanalyst, and the Founder and President of Beyond the Boardroom, to discuss the best methods for combatting this apparent gender bias in the workplace and to dissect the root of the problem.

WHY WOMEN GET INTERRUPTED MORE

Traeger believes that the practice takes root in antiquated gender stereotypes, even amongst young people. “There’s still an idea that women should be seen but not heard; that they should wait their turns and act demurely,” says Traeger. “This extends to women being uncomfortable promoting themselves or tooting their own horns, versus men who have no discomfort in this arena. Unfortunately, this is part of why women are often passed over for promotions at work. Even today, little girls are still socialized to be ‘ladylike,’ which is a euphemism for demure and quiet.” Perhaps it makes sense then, that if a woman is being something other than demure and quiet, she’ll be interrupted.

Women who fight against these interruptions or stick up for themselves in any way are often are seen as “harsh” and “aggressive.” In fact, Sheryl Sandberg’s Women in the Workplace research from 2016 found that “women who negotiate are disproportionately penalized for it,” since people perceive it as too aggressive. This notion of women advocating for themselves being “aggressive” is undoubtedly related to how women deal with being interrupted. Sure, it’s easy to imagine snapping back at whoever it is that’s cutting into your talking time, but will that cause others to perceive you as “too bossy” or “entitled?” Of course, if a man reacted in this way, he would be seen as strong and capable, which yet again reveals an inherent gender bias that occurs in the workplace. Traeger does feel optimistic that millennials, at least, are more aware that these gender biases exist and progress is being made in the way women are treated in the workplace. It’s clear, though, that there’s still work to do.

“It’s difficult to know how to respond to being interrupted, because a woman runs the risk that if she pushes against the stereotype, she reinforces it,” says Trager. In other words, if you react assertively to being interrupted and say that you’re not okay with it, you’re reinforcing the stereotype of being “aggressive,” but if you allow someone to continue interrupting you without speaking up for yourself, you’re being “demure and quiet.” It’s quite the catch-22.

1. Stop and Wait: In these situations, Traeger recommends a strategy similar to HRC’s in the debate: “One strategy is for a woman to become silent once interrupted, and look the interrupter in the eye until they stop talking. This is a good tactic because it doesn’t reinforce any stereotype.” Being silent is the opposite of being aggressive, while making eye contact lets your interrupter know that you’re aware of what they’re doing.

2. Take It Offline: Another strategy is to simply take the offender aside privately and let them know that their interruptions are not okay. This tactic works better with someone who is your peer, since “one treads more gingerly with one’s boss, and has to weigh the ramifications of pushing back versus conforming to the status quo more heavily,” notes Traeger. If you think your interrupter might not be aware of what they’re doing or that it’s disrespectful, this is the best strategy to take.

3. Fixing the Bigger Problem: Most importantly, says Traeger, “I believe we want to attack the bias not the behavior.” Getting your coworker to stop interrupting you at work won’t suddenly make people treat women equally in the professional world, but taking measures toward making women equal in the workplace will get them to stop interrupting you — for good. “Research shows that work teams that are more diverse perform better; women are more competent when it comes to leadership skills, although men are more confident,” she says. The onus falls on employers to make sure they’re doing their part. Some ideas Trager suggests are to “encourage women to speak up and be heard, call on them, have a no interruption rule and increase the number of women in leadership roles. These are all bias interrupters.”

So for now, if you want to deal with an interrupting problem in the moment, give one of Traeger’s strategies a try, but when you’re eventually in charge (and you know you will be), know that changing how women are thought of in the workplace is priority number one. When women are paid equally, treated equally and perceived equally, solutions to the unique problems women face in the workplace will follow.

Do you get interrupted at work? Tell us how you deal with it @BritandCo!

Julia Malacoff
Julia is a writer, editor and proud life-long vegetarian based in Brooklyn, NY. An avid traveler, meditation enthusiast and exercise junkie, she stays active in every new locale she visits.
Work
More From Work