These 12 Street Artists Are Going to Blow Your Mind 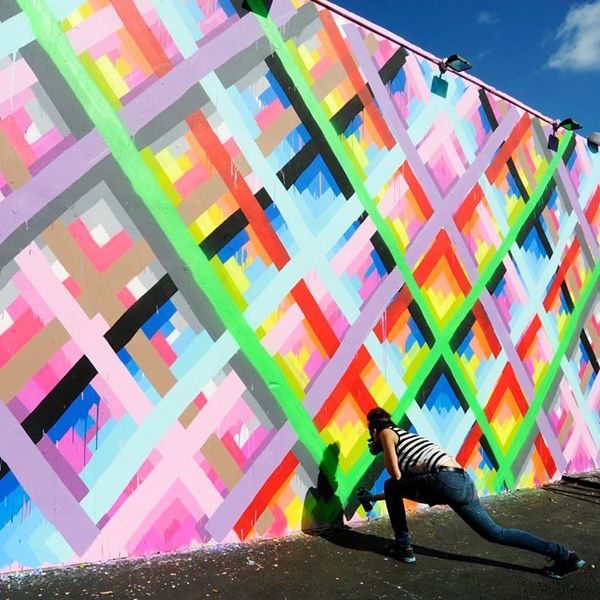 Street artists are steadily making their way into major art institutions, conquering the transition from street to gallery. But they will always be drawn to those forgotten spaces outside the four walls of a museum. Unleashed self-expression awaits you in virtually every city if you look in the right places. We know it can be hard to keep up with all the amazing makers out there, so we’re sharing our favorite artists to keep on your radar.

1. Maya Hayuk: We dare you not to be affected by the pop and playfulness of a Hayuk mural. This Brooklyn-based female artist is streaking walls with her infectious cotton candy colors. (Photo via Maya Hayuk)

2. Nychos: Don’t get squeamish: Nychos’ trademark cartoonish anatomy dissections are a thing of wonder and awe. The murals continually grow larger in scale, which gives him plenty of space to play doctor. (Photo via Nychos)

4. Kid Hazo: With Kid Hazo, everything is not always as it seems. This Philly-based street artist has duped plenty by installing replicas of official street signs around town. A closer look reveals a far more playful message. (Photo via Kid Hazo)

5. Invader: Pixilated space invaders popping up around town signal the arrival of Invader, the artist from… well, we don’t really know. But he does get around; the tiled mosaics have shown up everywhere from below sea level in the Cancun Bay in Mexico to the International Space Station. (Photo via Invader)

6. My Dog Sighs: There was a time when London was the only place to see the haunting eyes banded with a single streak of color. MDS is cropping up all over the states now, leaving cityscapes painted in the irises of those deep orbs. (Photo via Tori Howard)

7. X-O: Everything you see here is made of found, recycled objects gathered by X-O while roaming the streets. He transforms them into striking, geometric assemblages of color, shape and composition, which he refers to as “Lost Object Installs.” (Photo from Jaime Rojo)

8. A Common Name: The artist otherwise known as Paige Smith might have a common name, but there’s nothing ordinary about her street art project, “Urban Geodes.” She installs shiny clusters of resin shapes that resemble natural geode formations into forgotten spaces. (Photo via Paige Smith)

10. Pixel Pancho: Pixel’s warm, earth-tone murals read like a study of robot portraitures from the past. (Photo via Pixel Pancho)

12. NoseGo: This Willy Wonka of murals is pure unadulterated childhood imagination unleashed in a hurricane of color. (Photo via NoseGo)

Which street artists are you following? Come on, school us: Share your favorites in the comment section below.

Ginger Rudolph
Ginger is a pop culture enthusiast and avid art appreciator. She spends entirely too much time watching Sci-Fi and listening to podcasts. She currently lives in Philadelphia, PA, where she writes and wanders the streets from coffeehouse to coffeehouse.
Art
Home News
Art Makers street art