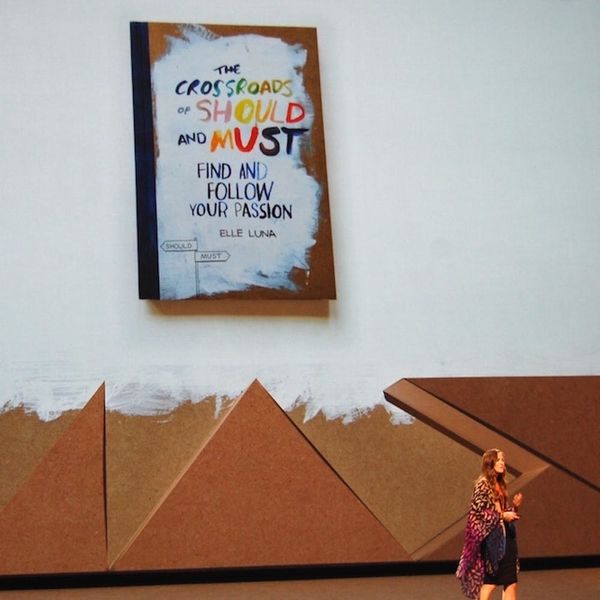 Inspiration can strike at any time. Whether you’re walking down the street in your neighborhood, scrolling through your fave fashion designers on Instagram or reading up on how successful #girlbosses made their passion project into their full-time career, a sudden flash of a bright idea emerges. You jot it down and file it away, but filmmaker Baz Luhrmann, artist Elle Luna and Humans of New York creator Brandon Stanton have some better advice on just what to do with that spark of creativity.

They want you to act on that impulse. As Baz told a captive audience at Adobe Max 2015’s Creativity Conference, “Don’t wait for permission to go out and create.” During the Adobe keynote speech, these artists implored the audience to follow their creative passions, just as they have done. Storytelling is the “only currency I know,” Baz told his fans. Ever since he was a child, Baz loved the world of storytelling. For the film Romeo + Juliet, Baz collected images from magazines and drew “terrible sketches” of what he envisioned the film looking like. He collected these bits of inspiration into collages that he turned into elaborate handmade books. This creative process helped him develop the movie into the piece he wanted. Baz shared, “If you’re compelled to get something out, listen to yourself.”

Elle Luna, a painter and artist, echoed Baz’s sentiments when she spoke about her essay that went viral, “The Crossroads of Should and Must,” which later became a book with the same title. She passionately spoke about choosing your must. “Culture says we ‘should’ do something, but when we choose should, we don’t want it. Must is about your deepest longings. Choosing must is the greatest thing we can do in our lives.” Before Elle took the leap into painting full-time, she worked at a San Francisco startup designing and building mobile apps. But a recurring dream of a white room led her to rent a white walled studio space to get back to her dreams of painting. She looked at her finances, put in her two weeks notice and quit her day job.

In her empowering talk, Elle addressed very real questions she’s gotten since her essay went viral, like how to find your must. “Call your mom or someone who knew you when you were little. Who were you as a child? What did you love to do?” For those who struggle with giving up the financial safety net of a biweekly paycheck, Elle says, “There is dignity in all work. Just because you do something for pay doesn’t mean it’s dirty work.” Her last bit of advice if you’re hard-pressed to find the time for your must: “We are addicted to being busy. Find 10 minutes. Sit on a park bench and give yourself the space for your must.”

Brandon Stanton is best known as the creator of the super popular blog Humans of New York, but a mere five years ago, he was a full-time bond trader in Chicago who was terrified of losing his job. When his day job started going downhill, he did what Elle did: He gave himself the mental space to do something entirely different than his day-to-day gig worrying about markets. He bought a camera and started walking downtown in Chicago and taking thousands of photographs. He says, “I remember feeling such a sense of accomplishment when I looked in the viewfinder.”

Like Baz, Brandon suggested that creatives go out there and get to work on what they are passionate about. “If I had waited until I had the idea of Humans of New York, I wouldn’t have ever had this.” When he moved to New York City with two suitcases and his camera, he had no idea that his photo project — walking the streets of the city and documenting daily life — would turn into an inspirational blog, a New York Times best-selling book and eventually meeting the President of the United States. At first, Brandon didn’t even approach people. He simply photographed interesting people from afar because he was too afraid to talk to anyone (really!). But his pivotal moment came when he took a photo of a woman dressed all in green. She told him, “Every day I was a different color, then I was green. I’ve been green for 15 years now.” Brandon added that simple caption to his image, and the photo got the most likes and engagement of any of his work.

“I knew I could do something different if I could get over that fear and talk to people. Why not find out a little bit about who these people are?” So he started with short five-minute interviews that have now evolved into 30- to 45-minute discussions. Brandon asks very specific questions like: What’s your saddest moment? What do you feel guilty about? What’s your happiest moment? What’s the moment you felt most afraid? He shared, “The questions I ask have to do with the most emotion. If you listen to everyday people with the same curiosity that we do for celebrities, you can portray their story and captivate people.”

The HONY community has grown leaps and bounds since Brandon first started documenting the residents of the Big Apple. He’s taken his project to other countries such as Pakistan, India, Uganda and Syria. But he reminded those listening to his talk that it all started because he dared to pick up a camera and follow his passion. “Five years ago I picked up a camera. All of this happened because I was able to get over that fear of doing something new. Trusting that I could do it and figure it out. Everyone thought I was crazy, but I did this thing that I was scared to do and I figured out how to do what I love,” said Brandon.

What’s your must? Share in the comments the passion project that you are now inspired to do!