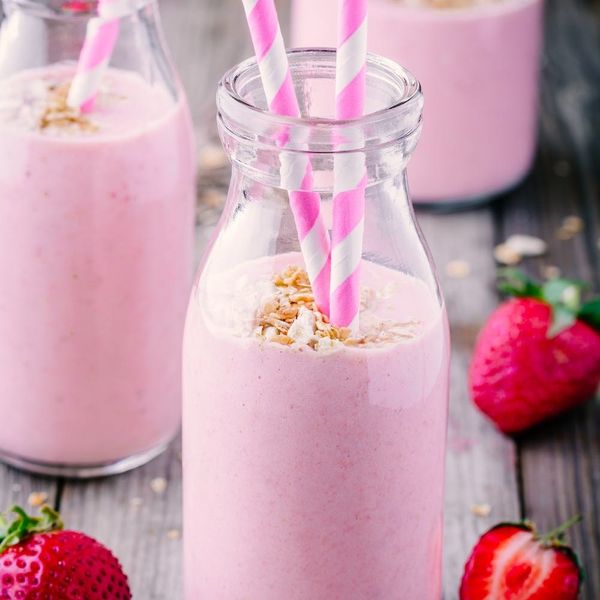 One of the biggest trends in nutrition right now is clean eating — basically, it’s the idea that consuming whole, unprocessed foods prepared as naturally as possible is the key to a successful diet. Within five minutes of browsing the web, you can pretty much find all the information you need to know about how to incorporate clean eating into your lifestyle, but we were surprised to learn how little info was available about how to incorporate healthy drinking habits into our lives. I mean, we love a glass of ice water as much as the next person, but surely we’re not expected to drink nothing but water with every meal… right? As we begin preparing ourselves for an ambitious clean eating challenge this February by ridding our kitchens of added sugars and processed foods, we’ve decided to give our favorite beverages an overhaul too. Here are 11 sugar-loaded drinks that we’re purging from our fridges to cut back on our sugar intake and quit drinking our calories for good.

1. Sweetened Yogurt Drinks:According to Toronto-based registered dietitian Abbey Sharp, sweetened yogurt drinks aren’t actually as healthy as you may think. The actual yogurt in the beverage is good for you, but yogurt drinks often pack upwards of 25 grams of sugar into a small bottle. While most yogurt drinks are marketed toward kids, even an adult-friendly drink like the Chobani Low-Fat Greek Yogurt Drink is 200 calories and contains 22 grams of sugar. “You’re much better off eating plain yogurt and adding your favorite berries and fruits to taste,” Sharp advice.

2. Bottled Fruit Smoothies: If you don’t have time to mix up a homemade smoothie packed with fresh fruits and veggies, you should probably avoid swapping it out for one that you’d find prepackaged at your local grocery store. “Fruit smoothies that you buy at the store are often made with sweetened frozen yogurt, so they’re closer to a milkshake than a healthy breakfast or snack,” explains Sharp. Even smoothies that advertise being all-natural and health-conscious aren’t exempt: The Naked Berry Blast Juice Smoothie contains 250 calories and a whopping 49 grams of sugar.

3. Energy Drinks: Okay, this one’s probably pretty obvious, but energy drinks are a big no-no if you’re trying to avoid drinking excess sugar. There are 39 grams of sugar in every can of regular Red Bull, and most energy drinks contain a large amount of caffeine and other chemicals that can increase your heart rate and cause numerous heart-related health risks. If you’re looking for a healthy alternative to keep you alert and focused, try eating an orange — the vitamin C will enhance your attentiveness and give you the boost you need to carry on with the rest of your day.

4. Sugary Coffee Drinks: There are so many science-backed benefits of drinking coffee — in fact, some studies even suggest that drinking coffee can help you live longer. But while drinking a cup of black coffee in the morning is A-okay, drowning that mug in sugar, milk, and syrup is an easy way to turn the common pick-me-up into a saccharine dessert. This is definitely the case for prepackaged coffee drinks; for instance, you’ll find 31 grams of sugar in one bottle of Starbucks Frappuccino Chilled Mocha… AKA, a midday sugar crash practically guaranteed.

5. Sports Drinks: When it comes to sports drinks like Gatorade, a single bottle will typically net you 34 grams of sugar — in fact, sugar and dextrose (also a form of sugar) are the highest ingredients on the list after water. Sure, some athletes need the extra calories to make up for a tough workout, but if you just need a quick refresher to get you through the workday, it’s best to avoid these syrupy sports drinks altogether.

6. Sweetened or Flavored Coconut Water: Indulging in a bottle of coconut water is a great way to stay hydrated because it’s packed with electrolytes that help keep the body’s fluid levels balanced throughout the day, especially when you’re working out. While natural organic coconut water is definitely a good choice, sweetened or flavored coconut water is often packed with unnecessary artificial sugars. Make sure you do your research and read the label before you pick one up: Popular choice Zico Watermelon Raspberry Flavored Coconut Water still has 13 grams of sugar per serving.

7. Iced Tea: You’ve probably heard the myth that iced tea is better for you than soda, but we’re here to tell you that (at least when it comes to the sweetened varieties) that’s entirely untrue. Most cans and bottles of iced tea are packed with syrupy sugars that make them just as bad as, if not worse than, the average soda. For instance, a bottle of the popular Lipton Brisk Ice Tea contains 28 grams of sugar — equivalent to more than two tablespoons of table sugar.

8. Vitamin Water: When you’re standing at the grocery store checkout trying to decide between a Pepsi and a Vitamin Water, the decision seems obvious… but is it? “Even if they don’t have added sugar, they have to be flavored somehow,” registered dietitian Ilyse Schapiro tells Health.com. “This means they may contain artificial sweeteners or Stevia. And just because it uses a more natural, calorie-free sweetener doesn’t make it healthy.” Classic Vitamin Waters like Energy contain a whopping 32 grams of sugar. According to The Nutrition Source, drinks that contain more than a gram of sugar per ounce of beverage should only be consumed sparingly and infrequently, so it’s better to view these tasty drinks as a treat than a healthy alternative.

9. Beer: Whether you’re having a night out with your girlfriends or treating yourself after an intense workday, sometimes it’s tough to resist the temptation to crack open a chilled beer. If you do decide to partake in a brewski, be aware that beer is extremely high in calories and carbs, especially if your beer of choice has a higher alcohol content (for example, a single bottle of Heineken has over 160 calories). If you do want to indulge, check this handy list of which popular beer brands have the highest and lowest calories. If you’re trying to keep your calories and carbs to a minimum, opt for light beers instead, or limit yourself to one delicious stout.

10. Soda: It doesn’t take a research genius to realize that America has a problem with sugary drinks, especially soda. Sugary drinks make up almost half of all added sugar in the average American’s diet. On any given day, half of the people in the US consume sugary drinks, a quarter consume at least 200 calories from these drinks, and five percent drink at least 567 calories (equivalent to four cans of soda), according to Harvard’s T. H. Chan School of Public Health. The average can of sugar-sweetened soda contains roughly 150 calories, and almost all of them come from sugar, usually high-fructose corn syrup. To put that in perspective, if you were to drink just one can of soda per day without cutting back on calories elsewhere, research suggests you could gain up to five pounds in a single year.

11. Fruit Juice: Most people think that drinking a glass of fruit juice is clearly a smarter option than devouring a can of soda, but that’s actually not always the case. Again per the T. H. Chan School of Public Health, even though fruit juice contains more nutrients, it contains as much sugar and calories as regular soft drinks (though the sugar often comes from naturally occurring fruit sugars rather than added sugar). A single eight-ounce glass of Mott’s Apple Juice contains 28 grams of sugar, making it a beverage that should be only be consumed in moderation.

Which sugary drink are you going to resign to a sometimes treat? Tweet us by mentioning @BritandCo.

Ashley Macey
Ashley Macey is a lifestyle freelance writer who loves all things fitness, wellness, and creativity. When she's not exploring her home in the Pacific Northwest with her dog Max, you'll probably find her curled up with a good book and some hot tea. Follow her daily jaunts on Twitter.
Diet
Health
Diet Drink Healthy Living