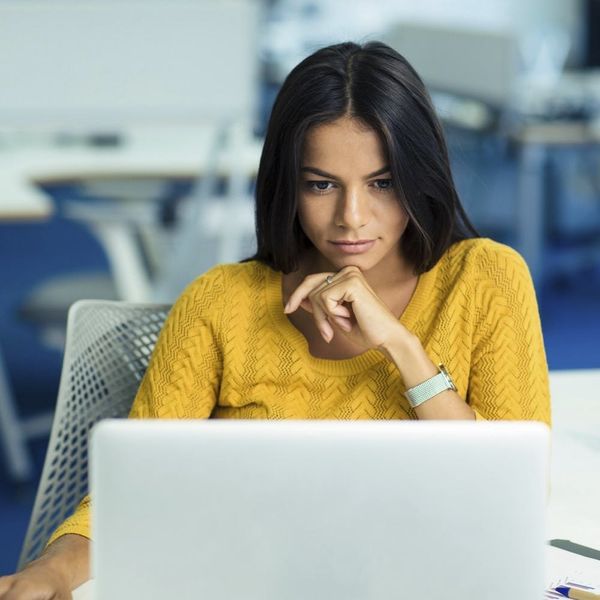 Doing your own taxes is a crazy important and mega stressful part of growing up, but you’re not alone if you’ve left it to the last minute. According to a new study by LifeLock, nearly a quarter of Americans admit that they tend to wait until the last minute to file their taxes. Additionally, roughly one in six Americans would rather get a root canal than file their annual taxes (yikes!). But while most people assume that they’ll be fine as long as they turn in their forms before April 18, this isn’t always the case. In fact, there’s actually a really scary reason you should turn in your tax forms ASAP… and it has to do with identity fraud.

Although most people probably associate identity theft with stolen credit cards and elaborate catfish scams, Americans can actually fall victim to tax-related identity fraud too. “Submitting fraudulent tax returns in your name and claiming the refund is a relatively easy thing for criminals to do, so the earlier you file, the less likely someone else may beat you to the punch,” says LifeLock’s Security Communications Director Joe Gervais. All a thief needs to submit a fraudulent return is your name, SSN number, and date of birth — basically, all the information that is often stolen from data breaches and email phishing scams.

While tax-related ID fraud is fairly common in the US, many Americans are completely oblivious to the fact that it could happen to them. In fact, more than 25 percent of people who participated in the LifeLock survey said that they had never heard of tax-related identity theft prior to being interviewed.

But before you start getting overly paranoid, there are a few things you can do to help secure your personal information online and avoid tax-related identity theft, such as watching out for phishing emails, monitoring your credit cards for unauthorized charges, and only filing your taxes through a secure internet connect (AKA no public WiFi hotspots). We chatted with identity theft expert Joe Gervais to learn more about this type of fraud and how we can better protect ourselves in the future.

B+C: Why do you think no one is really aware of tax-related identity fraud?

Joe Gervais: Tax-related identity fraud is quite common; however, taxpayers may not be aware of this type of fraud because it’s nearly impossible to tell if they’re a victim until they receive a letter from the IRS rejecting their tax return. In fact, during the first nine months of 2016, the IRS flagged roughly 787,000 fake tax returns, which claimed $4 billion in refunds. About 238,000 taxpayers also filed affidavits saying they were victims of tax identity theft.

B+C: How is it different (if it is) from other forms of ID fraud?

B+C: What can people do if they fall victim to tax-related ID fraud?

JG: If someone believes that they are a victim of tax fraud, there are steps they can take to protect themselves. First, they can call and notify the IRS that they may be a victim of tax fraud this season. If they’ve received notification from the IRS claiming they already filed a tax return, report the incident immediately. Also, file a fraud report with the FTC and all three credit bureaus. Finally, check their credit score and other account activity to determine if they may be a victim of identity theft and, if so, freeze their accounts.

Have you started filing your taxes yet? Tweet us your top procrastination-busting tips by mentioning @BritandCo.

Ashley Macey
Ashley Macey is a lifestyle freelance writer who loves all things fitness, wellness, and creativity. When she's not exploring her home in the Pacific Northwest with her dog Max, you'll probably find her curled up with a good book and some hot tea. Follow her daily jaunts on Twitter.
Adulting
Work
Adulting money