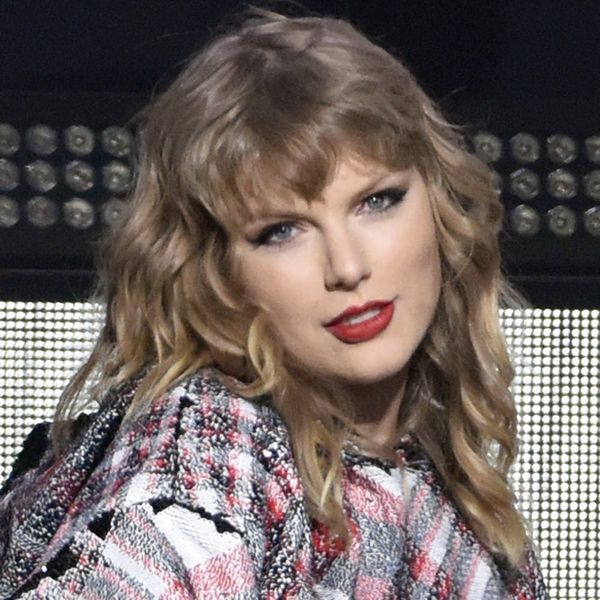 Taylor Swift dropped jaws around the world on Monday when she debuted her cover for British Vogue looking like a vampy goth. With her dark lips and fire-engine red YSL gown, Swift, 27, gave us her most couture look, well, maybe ever! And the shot, taken by Mert Alas and Marcus Piggott, was just a preview of things to come, with 11 more glammed-out pics to follow in the mag’s accompanying photo spread.

Lucky for us, the “Getaway Car” crooner is sharing some of the looks with us, all accompanied by lyrics from her Reputation album — a fitting move for the pop star, who also ditched a traditional interview for the piece in favor of a self-written poem titled “The Trick to Holding On.”

Inescapable I’m not even gonna try. And if I get burned, At least we were electrified.

Choosing lyrics from “Dress” for her first shot, the Grammy nominee captioned this pic herself in a black studded ruffle crop top with the words, “Inescapable. I’m not even gonna try. And if I get burned, at least we were electrified.”

I never trust a narcissist But they love me...

Deep blue, but you painted me golden.

Time’s co-person of the year also showed off the other side of the coin, however, looking sweet as could be in a glittery, Frozen-inspired frock, adding fitting lyrics from “Dancing With Our Hands Tied” that read, “Deep blue, but you painted me golden.”

Fans, for one, were LOVING the edgy shoot, taking to Twitter to sing its praises, dubbing it everything from “mature” to “a work of art.”

I love this photoshoot so much. #TaylorSwift #ReputationEra @taylorswift13 pic.twitter.com/KiACQsnWcL

THIS
IS
TAYLOR
ON
BRITISH
VOGUE
*FREAKS OUT IN PARSELTONGUE* pic.twitter.com/o26GYSrlP7

Taylor Swift is so hot in British Vogue shoots daaamn

There were, however, several that took issue with Swift as the mag’s second cover model under editor-in-chief Edward Enniful, who promised to bring more diversity to the outlet.

Taylor Swift as cover girl? The new Vogue might not be as forward-looking as we’d all hoped https://t.co/uKQJaeN1MR

“The new British Vogue will celebrate diversity which is why, for the first time ever, we’ve put a snake on the front cover.” https://t.co/tTK3sVOu3d

Edward Enninful said he was going to completely revamp British Vogue and make it more diverse and open.

Taylor Swift is this months cover. Aka the whitest white girl that ever lived.

I’m over Edward being editor already. Alexandra you can come back now.

What do you think of Taylor’s edgy pictorial? Share with us @BritandCo.

Nicole Briese
Nicole is the weekend editor for Brit + Co who loves bringing you all the latest buzz. When she's not busy typing away into the wee hours, you can usually find her canoodling with her fur babies, rooting around in a bookstore, or rocking out at a concert of some sort (Guns N' Roses forever!). Check out all her latest musings and past work at nicolebjean.com.
Celebrities
Celeb Style
Celebrities social media Taylor Swift twitter
More From Celeb Style