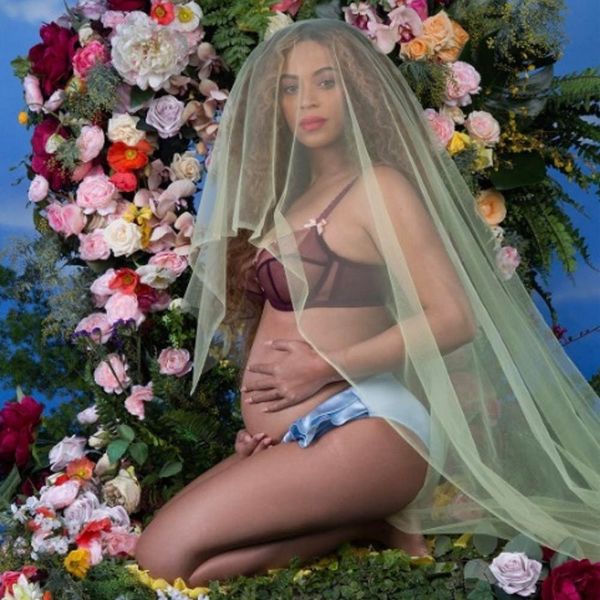 It’s been one week since Beyoncé announced that she’s having twins. The announcement featured a pic of herself wearing a maroon bra, silk powder blue bottoms and a green veil pulled over her head, surrounded by campy plastic flowers as she holds her belly in both hands. Epic as only Queen Bey could make it.

The photo had all the trappings to go down in pop culture history and was also ripe for memes… which is exactly what the internet did. We’re rounded up some of the best parodies/memes/copycats, because imitation is the sincerest form of flattery.

BEYONCÉ AND I ARE BOTH PREGNANT AS FUCK. MAZEL KWEEN. (@tank.sinatra @adam.the.creator)

Internet funnyman The Fat Jewish paid homage by recreating Bey’s photo (though it looks like his photoshopped hands are from Demi Moore’s famous pregnant Vanity Fair cover) and writing in the caption: “BEYONCÉ AND I ARE BOTH PREGNANT AS F*CK. MAZEL KWEEN.”

Ellen DeGeneres chimed in with her own version — which was pure gold.

And other folks were eager to share their bad cosplay versions as well.

Beyoncé ain't the only one expecting. pic.twitter.com/TfyIb7Kvo5

Others improvised with sticker flowers.

I mean, this side by side is gorgeous.

When mango season come and it has too many fruit flies. 🐝 😂 #beyoncétwins

When that veil is actually mosquito netting.

And others copied the pic very appropriately.

Even the furkids had to get in on the memes.

And furry puppets from the UK.

Well... you know... It is not my style but I'm happy to be able to meet the desire of a famous client! 🙃

Yes. Yes, there even is a Barbie version.

Of course we had to get in on the fun as well. Here’s our Chief Creative Officer Anjelika, who is due March 10 (!!), recreating the shot with a little help from our very talented Brit + Co creative team.

"Beyonce is not having twins. Period." pic.twitter.com/DCCwyDdK7z

Other folks poked fun at what’s happening in the political sphere.

"You act like Beyoncé is god or something"
Me: pic.twitter.com/ZDyxbEoVod

When it’s all Lion King up in here.

Others photoshopped pics from the rest of Queen Bey’s pregnancy shoot, including this parody of Michelangelo’s famous Sistine Chapel painting “The Creation of Adam.”

Meanwhile, some folks turned their attention to the photographer behind the camera.

@Beyonce 's Pregnancy Photos 🤰🏽💕
I tried. Only posting because this took 4 hours. pic.twitter.com/SE8vCuRJZJ

Some artists even got super creative with their Beyoncé tributes.

When JayZ planted them Seeds 😂 pic.twitter.com/aUTshPYUVB

And while this isn’t a recreation of Bey’s pregnancy portrait at all, you can’t leave Jay Z (or Salt Bae) out of this.

What do you think of Beyoncé’s pregnancy announcement? Tweet us @BritandCo!

Kimberly Wang
Kimberly Wang writes about all things pop culture, tech, style, and beauty. She's a Bay Area transplant and has an MFA in Creative Writing from Columbia University. On a sunny New York day, you can find her hanging out with her mini schnauzer Isabelle Jellybean on a blanket in Central Park.
Beyonce
Pop Culture
Beyonce Pregnancy Announcements
More From Pop Culture