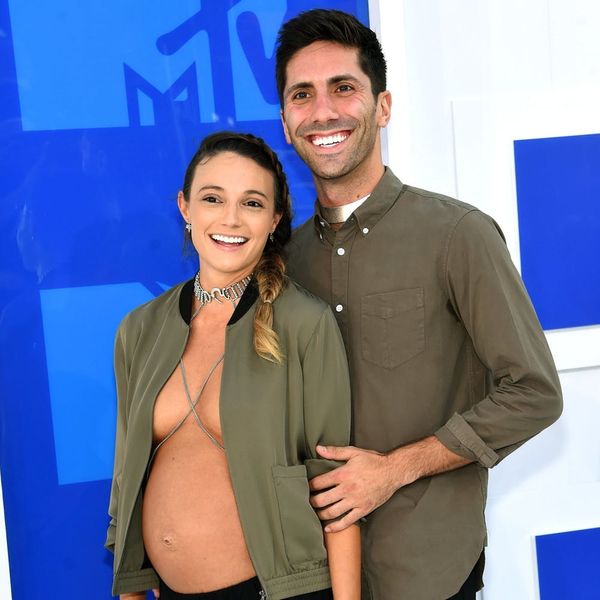 ICYMI, Laura Perlongo dominated the MTV VMAs red carpet last week. She’s the fiancée of Nev Schulman, host of the MTV show Catfish. And she showed up to the awards ceremony wearing a bomber jacket unzipped to reveal some cute body jewelry… and a super visible baby bump. It’s not that wild if you think about it: People dress provocatively for awards shows all the time! And people get pregnant all the time. So it only makes sense that the two should meet at some point. Except people could NOT. STOP. TALKING ABOUT IT. Which leads us to ask… why?

It’s a fact of life as a woman that your appearance will be judged. Sometimes it’s by others; many other times you observe and criticize yourself. Frustratingly for the people who find themselves there, this cycle often becomes even more extreme during pregnancy. Strangers feel entitled to gawk at a pregnant person’s body, judge their food and lifestyle choices, even touch their stomach without asking (yikes). Which is why it rules when pregnant folks reclaim their bodies, loud and proud… and why celebs doing so is actually a pretty big deal.

Last year Kim Kardashian West experienced an especially nasty form of this when a rumor cropped up that she was faking her second pregnancy. Beyoncé dealt with the same gossip, which she definitively put to bed with a home video clip in the Lemonade visual album of her smiling and waving bashfully at the camera, extended belly fully visible. Kim KW took to Instagram, one of her preferred communication channels, to share a selfie and a message to her detractors.

While pregnant people are out and about, it’s still kind of weird to see them in some places, or in some contexts. Take Kim’s selfie, for instance: It’s not really sexual, but a naked photo of a very pregnant woman? Especially one who’s known for celebrating her sexuality? It may not be unprecedented, but it’s definitely not common practice.

Meanwhile Blac Chyna, aka Angela White, aka Kim Kardashian West’s once bestie and future sister-in-law, just graced the cover of Paper‘s latest issue looking resplendent and way, way pregnant. It was reminiscent of Demi Moore’s 1991 Vanity Fair cover, but for a new generation: one that has begun to embrace, in media and the popular imagination, the beauty of women who aren’t thin and white. (That embrace unfortunately is not total.)

Always be yourself, express yourself, and have faith! 💕 Thank you @papermagazine #Cover #BeautifulPeople

Perhaps most impressive of all these is a lesser-known example of pregnancy in a very public arena. In 2009 British model Jourdan Dunn, then eight months pregnant, walked the runway for Jean-Paul Gaultier’s Spring-Summer 2010 show. Fashion modeling has always been the province of ultra-thin, almost always white women, making the presence of a pregnant black model a huge outlier. It may not exist in our collective memory in the way Kim K’s many pregnant selfies do, but perhaps this image of Jourdan modeling haute couture — customized to fit her pregnant body —should.

What are your fave unusual pregnant pics? Let us know on Twitter @BritandCo!

Tannara Yelland
Tannara is a freelance writer and editor, an occupation perfectly suited for her affection for drinking too much coffee and keeping odd hours. She usually writes about politics, economics, and pop culture. Some day she will put to use the hundreds of hours she's spent watching Say Yes to the Dress and write THE definitive analysis of the show.
Controversy
Celebrity News
Controversy Pregnancy