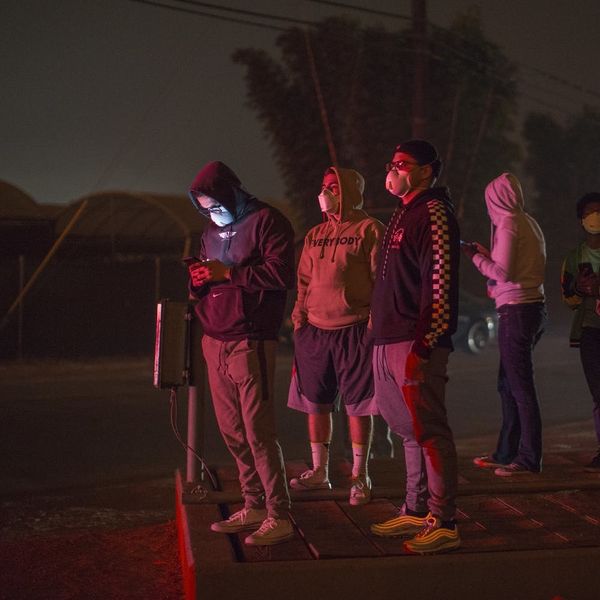 For the better part of this month, the Thomas wildfire has raged across southern California, forcing more than 100,000 people to flee their homes and becoming the largest wildfire in the state’s history. Officials say the battle is only now beginning to wind down, with earlier estimations suggesting that, in spite of the thousands of firefighters working tirelessly to control the blaze, the Thomas wildfire won’t be contained until after the new year.

But even after the fires die and the media directs its attention elsewhere, life probably won’t return to “normal” for evacuees anytime soon. Mental health experts say this year’s natural disasters — including Hurricanes Harvey, Irma, and Maria and the California wildfires — will likely have both immediate and long-term psychological effects on survivors. But that doesn’t mean the impact will surface as soon as the ash clears.

Thanks to our bodies’ fight-or-flight response during emergencies — the cocktail of hormones that helps us survive — we can often experience a lag in emotional response to trauma.

“In the immediate aftermath of a disaster, survivors may go into autopilot to better survive the crisis, to help them get out alive,” says therapist Adriana Alejandre from Porter Ranch, CA, just north of Los Angeles. “It is not until evacuees reach safety that most of the effects are noticed.”

Short-term mental health concerns related to fires and other unexpected, catastrophic events can vary widely, though most of them stem from simply trying to process the trauma and loss that occurred.

“Psychologically, survivors are trying to make sense of what has happened immediately after a natural disaster,” says Alejandre, who herself was impacted by the fires. In other words, it’s normal for those working through trauma and near-death experiences to feel anxiety, fear, mood swings, and depression — all of which can manifest in symptoms like nightmares, avoidance and dissociation (the state of being disconnected from the present), and difficulty making decisions.

Along the same lines, rebuilding after something traumatic — both literally and emotionally — can be profoundly emotionally taxing.

“Natural disasters are categorized as prolonged stressors due to what follows, like getting a new home, talking to insurances, finding a new job for some, a new school, rebuilding your life again. Although there may not be physical harm, the community takes an emotional toll,” says Alejandre.

Beyond the more typical emotional processing and rebuilding, some survivors may experience longer-term psychological effects like post-traumatic stress disorder, the most commonly-studied disaster health problem. Though all natural disasters carry with them the potential for mental health concerns, the absolute, destructive nature of fires causes a unique kind of trauma.

“Fires in an especially destructive and frightening natural disaster. The potential for loss is just so much greater,” Trautner says. “It can be very traumatic to come back to your house and find nothing but the chimney remaining. No other natural disasters are like that.”

Still, experts say that the mental health impact trauma survivors experience is widely variable and depends on an individual’s mental health history, whether or not they have a support system in place, and what exactly they experienced during a disaster.

“Many different types of exposure and levels of trauma can happen in the same larger event,” Dr. Rick J. Trautner, Medical Director of Mental Health Services for the Alta Bates Summit Medical Center, tells Brit + Co. “It’s been shown in the military in soldiers that have been traumatized in battle and have different types of trauma and reaction, including based on the types of injuries they suffer.”

Since PTSD is both characterized and exacerbated by the body’s response to triggers — say, driving through a neighborhood you once saw engulfed in flames or hearing about the fires constantly on the local news — continuing to live in the same city or region after a natural disaster can be problematic. But just as survivors’ unique histories and experiences influence their psychological response to trauma, they also affect whether or not survivors can envision themselves staying.

“Some people feel like they want to go back and recreate their life, but others feel like they can’t,” Trautner says. “These people want to put [the disaster] behind them and get away because it’s too disturbing to be re-exposed.”

Regardless of an individual’s response, mental health practitioners agree that seeking support is crucial for those who have experienced trauma. Reaching out to family and friends, seeing a therapist or primary care doctor, finding a support group, or connecting with a minister or priest can all be helpful tools in overcoming or dealing with the psychological effects of natural disasters, Trautner says.

To reconnect with one’s community and experience a new sense of meaning during times of struggle, he also recommends turning outward periodically: “Helping others deal with their own trauma can actually be a very helpful healing strategy,” he says.

Have you experienced a natural disaster? Tell us @britandco.