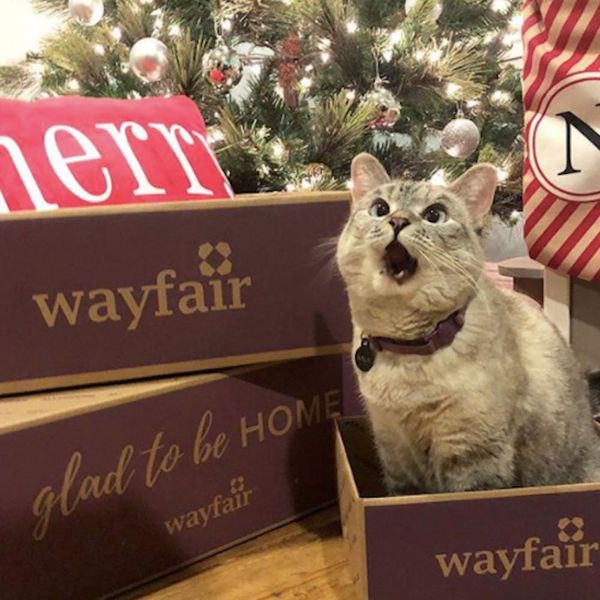 Move over, Selena Gomez! The “Wolves” singer might have been dubbed the human with the most Instagram followers in 2017 for the second year in a row, but she’s got nothing on the insanely cute animals of taking home top honors! The social media platform has released its annual data of the dogs, cats, and foxes (!) that followers can’t get enough of, and a scroll through the list is enough to warm even the coldest of hearts. But don’t take our word for it: Click to see for yourself!
Jiffpom, 7.1 million followers: It’s not hard to see why this little Pomeranian is breaking Instagram records as the animal with the most followers in the world — he’s starred in a Katy Perry music video, for Pete’s sake! This RL-looking teddy bear also just so happens to hold several Guiness World Record titles for his ability to run on his hind legs with blazing speed, and oh yeah, and did we mention he’s also insanely adorable? (Photo via @jiffpom)
Nala_Cat, 3.5 million followers: This former shelter kitty claimed top cat honors on the ‘Gram, beating out even Grumpy Cat, thanks to legions of admirers who can’t get enough of her playful spunk. With some of the biggest baby blues we’ve ever seen and a penchant for making expressive faces, Nala is a social media star, through and through. (Photo via @nala_Cat)
Doug the Pug, 3 million followers: Doug the Pug is so popular, he even has his own line of merch! His smushed-in face paired with the adorable costumes his owner dresses him in ( basics have nothing on Doug) make him (almost) top dog. Talk about star power! (Photo via @itsdougthepug)
Maru, 2.6 million followers: This Shiba Inu pup is an international sensation, flooding not only the feeds of those in his native home in Japan, but around the world. Owner Shijiro Ono keeps the cuteness coming with daily shots of Maru as he explores, plays, and sleeps. Just look at that grin! (Photo via @marutaro )
Grumpy Cat (AKA Tardar Sauce) 2.4 million followers: While she may not have the most followers in the world, we’d be willing to bet she just may be the most recognizable. Grumpy Cat hit it big with internet fame back in 2012 when her perpetually grumpy mug appeared on Reddit. Since then, she’s become a pop culture phenomenon, spawning her own line of wares and racking up a $64 million(!) fortune. (Photo via @realgrumpycat)
Marnie the Dog , 2.1 million followers: If Grumpy Cat is perpetually grumpy, Marnie, named for musician Marnie Stern, is exactly the opposite. A never-ending ball of sunshine, this 16-year-old Shih Tzu was adopted in her golden years at nearly 10 years old. Since then, it’s been happy trails for this NYC-dweller, who even regained her failing eyesight with a little TLC. (Photo via @marniethedog )
Tuna, 1.9 million followers: Tuna’s Instagram handle says it all. This “Chiweenie” not only has the cutest overbite you ever did see, he’s also a world traveler, chronicling his travels throughout the US and the UK on his blog, The Traveling Tuna. TBH, we’re not even worthy of this little nugget! (Photo via @tunameltsmyheart)
Juniper, 1.9 million followers: The next animal on our list isn’t your typical pet, but she’s a heartwarmer just the same. Meet Juniper: the “happiest fox.” A domestic fox (meaning her natural instincts were unintentionally bred out of her), she plays, sleeps, and cuddles just like a cat or dog — with an added occasional howl, of course. (Photo via @juniperfoxx )
Lil BUB, 1.7 million followers Like Doug, BUB has her own line of merchandise, but hers is extra-special, having been designed and manufactured by her owner. A portion of their proceeds also go to the American Society for the Prevention of Cruelty to Animals (ASPCA) to help rescue animals, like BUB herself, in need. It’s also super unique — where else are you gonna find a cat face like this one?! (Photo via @iamlilbub)
Loki, 1.6 million followers: This beautiful husky pup is not only incredible to look at himself, he’s also got some pretty sweet natural backdrops, thanks to his wanderlust-loving owners. You might catch this freebird wandering in the mountains, trudging through snowy banks, or pondering life by a gorgeous stream, but wherever he is, he shines. (Photo via @loki_the-wolf_dog )

Who’s your favorite Instapet? Tell us over @britandco.

Who’s your favorite Instapet? Tell us over @britandco.

Nicole Briese
Nicole is the weekend editor for Brit + Co who loves bringing you all the latest buzz. When she's not busy typing away into the wee hours, you can usually find her canoodling with her fur babies, rooting around in a bookstore, or rocking out at a concert of some sort (Guns N' Roses forever!). Check out all her latest musings and past work at nicolebjean.com.
Animals
Pop Culture
Animals Cats Dogs Instagram Pets social media