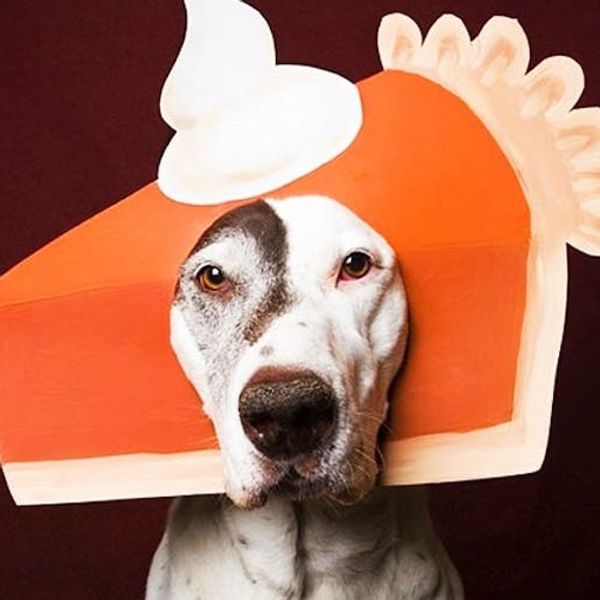 Halloweek is here, and we’re doing our darnedest to provide oodles of last minute inspiration for you all week long. On our list? Pet costumes, of course! You’ve seen the funny ones, the catty ones, the doggy ones, and even the underwater ones… but now it’s time to see EVERYTHING. Here are 100 classy costumes for all your furry friends.

How incredible is this? Who knew pugs could look so good in button downs? (via Underbite Textiles)

The toad charm is essential. (via Costume Works)

A Bunch of Grapes

Not sure this pooch is super psyched to be a bunch of grapes, but he looks insanely cute! (via Fuck Yeah Boston Terriers)

Brit + Co dog Turkey Temple was totally down with rocking a pair of glasses and bushy eyebrows. (via Brit + Co)

Taco cat is ready to give our little baby taco Elijah a run for the money. (via Petco)

Got two pups? The classic Batman and Robin duo is perfect for these dachshunds. (via Celebrity Dachshund)

Well, if that isn’t freaking adorable, we don’t know what is. (via Parade)

8. Miley Cyrus and Robin Thicke: And onto the pop culture segment of today’s program…! Dogs dressed as Miley Cyrus might be the best thing to come out of Halloween this year. The little buns push us right over the edge.

Because, why not? (via Pugstumes)

The force is strong with this one. (via Design Taxi)

The most important thing about this costume? The PROPS in the photo. What is that little chair in the background anyway?! (via Cosmoplitan)

Mr. T’s signature flat-top mohawk is key to this look. (via Buzzfeed)

This pooch is probably not psyched about the thimble hat, but this costume is pretty dang pin–worthy. (via Daily Mail)

I’m not sure this cat can actually walk around in the costume but it certainly makes a good photo opp. (via Costume Works)

On Halloween, cats are magically okay with water… right? (via BuzzFeed)

This dog came in like a wrecking ball and hit us hard with that goofy grin. (via Apartment Therapy)

The glasses are too much! And those shoes? Insane. (via SP Sweet Sunshine)

We don’t completely understand this costume, but you might say this cat is well-bread… er, bred. (via The Daily Weird)

How can you resist the hot dog pun? (via Costume Works)

Put a glittery mask on it and call it a day. (via Marie Claire Maison)

Wait, that dog LEGIT looks like an ewok! I might need to steal this Leia look and recreate this pair with Turkey. (via Brit + Co)

The detailed work on the piano alone is enough to make us swoon, but mostly we love that this dog parent created an entire tableau for their pup’s costume. The framed photo of Liberace’s partner is an especially solid touch. (via Brit + Co)

How timely is this? The whole scene is set so perfectly, we wish Thanksgiving was already here. (via Brit + Co)

Roaming the range (or at least the living room) just got a lot more thrilling. (via Cutest Cat Pics)

There’s just something about this photo, the fence, the painted orange legs, and the face on this dog that makes this the best Chia Pet costume we’ve ever seen. (via Brit + Co)

For the cat who truly acts like royalty, it’s payback time. (viaBuzzFeed)

Pipe cleaners as glasses and the lightning bolt scar? Genius. These well-coiffed pups would look right at home at Hogwart’s. (via Brit + Co)

Alien invader… Space cadet… We’re not exactly sure what this cat’s supposed to be, but we do know we’ve never seen a Chinese food carton look quite this awesome before. (via BuzzFeed)

We’ve gotta hand it to this new breed of dog costume that uses two-legged optical illusions. They make it look so real. (via Amanda Zumwalt)

This Japanese dog mom crocheted a unicorn mask for her pooch… and now we need one for every dog in America. (via Makezine)

Our hearts will go on. (via Apartment Therapy)

What Does the Fox Say?

We’re betting we know what this fox says. Woof! (via Brit + Co)

Is this made out of pup-er mache? (via Refinery 29)

How crazy is this? This costume is sort of hard to understand, and is so well done! It looks like a skeleton and mummy are carrying a pumpkin, and looking rather stylish while doing it. (via Brit + Co)

We see pride, we see power, we see a badass dachshund who don’t take no crap off’a nobody. (via Costume Works)

All you need is a witch and a wardrobe to make this costume even more amazing. Or a scarecrow and a Tin Man. Or a Rafiki… dang, how will you decide?! (via Instructables)

Feel free to make this your computer wallpaper. It’s that good. (via Apartment Therapy)

We’ve seen a lot of dog Star Wars costumes in our day, including a Death Star made from a protective neck cone… but this one is even funnier than that. (via Dressed Up Dog)

Grandmother didn’t stand a chance against this sweet, cuddly wolf. (via Costume Works)

Much like director Steven Spielberg, pugs are very versatile. (via Meek A Kitty)

Of course, we’ve gotta give props to the techie dog parents out there. (via Brit + Co)

When you put a bowl of glittery fruit on your cat’s head, she’ll be just as happy and enthusiastic as the original Miss Chiquita. (via Not So Kitty Shop)

If this was a person dressed up as Frida Kahlo, it’d be super chic and intellectual. But it’s a dog, and it’s hilarious. (via Apartment Therapy)

To the bat cat cave! (via BuzzFeed)

Ain’t nothin’ but a hound dog… and we’re crying with laughter. (via Refinery 29)

Where’s that lion from above? These little mongrels are gonna get him, and the little dogs, too! (via The Tin Man)

The real question is, where’s Wenda? (via Brit + Co)

How can you resist that adorable little snout? (via Cosmoplitan)

Costume this amazing is. (via Pug Costume Party)

A nod to one of Madge’s signature looks is just what your little pup ordered. (via Apartment Therapy)

Something tells us the Big Bad Wolf wouldn’t mess with this catty little Red Riding Hood. (via BuzzFeed)

A costume that requires you to lounge around on the grass? Winning. (via Brit + Co)

This dog costume that keeps on giving throughout the year. You can use this one on Halloween, Thanksgiving and Christmas. (via Refinery29)

The dog looks great but we’re more focused on that hot pink plane! (via Martha Stewart)

This corgi’s fire truck is LEGIT. (via Buzzfeed)
a

Okay okay, a cat can’t really cruise around town in this costume but… it’s great for a sleepy little feline. (via Laughing Squid)

Sometimes, the simplest DIY costumes are the best. (via Animals Tweeting as Owen Pallett)

Those flowing locks, that clamshell brassiere and that shiny green tail — we’d know Ariel anywhere! If you don’t want to DIY, you can buy a mermaid costume here. (via Washington Post)

Lady liberty is always a beauty, and Maya definitely does this gal justice. (via @maya_on_the_move)

But can they do the dance? (via Cosmopolitan)

That felt mane is too awesome! (via KO Couture)

This little rag doll looks pretty chill in her yarn wig. (via To Scarborough Fair)

Whether you buy or DIY, this costume is just begging for selfies. (via Playful Pup)

Center of the Universe

Because you think your kitty’s the center of the universe… or at least she think so. (via Not So Kitty Shop)

Boo! (via Maddie on Things)

72. Gator Dog ($20): This alligator costume is made to be comfortable for the pups, and this guy looks like he wants to wear it all year round. You could go Crocodile Dundee or Captain Hook with this one!

It’s a goat cat. That’s all you need to know. (via Flickr)

You can all us out for having one too many Miley costumes on this list but it’s impossible to choose just one! The paw print decal? Perfection. (via @maya_on_the_move)

I think I saw this dude at Zeitgeist the other day… ;) (via Buzzfeed)

here or here. (via Ensunsett)

Cue Royals by Lorde. (via The Guardian)

Because the concept of Sharknado isn’t absurd enough, let’s put it on a hat for a cat. (via Not So Kitty Shop)

This handcrafted costume is definitely a labor of love, and the results are gorgeous. (via Buzzfeed)

Or should we say… RoBUN? (via Cosmopolitan)

Take your pick — just make sure your pup doesn’t think that wig is a chew toy. (via Brit + Co)

The ears on this costume are as jumbo as this puppy’s face! (via Flickr)

A Pile of Leaves

This costume is ridiculous. We love it. (via Buzzfeed)

Love PSLs so much you just want to hug them? (via imgur)

The headpiece on this little turkey is what takes it to the next level. (via Her Campus)

The superimposed sunset background is the best part of this costume. (via Buzzfeed)

This canine bros make the perfect pair. (via imgur)

A donut salesman is now officially a Halloween costume. (via This Is Colossal)

One more lobster, this time with a fire roaring under the pot! (via Cosmopolitan)

Get matchy matchy by rocking your own Mad Hatter look alongside your pooch. (via Apartment Therapy)

Bonus points if your pup happens to have gray eyes as well. (via imgur)

We are very impressed. (via Cosmopolitan)

I wish we could see a pic of the doggie as a box of Thin Mints, but this costume is still a knockout. (via Martha Stewart)

Don’t cry for me Halloween-ahhh. (via Buzzfeed)

All aboard! (via Celebrity Dachshund)

Combine this one with the pug-nana and you’re good to go. (via PetSmart)

And finally, a hilarious pile of yarn spaghetti, styrofoam meatballs and a cool attitude. (via Cosmopolitan)
Anjelika Temple
As Co-Founder and Chief Creative Officer of Brit + Co, Anjelika Temple brings her voracious consumption of all things creative and colorful to DIY projects, geeky gadgetry finds and more. When she's not DIY-ing her heart out, you'll find her throwing dinner parties with friends or adventuring with her husband David, their daughters Anokhi and Indira, and their silly dog Turkey.
Halloween
Halloween Costumes
Halloween Halloween Costumes
More From Halloween Costumes