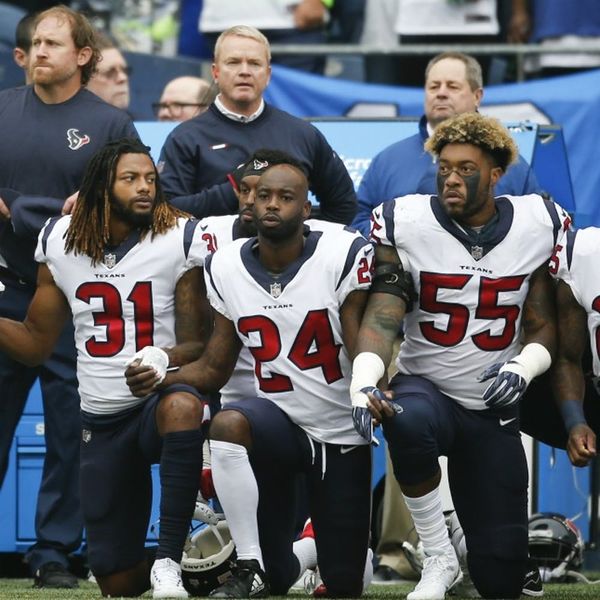 Thanks to still-unsigned QB and GQ Citizen of the Year Colin Kaepernick’s kneeling protests launched last year, the NFL has become a more socially motivated professional sports league. In the wake of more and more players taking a knee or not entering the field at all during the singing of the national anthem, league officials and a group of players have reached a tentative agreement to financially support social causes that help Black youth as well as other community-based activist causes supported by league players.

The Washington Post reports that late Wednesday night, the two sides of the league reached a tentative deal that will see $90 million dollars funneled into various community-based action groups between the final agreement date (to be decided) and the end of the 2022-2023 season. While the WP notes that this agreement may be a way for NFL owners to curtail the very public protests happening at the start of many games, the action may not be enough for all players.

The “Players Coalition” is a group of like-minded, socially conscious players, led by Philadelphia Eagles safety Malcolm Jenkins and former NFL wide receiver Anquan Boldin. The group was created to help players who felt pulled to social causes have a voice within the league, and while their discussions with team owners have yielded the financial backing of the NFL, two players have left the coalition in response to the agreement.

San Francisco 49ers safety Eric Reid and Miami Dolphins safety Michael Thomas announced they would be leaving the Players Coalition yesterday morning, citing a dislike of how talks were going between the groups. Reid played alongside and protested with his former teammate Kaepernick.

ESPN reported that Reid was also angry with Kaepernick’s removal from the Players Coalition, and that the $90 million promise should be seen as a compromise to dissuade players from continuing to protest. Jenkins disputed Reid’s arguments, however, saying that Kap’s removal from the coalition was voluntary as he wanted to better serve outside the realm of the NFL.

While this agreement is currently only tentative, it could become active as early as December.

What do you think about the NFL owner’s offer to Black athletes and their causes? Tell us @Britandco!