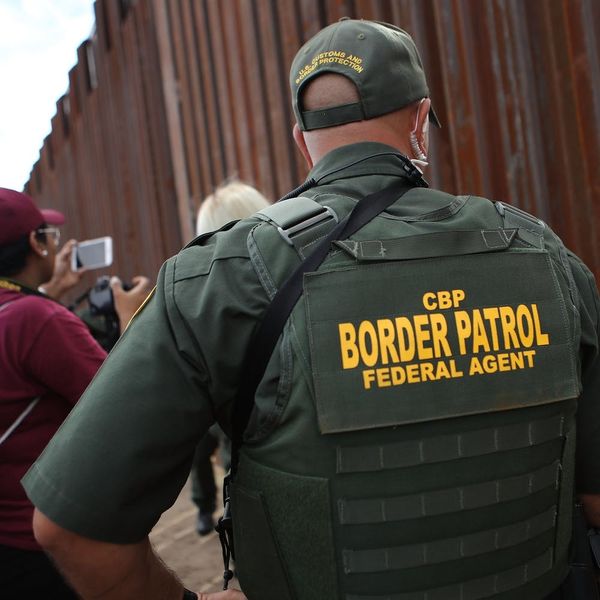 A seven-year-old Guatemalan girl is dead from dehydration and shock after she was taken into the custody of the US Border Patrol last week, according to a new report from the Washington Post. The young child and her father were among dozens of asylum-seekers and immigrants who arrived at the US-Mexico border in a remote area of New Mexico last week and were then taken into custody by Border Patrol.

After several hours in custody, the girl reportedly began to have seizures and was running a temperature of 105.7 degrees before she was air-lifted to Providence Children’s Hospital in El Paso, Texas, where doctors were unable to save her life.

A Guatemalan foreign ministry official identified the girl as Jakeline Caal, according to the Associated Press.

Nick Miroff, one of the Post reporters who broke the story, told NPR’s Morning Edition Friday that the child “had not eaten or had any water for several days.” And MSNBC correspondent Jacob Soboroff tweeted early Friday afternoon that an official with Customs and Border Protection told him the girl’s father notified Border Patrol agents that his daughter was vomiting a full hour-and-a-half before she received any treatment.

BREAKING: CBP official tells me Border Patrol agents transporting 7 year old Guatemalan girl who died were notified by her dad she was vomiting at 5AM.

She didn't get treated until bus arrived at a Border Patrol station at 6:30AM.

An hour an an half with no medical attention.

Many reports, including from the Post and NPR, say that the girl and her father crossed into the US “illegally,” seemingly repeating a DHS statement on the Jakeline’s death. But as Julian Castro, a Democratic representative from Texas, noted to NPR, the administration is making it impossible for all migrants and asylum-seekers to enter through designated ports of entry.

“By limiting the ability of folks to present themselves at the port of entry, the Trump administration is making it more dangerous for these folks,” Castro said.

DHS statement tonight on the death of a 7-year-old girl in Border Patrol custody: pic.twitter.com/FzC6VftKVe

The Department of Homeland Security is placing the blame for Caal’s death squarely on her father. BuzzFeed News immigration reporter Hamed Aleaziz tweeted a statement from the DHS, which reads in part: “Once again, we are begging parents to not put themselves or their children at risk by attempting to enter illegally.” But as Castro stated, it is simply not possible for everyone to enter at official ports of entry due to constraints enforced by the Trump administration.

Many of the people coming to the US are seeking refuge from perilous conditions in their home countries, and in any case, deserve to be treated like human beings and provided with proper care when they arrive in the US. Representative Castro also told NPR that there is no excuse Border Patrol can make for the fate of this young girl.

“I think it’s true that 163 people, for a small border patrol station, is a lot of people to deal with. But you would also think that you can identify someone who’s on the verge of death,” he said.

Further, Reveal immigration reporter Aura Bogado noted on Twitter that the detention cells where immigrants are held at the border (called hieleras, or “iceboxes,” by detainees because of their often frigid temperatures) are reputed to have unsanitary, and even dangerous living conditions.

“To claim that Border Patrol regularly serve food and water to people in hieleras is a serious stretch of reality and it indicates to me you don’t talk to people about hieleras and rely instead on what the administration is telling you. Hence your narrative,” she wrote.

Bogado also tweeted a photo of a Border Patrol cell featuring a toilet with a built-in sink that also is intended to serve as a fountain for drinking water.

Here's a cropped @jbmoorephoto from a hielera. This is the water people are forced to drink. It's grey and it's disgusting. It routinely makes people sick. There isn't even a place to dry your hands after you wash them. Everything is full of fecal matter. pic.twitter.com/VrdqjiBO1P

Immigrant Justice Now (formerly known as Families Belong Together), a grassroots organization that has helped mobilize concerned citizens around the Trump administration’s “zero tolerance” policy of separating children from their families at the southern border, says that they are “mulling a response” to Caal’s death.

We are mulling a response to this latest tragedy.

Rest assured this will not stand. https://t.co/7GWoME1Tv6

The DHS says that it is launching an investigation into the girl’s death, which Castro told NPR should reveal whether or not the girl or her father asked for food, water, or medical attention for Jakeline. However, DHS secretary Kirstjen Nielsen has been known to be less than forthright about the actions of the DHS. When news broke of family separations at the US-Mexico border over the summer, Nielsen stated on Twitter, “We do not have a policy of separating families at the border. Period.” By now, we know that multiple ACLU lawsuits, investigative reports, and testimonials from asylum-seekers and migrants have confirmed the administration’s family separation practices.

Jakeline Caal is not the first child to die in immigration detention this year. Mariee, a 19-month-old baby who was taken into ICE custody with her mother, died from an infection she apparently acquired while the baby and mother were detained by ICE in March. The baby died about two months after she and her mother, 21-year-old Yazmin Juárez, were released from detention. Juárez is suing the United States government for $60 million for the wrongful death of her baby and says that her child was not sick when they were taken into ICE detention. Investigative reports have revealed a pattern of allegations of severe medical neglect and abuse in ICE detention centers.

CORRECTION: An earlier version of this article misspelled Jakeline Caal’s first name as “Jackeline.” We regret the error.

Elizabeth King
Elizabeth King is a politics, history, and culture writer based in the Twin Cities. She is generally pretty cranky but still enjoys traveling, music from the early 2000's, and plotting the resistance. Feel free to say hi on Twitter at @ekingc or check out some of her work at www.elizabethcking.com.
Controversy
Current Events
Controversy Immigration