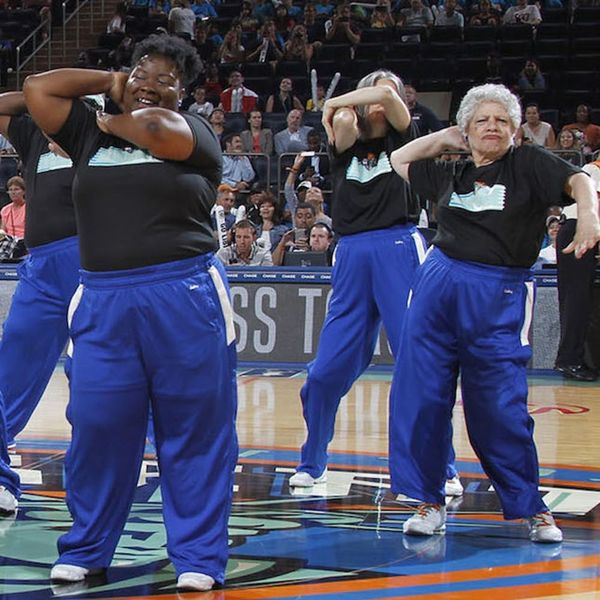 In recent years, progress has been made to be more inclusive of all body types and races in fashion, beauty, entertainment and more — but it’s still not often that we see a range of ages included across the board. That’s why it was so exciting to see 41-year-old gymnast Oksana Chusovitina compete in the 2016 summer Olympics, and why so many celebrated Calvin Klein’s inclusion of 73-year-old Lauren Hutton in their latest underwear campaign.

When we do get to see older people staying young at heart, it can be empowering. They’re good reminders that aging shouldn’t mean limiting how you live your life. It’s why we’re also totally smitten with the Timeless Torches, the official dance troupe for WNBA team The New York Liberty.

The minimum age to try out for the Torches is 40, and this year, their oldest member is an inspiring 77 years young. Since making their debut in 2005, the Timeless Torches have become a staple in not only in the league, but the city — over the years, they’ve made countless headlines and even made a special guest appearance on NBC’s 30 Rock. As Melissa Unterstein, the Director of Dance and Performance Teams NY Knicks and NY Liberty, tells us, it’s important that people are exposed to the inclusivity that the troupe represents.

“The Timeless Torches are an amazing group of inspiring men and women who continue to push the boundaries,” she tells Brit + Co in an email. “Their passion, enthusiasm, and dedication to their craft, their team and to their city, is contagious!”

The Timeless Torches cover a wide variety of music and dance genres, led by Coach LaToya’s choreography. Their training and performances help many of the team members stay fit not only physically, but mentally too.

“I’ve heard that movement you enjoy, combined with the challenge of learning choreography, actually rewires the brain in a beneficial way,” says Sylvia Chappell, who just joined the Torches this year.

Chappell decided to audition not only because she was a fan of the Liberty and the Torches, but because she herself had recently gotten back into two of her younger days’ passions — basketball and dancing. “I always admired how this group of people my age and older got out there and rocked the house,” she tells Brit + Co, admitting that she jumped up and down like a kid when she got the call that she’d made the team. The team veterans, who have to re-audition every year, welcomed the newbies warmly into the family, she says.

When asked why she thinks it’s important for people to see an age-inclusive group like the Timeless Torches, Chappell says that it encourages people to stick with their passions no matter their age — but that it also helped her, and could help others, overcome fears and self-doubt.

“In my teens, twenties, and thirties, I was concerned about how I looked and what people would think about me,” she says. “Now later in life, I’m a much better dancer and happy to contribute to this team. It’s less about how I look and more about how WE look.”

Chappell says she’ll never forget her first performance at the Liberty season opener at Madison Square Garden. The team’s veterans (who have to re-audition every year) welcomed the newbies warmly, and the audience loved their routine.

“What a HUGE lift to dance in front of several thousand cheering fans,” she says. “It was absolutely amazing, feeling all that support and love.”

Chappell hopes to inspire others the way the team inspired her. She says: “I look forward to being a ‘Torch’ that inspires others to let their lights shine!”

Do you know someone who stays young at heart? Let us know @BritandCo!