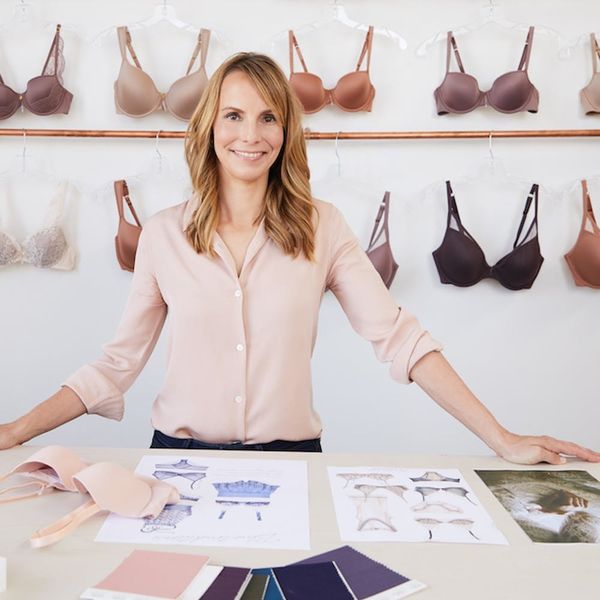 Great ideas are often born from a great need. Whether it’s a fun, flirty date night top that inspires a fashion brand, a desperate search for an ideal nail salon, or shopping for the perfect wedding dress that launches a custom-designed gown company, female entrepreneurs are taking inspiration for everyday experiences. In this week’s How to Quit Your Day Job series, we chat with Heidi Zak, the co-founder of ThirdLove, an online bra and underwear brand that launched after Zak struggled with ill-fitting bras for far too long.

A former Google and Aéropostale executive, Heidi Zak took her tech and retail skills and built her bra and underwear brand with women’s needs first. After Victoria’s Secret CMO Ed Razek threw shade at the startup, Zak took out a full-page ad in the New York Times to pledge her company’s loyalty to designing garments for women by women. Since launching in 2013, ThirdLove offers 74 sizes, including half-cup sizes, and Zak was named on Fortune’s40 Under 40 list.

New York Times Sunday, full page letter from @heidi to @victoriassecret - Dear Victoria’s Secret, I was appalled when I saw the demeaning comments about women your Chief Marketing Officer, Ed Razek, made to Vogue last week. As hard as it is to believe, he said the following: “We attempted to do a television special for plus-sizes [in 2000]. No one had any interest in it, still don’t.” “It’s like, why doesn’t your show do this? Shouldn’t you have transsexuals in the show? No. No, I don’t think we should. Well, why not? Because the show is a fantasy.” I’ve read and re-read the interview at least 20 times, and each time I read it I’m even angrier. How in 2018 can the CMO of any public company — let alone one that claims to be for women — make such shocking, derogatory statements? You market to men and sell a male fantasy to women. But at ThirdLove, we think beyond, as you said, a “42-minute entertainment special.” Your show may be a “fantasy” but we live in reality. Our reality is that women wear bras in real life as they go to work, breastfeed their children, play sports, care for ailing parents, and serve their country. Haven’t we moved beyond outdated ideas of femininity and gender roles? It’s time to stop telling women what makes them sexy — let us decide. We’re done with pretending certain sizes don’t exist or aren’t important enough to serve. And please stop insisting that inclusivity is a trend. I founded ThirdLove five years ago because it was time to create a better option. ThirdLove is the antithesis of Victoria’s Secret. We believe the future is building a brand for every woman, regardless of her shape, size, age, ethnicity, gender identity, or sexual orientation. This shouldn’t be seen as groundbreaking, it should be the norm. Let’s listen to women. Let’s respect their intelligence. Let’s exceed their expectations. Let women define themselves. As you said Ed, “We’re nobody’s ThirdLove, we’re their first love.” We are flattered for the mention, but let me be clear: we may not have been a woman’s first love but we will be her last. To all women everywhere, we see you, and we hear you. Your reality is enough. To each, her own. -Heidi @heidi

Heidi Zak: The fewer decisions I have to make in the morning, the better. Every night, I lay out my outfit for the following day. All I have to do in the morning is get dressed and head out the door without standing in front of my closet trying to decide what shoes to wear with which outfit. The same night-before rule goes for my bag and my kids’ outfits and backpacks. The last thing I want to do when I’m running out the door is to try to remember everything we all need for the day. It’s so much faster to grab and go!

I also love to get my workouts in before heading to the office in the morning. I used to try and make it to a class, but as a mom of two kids, and a co-founder and co-CEO, that wasn’t realistic. Buying a Peloton bike, and most recently a Peloton Treadmill, completely cut out the stress of rushing to the gym to get a workout in. Bringing my morning workouts to the living room helps me stay energized all day.

B+C: What inspired you to start your company?

HZ: I was getting ready for a holiday party in 2012 and the bra I was planning to wear was so uncomfortable. It was the eleventh hour and I had two options: Head out to the store to try on dozens of bras or stick with the ill-fitting option I already owned. It was a choice between bad and worse. I wanted a third option. ThirdLove is just that: a modern brand women can really relate to, high-quality bras in over 75 sizes — twice the amount of the average bra brand — and an easy way to find your fit via FitFinder, which over 12 million women have completed.

B+C: How do you challenge yourself as an entrepreneur?

HZ: I try to stay focused on the three things that matter most as a CEO: setting strategies, hiring the right teammates, and creating the right culture.

B+C: Tell us about how your family and friends help support your business.

HZ: I founded ThirdLove with my husband, David Spector, and we are still co-founders and co-CEOs of the business. Having a co-founder was a huge advantage when it came to making it through all the peaks and valleys we experienced. It’s a bonus when it’s someone you trust completely, like a partner. Dave and I temper each other. We’re very different in some ways, but it works because we balance each other out. And that’s a really important aspect of running a company together.

Dave always pushes me to do more and be better — and he would say the same about me. He’s also the type of person who doesn’t take no for an answer. There were definitely low points for us in the early days when I thought, “We’re never going to be able to close this round. We’re going to run out of money.” And he kept saying, “We’re going to do this.”

It took more meetings, more pounding the table, more pushing through people telling us no. And I can say honestly if it had just been me doing this, I probably wouldn’t have made it through. It’s a great support system that works for us, and I wouldn’t have it any other way.

With an office like this, coming back to work after the holidays isn’t so bad. #BackToWork #TeamThirdLove #BoobWall #NewYearNewGoals

B+C: What have you’ve learned from a failure or mistake you made?

HZ: Being from outside our industry with a lot of naiveté, we started off manufacturing in a highly inefficient manner. For a tiny team with little resources, we took on way too much with an overly ambitious made-on-demand line. Right before we ran out of money and lost it all, we painfully pivoted our supply chain and manufacturing line based upon what we had learned. Today, we produce hundreds of thousands of bras a month, so the lowest moment in my career proved to be the most meaningful.

HZ: When I asked Laurie Ann Goldman, the former CEO of Spanx and an investor in ThirdLove, “When is the right time to let somebody go?” She simply said: “The first time you think about it.”

Yesterday, our Co-founder and Co-CEO @davespector visited ThirdLove's Chico office to help receive over 7,000 more bras to donate to those who've been impacted by the Camp Fire. At the holiday party that evening, we were reminded by the love and appreciation for our efforts that all our offices have a shared purpose — to be there for women in all their life moments, especially during the most difficult ones. #TeamThirdLove #Donate #DoGood

B+C: What do you love about your job?

HZ: I get notes from all kinds of women, some of whom are in their 70s, who are thrilled that they are wearing a bra that fits for the first time in their lives. It drives home how important our mission is to women of all shapes, sizes, and ages. I want to create a perfectly fitting bra for every body, and we are just getting started.

Once again for all the women in the back! We're here to serve all shapes and sizes, and make the most important item you wear the most comfortable one. #BrasForEveryBody #ThirdLove

B+C: Name two female heroes who you think should get a shoutout.

HZ: Kristin Lemkau, CMO of JP Morgan Chase. I love the campaign she developed with Serena Williams and her focus on advertising to the female, younger generations.

B+C: If you could tell aspiring creative women anything, what would it be?

HZ: Do something you’re passionate about and always be networking.