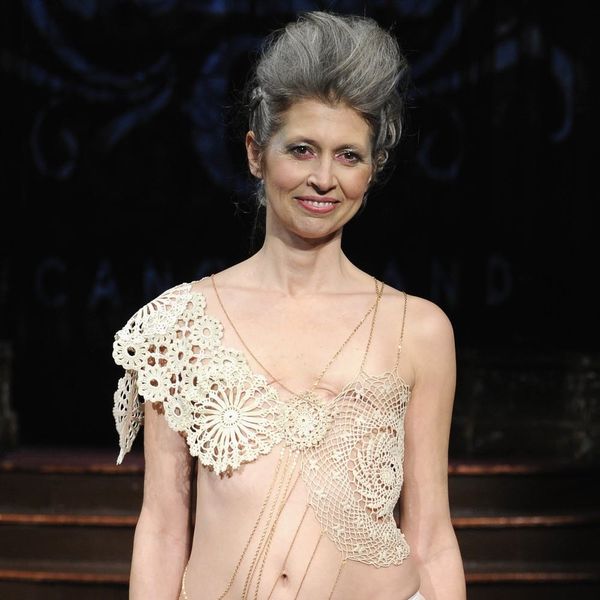 Lingerie has come a long way in the last 100 years (no, but really, check out its transformation), and one of the major changes that we’ve seen is that its gotten a LOT more inclusive. From Lonely Label’s body positive campaign to Naja’s new “nude” shades for all skin tones, companies have made major strides in making sure *all* women feel pretty in the skivvies they’re in.

One company in particular, however, AnaOno, just made a historical showing at NYFW with its lingerie line made especially for a group of women that is often overlooked when it comes to intimates — breast cancer survivors.

Founded by Dana Donorfree, who is herself a survivor, the collection includes items specially designed for those who have undergone mastectomies or lumpectomies. As Dana told BuzzFeed, “I had to remove both my breasts, and decided to rebuild them, and I wasn’t prepared for how dramatically my body was going to change. I cried a lot in lingerie dressing rooms after cancer.”

So? She decided to do something about it. Launching her line back in 2014, she created intimates that not only avoided pain points, such as grating underwire, but added special features, like hooks for drainage tubes or deep-cut armholes for incision scars.

What’s more? Dana both runs her products by real-life survivors and uses survivors exclusively as her models — both on the site and the runway. In fact, the 16 models that walked in the most recent NYFW showing were all members of that group, with many feeling emboldened enough to go either topless or strip down mid-runway (another first for NYFW). 100 percent of the show’s proceeds went to #Cancerland charity.

What has been your favorite part of NYFW? Let us know over @BritandCo.

Nicole Briese
Nicole is the weekend editor for Brit + Co who loves bringing you all the latest buzz. When she's not busy typing away into the wee hours, you can usually find her canoodling with her fur babies, rooting around in a bookstore, or rocking out at a concert of some sort (Guns N' Roses forever!). Check out all her latest musings and past work at nicolebjean.com.
Body Positive
Style News
Body Positive lingerie Womens Health
More From Style News