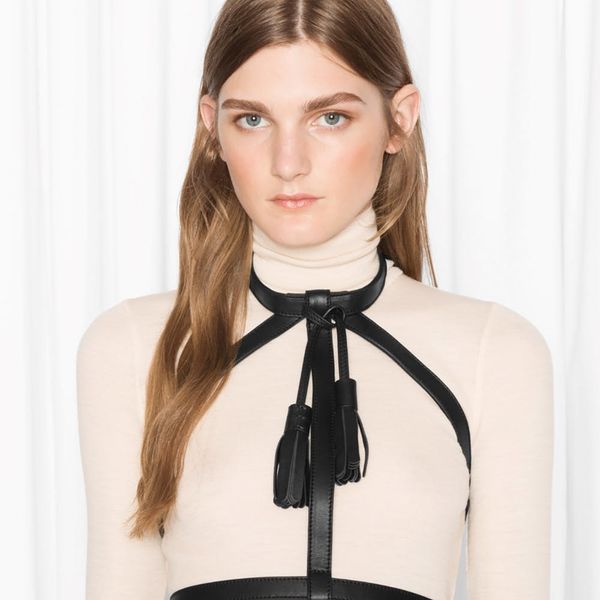 It’s not super common for a movie to spark an entire fashion craze, but we’re going to pin the recent mainstream shift of BDSM-inspired pieces as street wear on the Fifty Shades of Grey franchise. Prior to Anastasia and Christian’s romance, leather harnesses were a rather niche market. Now they’re being rocked by celebs as preppy as Taylor Swift. Piggybacking off the wider acceptance of the look, & Other Stories (H&M’s cousin) has teamed up with indie designer Zana Bayne on a collaboration that will have you throwing leather over your fall sweater in no time.

Zana Bayne is a New York-based brand which specializes in leather goods that, let’s just say, Christian probably would be a fan of. In its purest form, Zana Bayne’s pieces feature S&M and punk-inspired aesthetics. Some can be a bit intense if you’re just getting on board with the trend. But that’s where & Other Stories comes in.

The Swedish company is known for an understated and minimal vibe. Put the two together and you get harnesses that can be flawlessly incorporated into a fashion girl’s winter wardrobe. In fact, they look a little less BDSM-inspired and more like something you might find on a modern-day female warrior.

There are three different styles to choose from, which range from $125-145. If you’re not sure what to pair the accessory with, the collab has you covered there as well. In addition to the three leather pieces, there are nine garments designed by the two brands to complement the accessory.

Call us fashion sheep, but this racy trend is looking pretty good right about now.

(Photos via & Other Stories)

Cortney Clift
Cortney is the senior writer and special projects editor at Brit + Co. She typically covers topics related to women's issues, politics, and lifestyle. When she's not buried behind her computer you'll find her exploring New York City or planning her next big adventure.
Trends and Inspo
More From Trends and Inspo