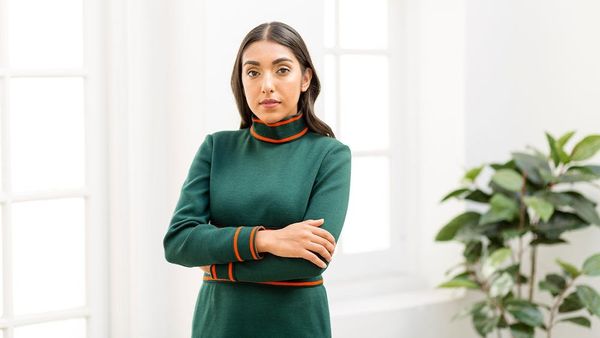 brought to you by Brit + Co

“2017 was kind of the year of women. We’re taking over spaces, changing systems and institutions, and literally changing the world.”

Rupi Kaur is not the poet you learned about in English Lit; more likely, she’s the girl who sat next to you. The best-selling author only just celebrated her 25th birthday, but she’s already turning one of the world’s most established art forms on its head.

The Punjabi-Canadian poet’s 2014 debut, Milk and Honey, has been on the New York Times best-seller list for 85 weeks now, selling over two million copies in more than 25 languages. This October, Kaur released The Sun and Her Flowers, a much-anticipated collection that mirrors the neatly arranged poems and hand-drawn illustrations of its predecessor.

Instead of cannibalizing one another’s success, Kaur’s creations have found a way to excel simultaneously. Currently, The Sun and Her Flowers sits at number one on the best-seller list, with Milk and Honey following directly behind.

Clearly, something Kaur is doing has staying power. So what is it about her work that has her audience – many of whom wouldn’t even call themselves poetry buffs – not only staying engaged online, but actually going out and buying copies?

“This is something that I’ve been trying to understand also for so long,” she tells me when we meet up in San Francisco. “I think I have to go back to myself. Why am I so driven? Why does it give me so much life? I think it’s like I’m so deeply exhilarated when I can read something, and by the time I reach the last line, it kicks me in the stomach, and my stomach turns, and I’m like, whoa. I kind of see my entire life flash before my eyes.”

Maybe Kaur’s emotional exhilaration is the secret ingredient that keeps her readers coming back. Kaur’s work is laden with drama, even the pieces that are only a sentence or two long. One reads, “on the last day of love/ my heart cracked inside my body.” Another ends, “do not look for healing/ at the feet of those/ who broke you.”

Her poems also cover issues that are ultra-relatable to her audience, one that hasn’t been heavily catered-to in the poetry realm: millennial women. Dealing with topics like sexual abuse, femininity, immigration, and heartbreak, Kaur’s work takes on issues that many young women can intimately identify with. She might not be as deeply layered as Shakespeare, but Kaur has undeniably struck a chord.

Kaur’s writing has the added benefit of being short and easy to understand, making it all the more welcoming to someone who has perhaps never picked up a book of poetry before.

“I make a very conscious effort of using diction that is easily accessible,” she says. “I want readers to do the emotional labor, not the actual labor of, like, popping open a dictionary and having to figure out what everything means.”

Instead, Kaur’s talent lies in taking that messy life experience you may have also gone through, or are having now, and wrapping it into a package that feels like it was meant just for you.

As you might expect from a 25-year-old, Kaur is heavily present on social media, Instagram being her primary medium. In many ways, this audience has been pivotal to her success. There, her short, illustrative poems fit right in with the aesthetically pleasing, inspirational content that saturates the social platform.

But like anything involving the internet, her online following has also caused her a fair amount of criticism. Like poets Warsan Shire, Cleo Wade, and Nayyirah Waheed (who has collaborated with Beyoncé), Kaur uses Instagram to share snippets of her work and curated photos of her life with her 1.8 million followers. Unfortunately, it also means she receives the often patronizing label of an “Instagram poet.”

What does that mean though, really? When I broach the topic with Kaur, she sighs. It’s immediately obvious that this is something she’s tired of talking about. But instead of brushing over the label she has begrudgingly been associated with, Kaur dives right in.

“You have these gatekeepers of these two worlds [poetry and the internet] who don’t really get each other, and they’ve never had to confront one another,” she says. “Then somebody like me or all the other wonderful poets and writers that are using Instagram today are forcing them to do so. It’s so early in the game that they’re like, Whoa, whoa, whoa. What is happening? If it’s on Instagram, is it real? If it’s not on Instagram, is it more authentic? There’s like this sort of confusion happening.”

If anyone is going to create new rules, it’s Kaur. For the release of The Sun and Her Flowers, Kaur hosted a red-carpeted premiere more akin to something you’d see for a Hollywood film than a book launch party.

Instead of book signings, she went on a 14-city sold-out tour where she performed her poems in costume on a designed set with music and curated lighting. Kaur puts on a show, not a reading.

Personally, it’s been a good year for Kaur. But as is obvious through the themes in her new work, she can identify with some of the turbulence women have faced in 2017. Despite that, Kaur remains optimistic.

“2017 was kind of the year of women. We’re no longer asking for permission to be seen or heard. We’re taking over spaces, changing systems and institutions, and literally changing the world,” she says.

In that concise, powerful style she’s famous for, Kaur adds, “When women rise, we all rise.”