This Is the Reason Why People Stay in Unhappy Relationships 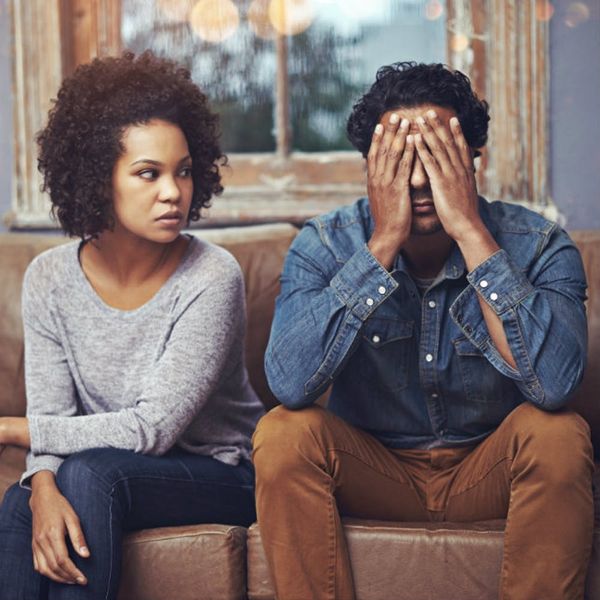 We’ve all been there: sitting across from a friend, listening to them talk about the latest fight with their S.O. and totally seeing that it’s just time for them to call it quits on their toxic relationship. But from the other side of the table, even those of us who have been lucky in love know the tension of choosing whether or not to try to save a relationship that feels increasingly beyond repair.

It turns out that there’s a logic to this common dilemma — and, more importantly, a scientific explanation for the fact that so many people choose to stay in their relationships, even when they’ve turned sour. Interestingly enough, the rationale for this behavior is rooted in a psychological theory often linked to economics. According to a recent academic study from a university in Portugal, published in Current Psychology, our resistance to breakups can be attributed to the “sunk cost effect.”

The sunk cost effect is at play when we stick with one option even though we know there are plenty of better options available to us, simply because we’ve already made “investments” into the original, not-so-great (at least anymore) option. What happens when you treat yourself to a girls’ getaway weekend, but when you show up at your destination, it’s raining, the food is bad and everyone is fighting? Most likely, you stay, even if changing your flight and going home sooner sounds a lot more pleasant. That’s the sunk cost effect in action. You’ve already invested money and effort into the trip, so you’re probably going to see it through, even if it ends up being totally mizz.

The university researchers in Portugal wanted to find out if these principles are to blame for the disconcerting number of people who stay in their unhappy relationships long after it’s become obvious that breaking up is a better alternative. To do so, they conducted two experiments.

THE EXPERIMENTS: DOES THIS IDEA ACTUALLY INFLUENCE RELATIONSHIPS?

In the first experiment, more than 900 participants were asked to read a relationship-related scenario and respond if they would stay in or leave the relationships. All of the relationships described in the scenarios were unhappy ones but involved various levels of investment in terms of time, money and effort. Interestingly, the results showed that a time investment was unlikely to affect a person’s odds of sticking around — participants were equally likely to stay in their hypothetical relationship if that relationship had lasted one year or 10 years. Investments of money and effort (meaning that you’ve put lots of energy into improving things with your S.O.), however, proved to make participants significantly more likely to try to make things work.

The second experiment sought to figure out if there was more of a connection between the duration of a relationship and the tendency to stay together than the first experiment let on. Nearly 300 participants received a description of an unhappy relationship, but half of the participants were told that they’d been with their fake partner for one year, while the other half had been together for a decade. Based on the description, participants were then prompted to say how much more time they would be willing to invest in the declining relationship. In this case, the length of the relationship had a notable effect — participants in the one-year group would commit another 289 days, on average, while participants in the 10-year group would commit, on average, an additional 584 days. Whoa. That’s a lot more time either way.

STAYING ABOVE THE SCIENCE

So what does this all mean? These results demonstrate pretty obviously that we’re often a little too willing to overlook the bad state of a relationship simply because we’ve made financial and emotional investments. Psychologists have long considered the sunk cost effect an irrational basis for making decisions in other contexts, and as it relates to love, we’d have to agree. If a relationship is unhealthy, you’re not going to magically make up your investments simply by seeing it through to the end. In fact, you’ll probably find yourself further depleted and unhappy.

To put this science to work, we suggest that you take stock of your “investments” into the relationship if you find yourself considering a breakup. What kind of time, money and effort have you given your S.O., and to what extent are those losses holding you back from getting what you deserve in a happier romance? Be aware of how the sunk cost effect might be influencing your decision, and remember that you don’t need to force a bad situation just because your brain wants you to hold on tightly to those so-called investments.

Do you think the sunk cost effect may have influenced your decision to stay in an unhappy relationship? Tweet us @BritandCo!

Alli Hoff Kosik
Alli Hoff Kosik is a freelance writer who is passionate about reading, running, rainbow sprinkles, her lipstick collection, watching embarrassing reality TV, and drinking pink wine. She lives in Brooklyn with her husband and (in her dreams, at least) three golden retriever puppies. Listen to her talk books on The SSR Podcast.
science
Relationships
science