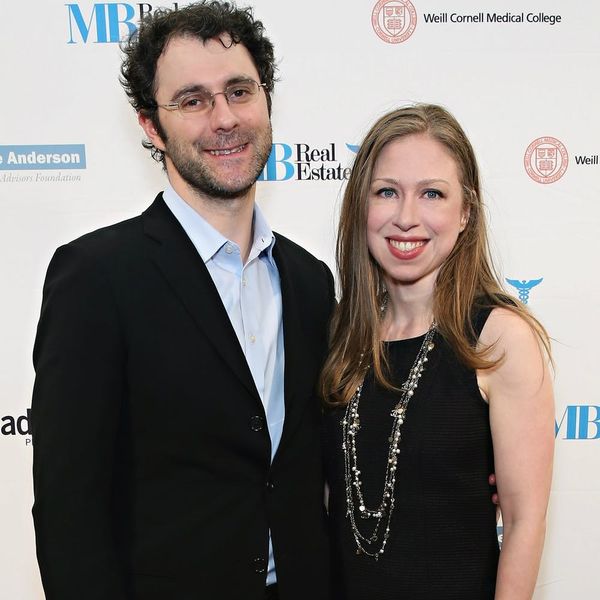 Congratulations are in order for Chelsea Clinton and husband Marc Mezvinsky, who welcomed their second child into the world today.

Chelsea announced her pregnancy via Twitter back in December, when she shared the news that her daughter Charlotte would soon become a big sister. Taking to Twitter once again, Chelsea not only announced her precious new arrival, but revealed his name as well:

Marc and I are overwhelmed with gratitude and love as we celebrate the birth of our son, Aidan Clinton Mezvinsky.

What a handsome name, indeed! We think Carrie Bradshaw would approve too, Chels (we can’t speak for Big)!

Grandma and presidential hopeful Hilary Clinton, who recently became the first woman to be nominated by a major party, retweeted Chelsea’s news and released a joint statement to E! with Bill in which they said, “We are overjoyed to be grandparents again with the arrival of our grandson, Aidan Clinton Mezvinsky… We are all over the moon as Chelsea and Mark welcome Charlotte’s little brother to the world and grateful for our many blessings.”

What an exciting year this is turning out to be for the Clintons! Best wishes for them and their new addition.

What do you think of the couple’s choice? Let us know over @BritandCo!

Nicole Briese
Nicole is the weekend editor for Brit + Co who loves bringing you all the latest buzz. When she's not busy typing away into the wee hours, you can usually find her canoodling with her fur babies, rooting around in a bookstore, or rocking out at a concert of some sort (Guns N' Roses forever!). Check out all her latest musings and past work at nicolebjean.com.
Celebrity Baby
Entertainment
Celebrity Baby Celebrity Baby Names