This Is Us Season 1, Episode 18 Recap: Moonshadow 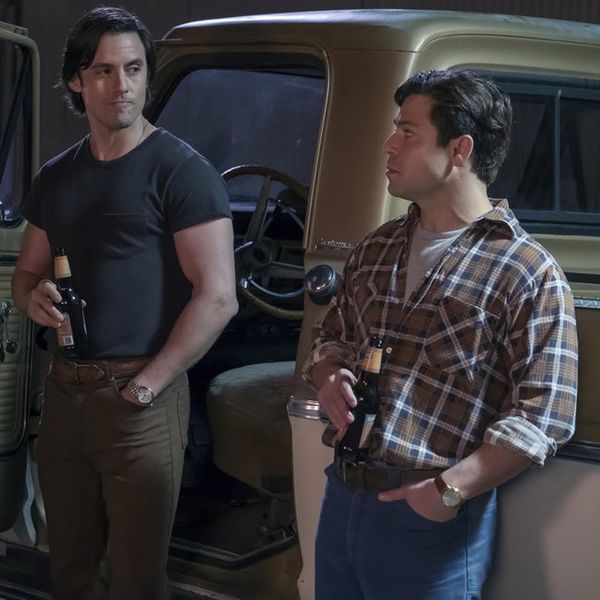 This is it, everyone. This Is Us. This is where the crying stops. I mean, okay, we have more seasons of This Is Us to look forward to when the show returns, but as of tonight, we’ve reached the end of season one, and with it, the Pearson family story — for now.

We begin where we left off last week, with tipsy (!) Jack driving to Rebecca’s gig after a talk with Kate and promising her he’d fix stuff with her mom. And from there? It’s a 28-year-old clean-shaven Jack that we meet, a Jack freshly back from Vietnam who is doing mechanic work for sweet old ladies like Mrs. Peabody, who want to set him up with a nice girl. Meanwhile, in pre-Jack world, Rebecca is having dinner with her friends who are getting married. Her friends want to know who she’s bringing to a wedding, but Rebecca has no interest in being set up. Her singing career is taking off! She’s totally happy! Or so she says. Her friends aren’t exactly convinced, nor do they think this is any kind of substantial career.

Jack’s dad isn’t exactly happy that Jack doesn’t have a real job or salary. As for fresh-faced Rebecca, she comes home to find that she’s been rejected yet again from a record label. It’s the last straw for her, and she calls her friends and asks her to set her up after all. The way all of this plays out, we segue into Jack getting a phone call while on his way out to play poker, with Mrs. Peabody setting him up on his own blind date. And we have no idea if it’s with Rebecca or not, but we’re just meant to assume. The poker game goes from very good (Jack wins a bunch of money!) to very bad (he decides to leave after one hand, even downing his drink to get out of it, but is beat up by some of the men, who also take his winnings).

Back in the present, Jack is drinking at the bar while Rebecca is getting ready. She’s nervous about her gig, so Ben kisses her (ugh). At least Rebecca is rightfully skeeved out. And she realizes Jack was right in his assumption as to why he wanted to join the band. If that’s not bad/heartbreaking enough, Rebecca storms out… right by Jack, who is drinking at the bar. But oh, wait, it gets better. Rebecca, not that far away from her husband, is trying to call the house. “I wish you were here,” she says as we collectively scream “HE IS.”

A drunk Jack decides to try to find Rebecca on his own, which isn’t the brightest idea. Stumbling around backstage, he ends up getting into a nasty fight with Ben, which Rebecca sees. She gives up her gig (and dream) and drives him home, and although they don’t talk throughout most of the ride, we feel every bit of tension in that car. We know that things have been brewing for awhile, and this is the final straw. These two love each other, but it’s going to be bad.

When they get back home, Rebecca finally asks how long Jack’s drinking has been going on, piecing together that it started right when she got a life, AKA went on tour. Jack tries to blame his dad, but Rebecca’s not having it. She thinks she has no life and is angry Jack acted out like this the moment she started doing something for herself. Jack channels his own father and tells Rebecca that her singing career is NOT a career, and that he’s the one supporting this family. I absolutely have to commend Milo Ventimiglia and Mandy Moore for this entire scene, because not only was it heartbreaking, but it was a masterful exchange. From the silent looks to the screaming, you felt every palpable tension in the Pearson house.

Jack sleeps downstairs for the night, and when Rebecca tries to apologize in the morning, she also tells him that they may have been mad but they meant what they said. She suggests he should stay with Miguel for awhile, and my heart breaks. Meanwhile, we see Rebecca and Jack on their blind dates — which actually aren’t with each other like we’ve assumed. Rebecca’s date is a stuffy man named Ethan who is nice, but totally is not for her, and Jack misses his date completely because he’s trying to steal money from a bar during happy hour. But when he goes to do the deed, he’s distracted from his task by someone on stage: Rebecca, singing for the crowd. They lock eyes. The rest? It’s history.

“I can’t go back to who I was before I met you,” Jack tells Rebecca before he leaves her for the time being. He tells Rebecca he had another date the night they met (which she hadn’t known), but then he saw her and he never looked at anyone else. “Our love story, even though it may not feel like it now, is just getting started,” he tells her. I cry.

This Is Us is definitely sneaky. I wasn’t gullible enough to believe we would find out how Jack died in this episode, because showrunner Dan Fogelman has teased that reveal is a long way off. But now we have more pieces to add to the puzzle. We know Kate blames herself for her dad’s death, and we assumed it was because she made him drive drunk to Rebecca’s gig (which wasn’t the case). Is it because she was the person who was the catalyst for Jack and Rebecca’s fight and separation? Was there another point in the future where Kate did something that caused Jack to hurt himself? I hate saying we have to wait until next season to see, but I love how this show handles its storytelling. It reminds me very much of LOST, where the answers you think you’re getting aren’t the ones that you expect — but that doesn’t mean you can’t keep adding layers to your story.

Oh, and just in case you need to know where we’re leaving off until NEXT SEASON (sob), don’t worry, the show didn’t let us down. Kate and Toby are back in LA and moving in together, Kevin is off to LA to take that meeting with Ron Howard (Sophie is totally not happy about this), and Randall decides after looking through some photo albums from his childhood that he wants to adopt a baby.