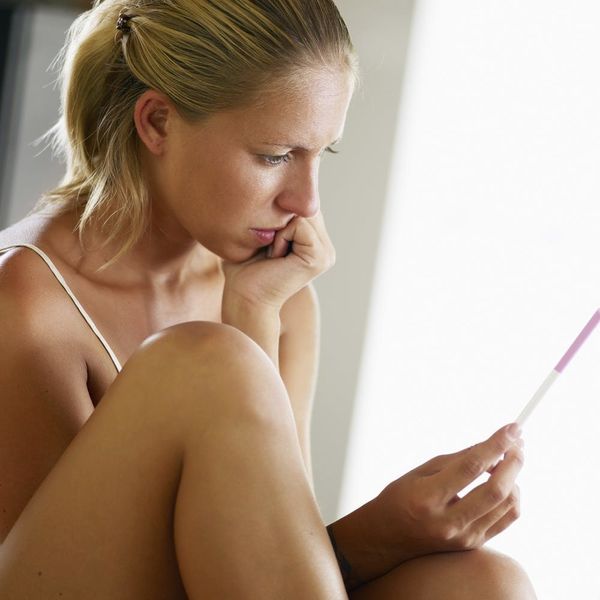 Since its creation, the at-home pregnancy test hasn’t really changed. The plastic stick you pee on goes from the drug store shelf to your home and then the landfill, its one time use making it pretty terrible for the environment. Enter Bethany Edwards and Anna Simpson, who invented the world’s first flushable pregnancy test while in grad school at the University of Pennsylvania. They wanted to create something biodegradable and safe for the environment, and thus Lia was born.

Since hitting the internet in 2015, Edwards and Simpson have waited for the FDA to give their test the green light, which they received earlier this month with a plan to roll out sales in the new year. While the idea of a small, flushable (and inexpensive!) pregnancy test is exciting in and of itself, the inventors also realized that this discreet test can help protect women in abusive relationships.

Reproductive coercion is a phrase that is gaining more understanding in the media. This form of domestic violence involves a partner who either forces their partner to get pregnant or end a pregnancy. Actor Ian Somerholder was accused of it earlier this year when it was found out that he was switching out his wife, Nikki Reed’s birth control in hopes that she would get pregnant even though she said she wasn’t ready. Although the couple later said they were happy and excited for the birth of their first child, who they welcomed in 2017, this is only one example of how reproductive coercion may (hypothetically) work.

During the testing phase for Lia, Edwards and Simpson learned that the flushability of their product was paramount to those hoping to hide their pregnancy tests from someone at home by taking them at work, or elsewhere, something they realized was possibly as important as the ecological impact of the product.

Nancy Neylon, executive director of Ohio Domestic Violence Network, told Tonic that the product could help up to one in four women facing this type of intimate partner abuse in the home, telling the mag, “[Reproductive coercion] is very widespread but something women may not even recognize themselves.”

With Lia becoming available for preorder in the new year, the company suggests placing your order online at a public library using an incognito window (if need be) and promises that they will send your test in discreet packaging as to not raise suspicion about what you are ordering. “We’re working very hard to balance the FDA requirements and maintain discretion,” Edwards told Tonic.

Calling all ladies who have ever peed on a stick: big changes are coming to a toilet near you.

While just finding out if you are pregnant may not help in extreme abuse situations, giving women an option to explore fertility privately is a step in the right direction. Neylon says that she hopes that doctors offices nationwide start to implement more discreet methods of discussing pregnancy with women, including asking if the pregnancy was coerced and to discuss intimate partner violence with women before speaking to partners about pregnancy outcomes.

If you have questions about intimate partner violence, or would like to talk to someone about your home situation, please contact the National Domestic Violence Hotline 1-800-799-7233.

What do you think of a biodegradable pregnancy test? Tell us @BritandCo!

Kat Armstrong
Kat has been a writer, social media maven and mom for longer than she's willing to admit. She's also spent time in front of and behind the camera, interviewing celebs, politicians and acting as a producer for fashion and artistic photography shoots. When she isn't writing for various orgs and publications, she's hanging with her kids, husband and French Bulldog, Peter, in Toronto, Canada.
Pregnancy
Womens Health
Pregnancy Womens Health