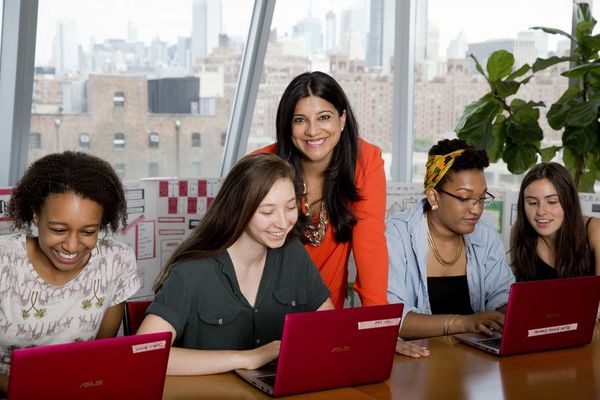 No matter where you turn, more and more folks are talking about how to get women into the science, technology, engineering, and mathematics (STEM) fields. There’s a reason for that: The percentage of women in computer science peaked in 1984 and has been on the decline ever since.

Reshma Saujani, a lawyer with a career in politics, decided she wanted to change that. Saujani launched Girls Who Code in 2012, a national non-profit that aims to close the gender gap in tech by — you guessed it — teaching girls how to code. Along the way, she’s helped spark a global movement.

@reshmasaujani is in DC today for the National Book Festival meeting with future #girlswhocode and talking about our new books! What was your favorite book when you were little? 📚

Girls Who Code recruits girls between the ages of seven and 13 to give them an education in all things STEM. Fewer than half of US schools teach computer programming, which is where Girls Who Code will help fill in the gap to keep interest continued over time and through college — with a focus on girls.

“Culture is the real hurdle that we face,” says Saujani. “The image of a programmer is of a boy in a hoodie in a basement alone, and girls look at that say ‘no, thanks.’ We need to change pop culture and the image of what a programmer looks like and does.”

That cultural prejudice starts early. Saujani has noticed that while tech jobs are among the fastest growing in the country, girls are being left behind from STEM education each and every single day.

“I visited a lot of New York City public schools, where I saw computer labs full of boys learning to code and no girls in sight,” explains Saujani in an email interview with Brit + Co. “That pissed me off, and I wanted to do something about it.”

Rather than complain, she leaped into action and set up a programming boot camp for 20 girls from New York City to learn coding over seven weeks. Now, five years later, Girls Who Code has taught programming to some 40,000 girls in all 50 states — “effectively quadrupling the talent pipeline!” according to Saujani.

It’s not just a talent shift that Saujani aims to set in motion. A number of women who currently work in the tech sector have recently come forward to say they have felt the industry to be sexist and, at times, unsupportive. In our interview, Saujani explains that with Girls Who Code they are trying to really change the entire culture of the tech field inside out by fostering the future of tech looks like.

“We have been partnering with several tech companies so that they can have a hand in shaping that future,” she says. “We’re building a movement of women in STEM, hopefully, enough women to really flood the gates.”

The world has taken note. Uber — a tech organization recently plagued by allegations of company sexism — donated $1.2 million dollars to Girls Who Code, which Saujani explains will build up the future programming across the United States.

“We’re hoping to reach 60,000 more girls over the next three years, including girls in areas that might not have regular access to computers and the internet,” Saujani says.

Looking for your next #fridayreads? Girls Who Code: Learn to Code and Change the World is on shelves now.

In late August, Girls Who Code launched their first publishing program with the release of two new books — an official coding guide, Girls Who Code: Learn to Code and Change the World, and the first book in a new GWC fiction series, The Friendship Code by Stacia Deutsch. Through the release of the publishing program, Saujani hopes that girls across the world will see themselves in these characters and — as a result — see themselves as coders.

“One of the best ways to spark girls’ interest is to share stories of girls who look like them,” she says. “You can’t be what you can’t see.”


Are you a woman working in STEM? How were you inspired to pursue your career? Talk to us @BritandCo.

Amanda Scriver
Amanda Scriver is a passionate storyteller and body image advocate based out of Toronto, Canada. When she isn't writing for various publications, she finds time to Keep Up With The Kardashians while partaking in life's greatest pleasure: the chip buffet. Don't ask her what her favorite restaurant is, it's complicated
Ladies First
Gender Issues
Ladies First
More From Gender Issues