Get ‘Forked Up’ With Food Blog Thug Kitchen’s New Podcast 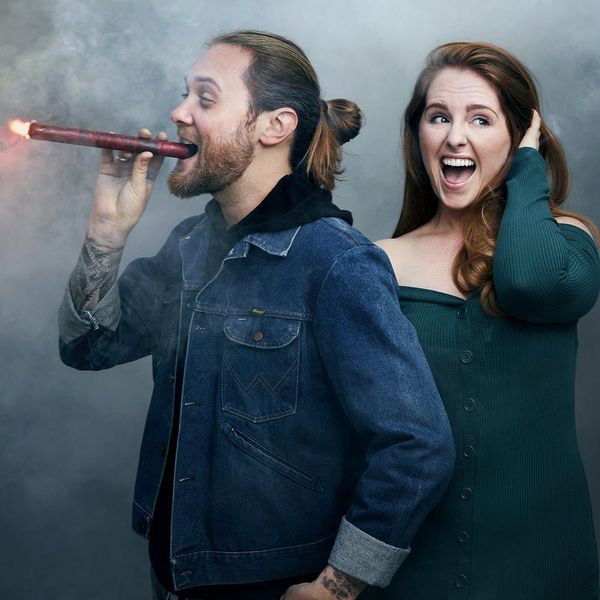 Thug Kitchen, the obscenity-laced vegan cooking series from Michelle Davis and Matt Holloway, has grown from an anonymous food blog to one that amassed a large, dedicated following, three best-selling cookbooks, and a line of merch. Now, the LA-based, straight-talking duo has launched a podcast. Forked Up takes a close look at where food meets culture and politics. With Davis and Holloway’s signature no-nonsense conversation style and guests including Laila Ali and Ron Finley, the podcast takes on food deserts, everyday meal prep, and the economy of cauliflower in relation to rice. Recently we chatted with the pair about their newest venture, which foods they can’t wait to cook with, and how to avoid being “that vegan” at the BBQ. Hint: Don’t even think about bringing fake meat to the gathering.

Brit + Co: What’s been the challenging or surprising part about making a podcast?

Matt Holloway: Our guests, as soon as they get there, they’re like, “Where is the food?” And I’m like “G*d d*mn it; I need to cater this podcast?” [laughs]

Michelle Davis: Yeah they’re literally like, “This is a food podcast. Where is the food?” I hate [how] on food podcasts, when they’re talking all about the food, and they’re eating it, and I can’t see it or taste it. There’s so many other facets to food and food culture. We want to use the podcast for that.

B+C: Why focus on how food interacts with the bigger picture of American culture and politics?

MH: Food is not just a unifying thread through all of our lives but is a cornerstone. You do it three times a day.

MD: When you treat [food] like a world apart, it makes the conversation only for rich people or people who are considered “experts,” and it leaves a lot of regular folks out of the conversation. They have just as much skin in the game as chefs who make f*cking ramen burgers and sh*t — even more so. We need to talk about the food desert stuff, because LA has a beautiful food culture, but it also has an enormous food desert. To talk about one and not talk about the other is putting blinders on.

B+C: A lot of our readers are new to veganism. With summer coming up, do you have any advice for handling BBQs?

MH: I think you should focus on sides. That’s what everyone is there for anyway. That’s the sh*t that people focus on, so bring that.

MD: Don’t roll up with fake meat to a BBQ, because people are going to make fun of you. Bring things that people would be stoked to eat but doesn’t just scream ,”I’m a weirdo who only eats wheat grass.”

B+C: What produce is coming into season in the next few months that you are excited for?

MD: I f*cking love stone fruit. You can’t eat those year-round. But oh man, peaches in the summer — I will eat myself sick.

MH: That real nice, thin asparagus. If you go to the grocery store right now, looking at asparagus, that sh*t looks like a tree trunk. That’s not what people should be cooking.

If you’re on the lookout for warm-weather sides from Thug Kitchen, Davis and Holloway shared their favorites: a spiked ice tea, Mexican-style grilled corn, and tempeh kabobs (see recipe below) from their second cookbook, Thug Kitchen Party Grub: For Social Motherf*ckers. Get grilling!

1. Chimichurri Sauce: Throw all the sauce ingredients together in a food processor or blender and let that f*cker run until it looks kinda like a chunky pesto. If it’s getting a little stuck, add a tablespoon of water to get that sh*t going again.

2. Veggie and Tempeh Kabobs: Place a steamer insert and a couple inches of water in a small pot. Bring to a boil over medium heat. Add the tempeh, cover, and steam until it starts to smell kinda nutty, about 10 minutes.

3. While the tempeh is steaming, mix the broth, soy sauce (or tamari,) liquid smoke, and oil together in a medium bowl.

4. When the tempeh is done, dump it in the bowl with the marinade and mix it together so every piece gets some of that flavor on it. Let it sit, stirring occasionally, while you chop the veggies.

5. Cut the zucchini, onion, and bell pepper into large chunks about the size of the tempeh cubes. Stick them and the tempeh on the skewers alternating ingredients until you fill them all up. You know what the f*ck to do; you’ve seen a f*cking kebab before (Don’t throw the tempeh marinade out.).

6. Bring your grill to a medium-high heat.

7. In a small bowl, mix together 2 tablespoons of that tempeh marinade, the no-salt seasoning, and the paprika. Using a pastry brush or spoon, spread that sh*t all over the kebabs. That’s right, we’re layering the flavors, b*tches. Place the kebabs on the grill and cook for 7 to 9 minutes, turning every couple minutes. You are looking for those bomb-ass grill marks and for the veggies to get golden brown around the edges. If they start looking a little dry before they are done, brush them with a little bit of olive oil or some of the remaining marinade. Take them off the grill and let them cool for a hot minute.

8. To serve, you can either pour the chimichurri sauce over the kebabs or serve it on the side so people can dip how they want. Up to you. Or forget other people and just make these for yourself. B.Y.O.K.

Have you tried any Thug Kitchen recipes? Show us on Instagram!

(Photos and recipe via Thug Kitchen)