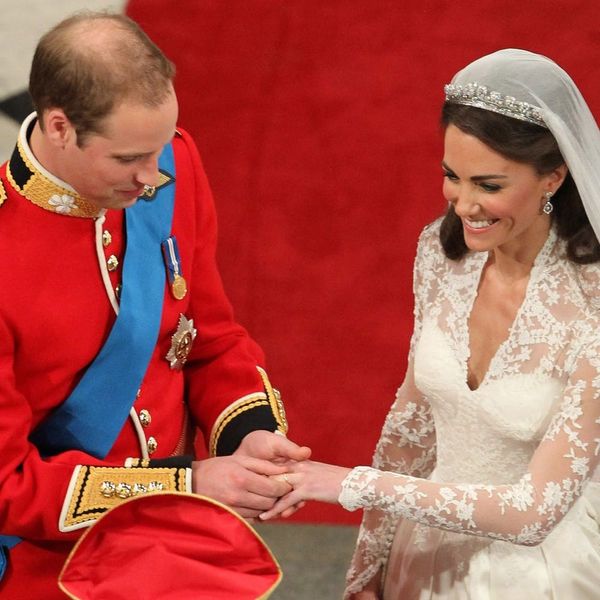 With just hours to go before the wedding of Prince Harry and Meghan Markle, royal watchers around the world are eagerly anticipating the fairy-tale nuptials across the pond and making their final predictions about what we’ll see on the big day. Some royal wedding etiquette is a given, but we suspect there will be a few nontraditional elements, too.

For comparison’s sake, the royal family shared some of their most memorable wedding traditions from past ceremonies. Check them out below, and stay tuned to our royal wedding coverage on Saturday, May 19, to see which (if any) make it into Harry and Meghan’s wedding.

Rings of Welsh Gold: Queen Elizabeth II’s ring — like her mother’s, her sister’s, her daughter Anne’s, and even Princess Diana’s — came from a single nugget of gold mined in Clogau St. David’s at Bontddu, Wales. According to the royal family’s website, there’s a “sliver” of the original nugget remaining, but it’s being preserved by the Privy Purse Office. Welsh gold is still the Crown Jewelers’ metal of choice for royal wedding rings, though: Duchess Kate’s band was made from a second piece gifted to the royals for future rings.

A Sprig of Myrtle: Another time-honored tradition is the inclusion of a sprig of myrtle in the bridal bouquet, which can be traced back to the wedding of Princess Victoria, the eldest daughter of Queen Victoria and Prince Albert. Queen Victoria’s original myrtle plants, descended from a posey given to her by Albert’s grandmother, still exist at her former vacation home, Osborne House.

A Tribute to Fallen Soldiers: What happens to royal bouquets? At the wedding of Lady Elizabeth Bowes-Lyon to future King George VI in 1923, the Queen Mother laid her wedding bouquet at the tomb of the unknown soldier, a gesture meant to honor her brother, who’d passed away during the First World War. Since that touching tribute, royal brides — including Duchess Kate in 2011 — have left their bouquets at the tomb at the end of their wedding ceremony.

Orange Blossoms: At her wedding in 1840, Queen Victoria wore a halo of orange blossom flowers instead of a tiara. Since then, several other royal brides have incorporated orange blossoms into their wedding looks. Queen Elizabeth II’s wedding dress, for example, which she paid for using clothing ration coupons, featured orange blossoms around the hem. And Duchess Kate put her own spin on the custom in 2011 by filling the air at Westminster Abbey with her favorite scent: Jo Malone’s Orange Blossom candles and room deodorizers.

Does your family have any wedding traditions that have been passed down? Let us know @BritandCo!