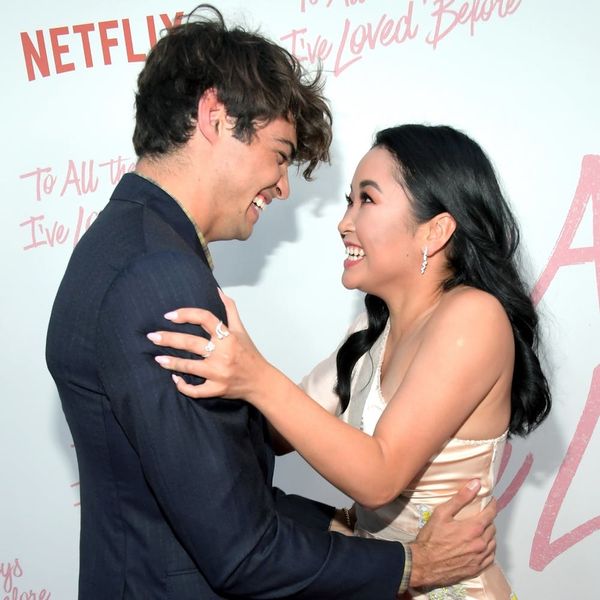 If you’ve watched To All the Boys I’ve Loved Before, you’ve probably fallen in love with the internet’s new boyfriend, Noah Centineo. As Peter Kavinsky, Centineo charmed both audiences and star Lana Condor, AKA Lara Jean Covey. But can he win her over without a script? Netflix decided to find out by having Centineo face off against Israel Broussard (Josh) in a “charm battle,” where Condor could award points to each guy for their best/cheesiest pickup lines.

Centineo was up first. “Hey, can I take your picture? So that Santa knows what I want for Christmas,” he purred to Condor, who responded by giving him 100 points.

He also earned points for this gem: “Do I know you? You look a lot like my next girlfriend.” And this one got him a whopping 250 points: “I totally just lost my phone number. Can I have yours?”

But Broussard, who played Josh in the film, had a few tricks up his sleeve, too. His first attempt was a little rough, though: “Kiss me if I’m wrong, but dinosaurs still exist, right?” he quipped to Condor, who gave him zero points for the line.

He got himself on the board with his second try: “Is your name WiFi? Because I’m really feeling a connection.” Despite the arguably weak signal (ha), Condor offered Broussard 200 points for his effort. He took 100, but pulled ahead by earning 500 (!) for this line: “Hey, tie your shoes. I don’t want you falling for anybody else.”

Condor’s point system got a little wild from there, ranging from five points all the way up to 600, but in the end, well, we’ll let you see who wins for yourself.

Who do you think won the charm battle? Tell us @BritandCo!

Desiree O
Desirée O is a ‘Professional Bohemian’ who loves anything and everything related to the arts, entertainment, and pop culture. She ADORES being a ‘Newsy’ for Brit + Co, covering all of the latest tidbits of awesomeness that you want to read about. When she’s not writing, she’s either making messy art, going on long adventurous walks with her camera, or poking around over at bohemianizm (http://www.bohemianizm.com/). You can find out about Desirée O and her work at http://DesireeO.com/ or follow her on Twitter @DesireeO.
Movies
Pop Culture
Movies Netflix
More From Pop Culture