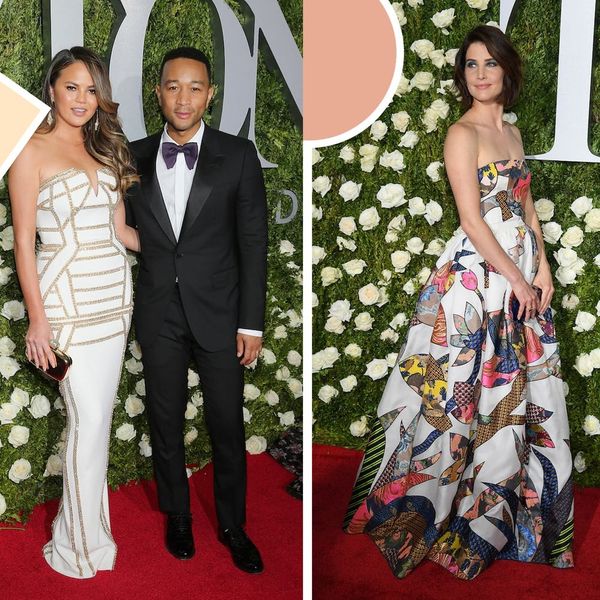 With stars including Chrissy Teigen, Olivia Wilde, and Scarlett Johansson walking the carpet, the 2017 Tony Awards was bound to serve up some serious style. Check out all the night’s can't-miss fashion winners!
Chrissy Teigen and John Legend: Legend may have been one of the night’s biggest winners, but wife Teigen was no slouch herself in this geometric white and gold Pamella Roland column frock. (Photo via Jemel Countess/Getty)
Scarlett Johansson: Leave it to ScarJo to take a trend (menswear) and make it her own. The Rough Night actress wore a pinstripe suit dress by Michael Kors Collection with an Elsie clutch from his MICHAEL Michael Kors diffusion line. (Photo via Dimitrios Kambouris/Getty)

Candice Swanepoel: That's one hot mama! The Victoria's Secret model, who gave birth to baby Anãca back in October, showed off her enviable figure in a sequined and sheer Prabal Gurung frock. (Photo via Dimitrios Kambouris/Getty)

Olivia Wilde: The 1984 actress was on the same page as Johansson with regard to designers, choosing a bold red Michael Kors collection plunging V-neck gown to walk the carpet. (Photo via Jemal Countess/Getty)
Sarah Paulson: Paulson stood out in a white Rodarte column gown with an intricate embellished overlay, Irene Neuwirth earrings, and a little red clutch for a pop of color. (Photo via Dimitrios Kambouris/Getty)
Laura Linney: The Little Foxes star was a breath of fresh air in a colorful orange and yellow Derek Lam dress with its bold orange waist belt. (Photo via Jemal Countess/Getty)
Cynthia Nixon: The Little Foxes showed off her softer side in a pale pink Rosie Assoulin dress with a matching bubblegum pink clutch. (Photo via Dimitrios Kambouris/Getty)

Taye Diggs + Amanza Smith Brown: Typically, it’s Diggs that’s getting all the attention, but last night, we couldn’t take our eyes off of his girlfriend in a stunning beaded and flower Jovani gown with its plunging neckline. (Photo via Dimitrios Kambouris/Getty)
Rachel Bay Jones: The Best Actress in a musical winner for Dear Evan Hansen stunned in a turquoise blue strapless hoop skirt Christian Siriano ballgown. (Photo via Dimitrios Kambouris/Getty)
Cobie Smulders: One of our favorite looks of the evening came courtesy of the How I Met Your Mother alum and Present Laughter star, who was as high fashion as they come in this strapless patterned Schiaparelli number. (Photo via Dimitrios Kambouris/Getty)
Anna Kendrick: Kendrick joked on Instagram that her Miu Miu dress “blended in" with the Tonys backdrop.
Bee Shaffer and Anna Wintou: The ever fashionable mother/daughter duo brought some intrigue to the carpet, with Shaffer in a patchwork Alexander McQueen creation and Wintour in her famed sunglasses and a Maison Margiela butterfly Artisanal dress. (Photo via Dimitrios Kambouris/Getty)
Sara Bareilles: One of the most daring looks of the evening came from Bareilles, who wrote the music and lyrics for Waitress, in a silver sheer Naeem Khan dress, Casadei heels, an Edie Parker clutch, and H. Stern jewelry. (Photo via Bryan Bedder/Getty)
Laura Osnes: The Bandstand star stunned in this gorgeous Badgley Mischka masterpiece. She made her look complete with the jewelry brand of the eve, Fred Leighton. (Photo via Dimitrios Kambouris/Getty)
Uma Thurman: The Kill Bill star went for gothic chic in a simple black dress, keeping the focus on that cross Fred Leighton necklace. (Photo via Jemel Countess/Getty)
Liu Wen and Zac Posen: Walking the red carpet with the designer, Wen outdid herself in an enchanting off-the-shoulder Posen creation with Tiffany & Co. jewels to boot. (Photo via Jemal Countess/Getty)

Which look is your fave? Let us know over @BritandCo.

Which look is your fave? Let us know over @BritandCo.

Nicole Briese
Nicole is the weekend editor for Brit + Co who loves bringing you all the latest buzz. When she's not busy typing away into the wee hours, you can usually find her canoodling with her fur babies, rooting around in a bookstore, or rocking out at a concert of some sort (Guns N' Roses forever!). Check out all her latest musings and past work at nicolebjean.com.
Tony Awards
Celeb Style
Tony Awards