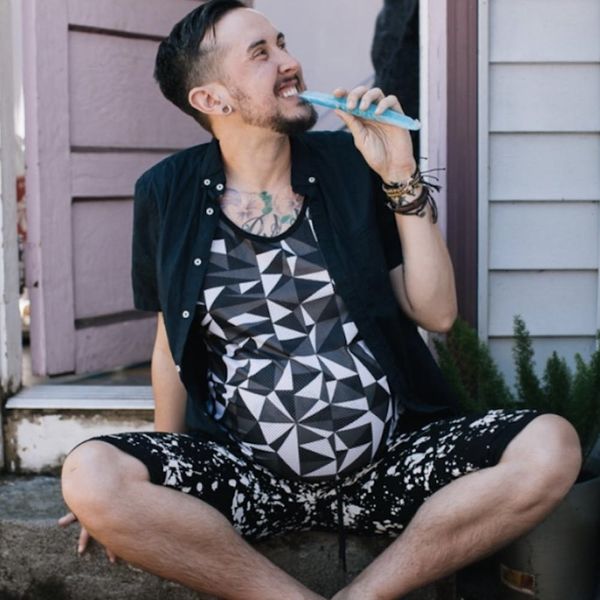 Transgender dad Trystan Reese is making headlines for being a man and being eight months pregnant.

Reese isn’t becoming a father for the first time; he already has two adopted children with partner Biff Chaplow. But he’s making his first pregnancy public in order to help change the way we view trans men, and pregnancy in general.

“In some ways, I have detached the process of birth from womanhood,” said Reese in an interview with Vice. “I’m already doing something that’s outside of the norm of what men and women are supposed to do, so for me I don’t feel it’s that rigid that men are not supposed to have babies.”

Getting pregnant is a relatively straightforward process for trans men, though it can be expensive. Reese simply stopped taking his hormones and was able to get pregnant without any other interventions. Two recent studies suggest that the psychological effect is more challenging.

The study sample sizes were small, but a theme emerged: The birth parents felt isolated and had complicated feelings about their gender identity. “…Pregnancy can lead men to acknowledge that they still have female reproductive organs, which for many can be difficult, however rewarding the pregnancy may ultimately be,” wrote Dr. Juno Obedin-Maliver and Dr. Harvey Makadon, authors of a 2015 paper on trans pregnancy.

But Reese has a different take on this idea.

“The message has been the thing that makes us transgender is we hate our bodies and we want to do everything to change our bodies,” he told Vice. “That’s the experience of a lot of transgender people; it’s not mine. For some of us, we think it’s okay to embrace and accept the unique path we have.”

Whether society is ready to accept trans pregnancy is another thing. Caitlyn Jenner and Laverne Cox have brought acceptance to the idea that a woman can be born into a man’s body. But accepting that that man might still want to take part in the traditionally feminine practice of pregnancy might take more time.

You're NEVER too pregnant to read My Little Pony to your 6yo...

Until then, Reese is relieved that the trans and LGBTQ+ community has his back — something he was hoping for, but not necessarily expecting. While he thought other trans men would say he was confusing people and making it more difficult to be accepted as men, the opposite’s been true.

How much do you love Trystan and Biff as parents? Tell us @BritandCo!

Bronwyn Kienapple
Bronwyn Kienapple is a Toronto writer who recently spent four years living in Mexico City and traveling in Southeast Asia. She's a former publishing professional who quit her full-time job to travel and write. When she's not penning cozy cat mysteries for Amazon or ghostwriting romance and YA, she's hoarding foster cats, eating all the vegan food, and planning trips near and far.
Family
Gender Issues
Family LGBTQ Pregnancy