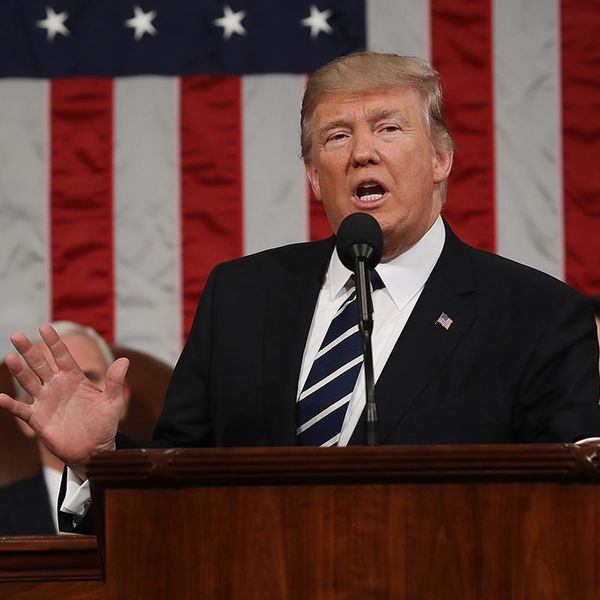 Last night, the world saw a rare version of President Donald Trump. As he walked up to the podium to give his first speech to Congress, Trump refrained from the sensational rhetoric he’s become famous for. Instead, he gave a speech that was noticeably smoother, scripted, and more informational than usual.

But make no mistake, despite the absence of adjectives like “very” and “huge,” Trump boasted about the same issues and reforms he’s been preaching since Inauguration Day. The repeal of Obamacare, rigorous immigrant vetting, and the importance of putting “America first” were all on the night’s agenda.

If you missed the hour-long speech when it aired, here’s a breakdown of Trump’s key talking points and what they mean:

A MESSAGE OF UNITY

WHAT HE SAID: “Recent threats targeting Jewish Community Centers and vandalism of Jewish cemeteries, as well as last week’s shooting in Kansas City, remind us that while we may be a nation divided on policies, we are a country that stands united in condemning hate and evil in all its forms.”

WHAT THAT MEANS: Many of Trump’s critics shared the idea that Trump’s policies have led to an increase in racist and religious incidents across the country. As he mentioned in the quote above, about 100 tombstones were overturned at Jewish cemetery Mt. Carmel Cemetery in Philadelphia last week. The week prior, about a dozen headstones were damaged at a Catholic cemetery in the same area. While he definitely did not accept the fault for these sorts of actions, he did publicly condemn them and even went so far as to call the country “a nation divided on policies.”

Unity was a major theme of Trump’s speech last night; he even made a direct quote acknowledging this. “I am here tonight to deliver a message of unity and strength, and it is a message deeply delivered from my heart,” he said. And while publicly stating that he does not support discriminatory behavior is a step in the right direction, there are still disparities between this notion and the idea that it’s constitutional to omit immigrants from seven predominantly Muslim countries.

WHAT HE SAID: “Switching away from this current system of lower-skilled immigration, and instead adopting a merit-based system, will have many benefits: It will save countless dollars, raise workers’ wages, and help struggling families — including immigrant families — enter the middle class.”

WHAT THAT MEANS: Naturally, immigration was part of last night’s address. But this notion of a merit-based system is new. Trump said, “Nations around the world, like Canada, Australia, and many others, have a merit-based immigration system. It is a basic principle that those seeking to enter a country ought to be able to support themselves financially. Yet, in America, we do not enforce this rule, straining the very public resources that our poorest citizens rely upon. According to the National Academy of Sciences, our current immigration system costs America’s taxpayers many billions of dollars a year.”

Merit-based immigration is a phrase that Washington is familiar with, but the public might not be. Essentially, the idea is that this type of system would favor educated, highly skilled workers as opposed to family-based immigration, which allows US citizens and permanent residents to bring certain family members into the country with them.

COMMENTS ON THE OBAMACARE REFORM

WHAT HE SAID: “I am also calling on this Congress to repeal and replace Obamacare with reforms that expand choice, increase access, lower costs, and at the same time, provide better healthcare.”

WHAT HE MEANS: Despite opening by telling the room, “I am here tonight to deliver a message of unity and strength,” President Trump devoted a significant portion of his time at the podium to the pitfalls of Obamacare, a system many Democrats worked hard for and stand by. At one point, a few Democrats even gave him a thumbs down for his comments (pictured above). If he was trying to unite the two sides of Congress, this was probably not the most effective approach he could have taken.

However, in a new move last night, Trump didn’t just criticize the system but he actually offered insight as to what the reform would entail — something he has not been clear about in the past. He told Congress, “First, we should ensure that Americans with pre-existing conditions have access to coverage and that we have a stable transition for Americans currently enrolled in the healthcare exchanges.” He explained the government should help Americans purchase their own coverage through tax credits and expanded Health Savings Accounts and also mentioned that the reforms must “protect patients and doctors from unnecessary costs that drive up the price of insurance and work to bring down the artificially high price of drugs and bring them down immediately.”

A SHOUT-OUT TO THE GALLERY

WHAT HE SAID: “We are blessed to be joined tonight by Carryn Owens, the widow of a US Navy Special Operator, Senior Chief William “Ryan” Owens. Ryan died as he lived: a warrior, and a hero battling against terrorism and securing our Nation.”

WHAT THAT MEANS: Toward the end of his speech, Trump shifted from notes about policy to talk a little bit about some of the people in the audience. He gave a shout-out to rare disease survivor Megan Crowley and Denisha Merriweather, a poster child for the tax credit school options Betsy DeVos famously backs. He also told the stories of Jamiel Shaw, Susan Oliver, Jenna Oliver, and Jessica Davis, who all have had family members killed by undocumented immigrants.

Most notably, though, he called out Carryn Owens, the wife of Ryan Owens who died during a Yemen raid Trump authorized on January 29. There has been some controversy about this raid, as it was considered risky and resulted in the deaths of at least 23 civilians, as well as the loss of Owens. Three other Navy Seals were also injured. Trump told Carryn and the audience, “Ryan laid down his life for his friends, for his country, and for our freedom — we will never forget him.”

Through these mentions, Trump likely wanted to further drive home the notion that got him elected in the first place — that he is a president who isn’t afraid to acknowledge and elevate the plight of the average American. It just so happens that all the Americans he brought along can perhaps also help humanize some of his more controversial decisions (like the nomination of DeVos, immigrant crackdown, and his authorization of the Yemen raid).