Trump’s Travel Ban Is Allowed to Go into Full Effect 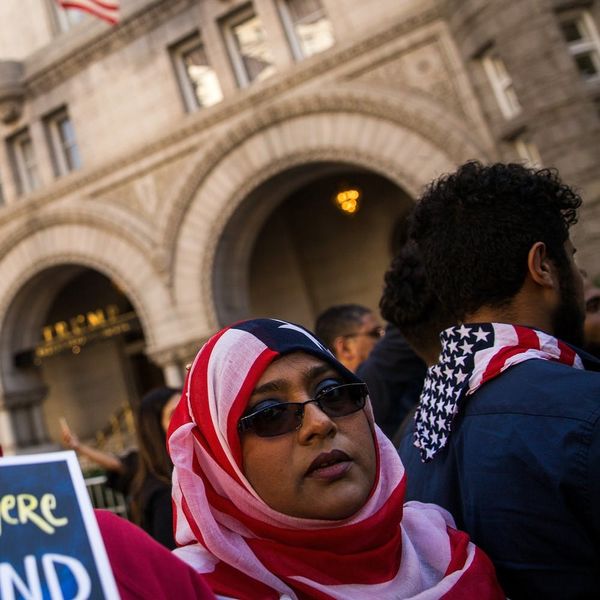 On Monday, the Supreme Court ruled to allow the third version of Trump Administration’s controversial travel ban to go into full effect, pending appeal. This is the first time that the Supreme Court has, for all intents and purposes, allowed the ban to proceed.

If the many iterations, appeals, and cycles of blowback surrounding what many refer to as the “Muslim Ban” have your head spinning, here’s a little rundown on how things have played out so far.

Back in January 2017, Trump’s first version of the order attempted to ban nationals of Iran, Iraq, Syria, Yemen, Somalia, Sudan and Libya from entering the US for 90 days. The slap-dash order also banned all refugee settlement for 120 days and Syrian refugees indefinitely. It quickly drew intense criticism and the moniker “Muslim Ban,” and prompted protests at airports nationwide and lower court challenges across the country. It was eventually blocked by federal courts.

A second version of the order, proposed in March, removed Iraq from the list and lifted the provision regarding Syrian refugees. In June, the Supreme Court allowed the policy to take effect with an important exception: that individuals from affected countries with provable ties to the United States would not be affected. Trump was not a fan of the revision, calling it “watered down” and “politically correct,” reports the BBC.

Trump issued his third version of the order in September, adding non-Muslim majority countries North Korea and Venezuela to the list, and naming Chad, Iran, Libya, Somalia, Syria, and Yemen as nations whose citizens would be banned from entering the United States. Sudan was removed from the list.

Yesterday, the Supreme Court approved a request by Trump’s lawyers to lift restrictions on the September version of the ban that had been imposed by the lower courts. The restrictions have been lifted until the US Court of Appeals in Richmond, Virginia and San Francisco hear the cases, which should happen this week. The Supreme Court wants those courts to reach decisions quickly.

What it means: The Trump administration is now free to enforce this most recent version of the travel ban while legal challenges continue.

Who it affects: Nationals from six Muslim-majority countries – Chad, Iran, Libya, Somalia, Syria, and Yemen – are banned from entering the US. Travellers from North Korea and some officials from Venezuela have also been banned.

What people are saying: “We are not surprised by today’s Supreme Court decision permitting immediate enforcement of the President’s proclamation limiting travel from countries presenting heightened risks of terrorism,” CNN reports White House spokesman Hogan Gidley said. “The proclamation is lawful and essential to protecting our homeland. We look forward to presenting a fuller defense of the proclamation as the pending cases work their way through the courts.”

“President Trump’s anti-Muslim prejudice is no secret – he has repeatedly confirmed it, including just last week on Twitter,” the BBC reports ACLU lawyer Omar Jadwat said. “It’s unfortunate that the full ban can move forward for now, but this order does not address the merits of our claims.”

Lia Grainger
Lia Grainger is a freelance journalist and reluctant nomad who divides her time between Canada and Spain, weather dependent. She's written for The Atlantic, Reader's Digest, the Toronto Star and other print and online publications, and her work appears in dozens of languages around the world.
Immigration
Politics
Immigration
More From Politics