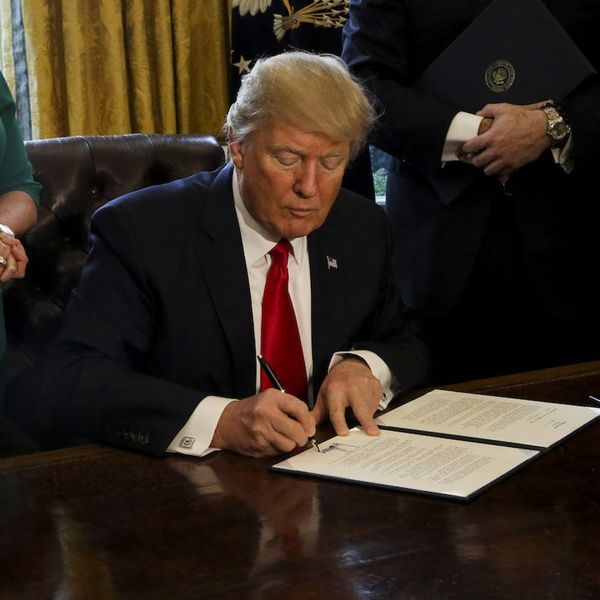 Nearly a month after the Ninth Circuit Court of Appeals refused to reinstate President Trump’s controversial travel ban, Trump has signed a revised version of the executive order. This new iteration of the ban now excludes Iraq from the list of banned countries and includes clauses that allow legal permanent residents, diplomats, those who’ve been granted asylum and refugee status, and people with dual citizenship entry to the US. Scroll on down for more deets about the revisions.

According to The Washington Post, the revised EO was signed by Trump in private on Monday and is set to go into effect on March 16. It’s worth noting that the administration’s pre-emptive release of the order’s contents is somewhat contradictory to Trump’s approach the first time around. When addressing controversy over the suddenness of the initial ban he tweeted, “If the ban were announced with a one week notice, the ‘bad’ would rush into our country during that week. A lot of bad ‘dudes’ out there!”

The new ban still temporarily prohibits non-US citizens from Syria, Iran, Sudan, Libya, Yemen, and Somalia from obtaining visas for 90 days. But unlike last time, Iraq has been excluded from the roster of restricted countries. A spokesperson from the Department of Homeland Security told The Post, “Iraq was ‘treated differently’ in part because the country had agreed to ‘timely repatriation’ of their citizens if they were ordered deported from the United States.”

In response to some initial backlash and chaos the original EO created, the order now allows US entry by green card holders, citizens with dual citizenship, and people who have already been granted refugee status. Where it comes to new refugee claimants, though, not much has changed. The country’s refu­gee program will still be suspended for 120 days and will not accept more than 50,000 refugees in a year — a 55 percent decrease from the 110,000 cap set by the Obama administration. However, the indefinite ban on refugees from Syria that was introduced in the first order has been absorbed into the general 120-day ban.

Part of the reason the Ninth Circuit Court of Appeals refused to reinstate the ban last month was due to lack of evidence that the actions of immigrants and refugees from these countries actually warranted this ban. In this new revision, officials attempted to establish more justification for the order by claiming “300 people who entered the country as refugees were the subject of counterterrorism investigations.” But according to The Post, officials will not specify which countries these people came from or what their immigration status is.

Despite clearing up some of what made the initial ban so controversial, these revisions aren’t likely to win the support of immigration rights advocates. Omar Jadwat, the director of the Immigrants’ Rights Project at the ACLU (the organization that initially took Trump’s ban to court), issued a statement about the revised EO. That statement says, “The Trump administration has conceded that its original Muslim ban was indefensible. Unfortunately, it has replaced it with a scaled-back version that shares the same fatal flaws. The only way to actually fix the Muslim ban is not to have a Muslim ban. Instead, President Trump has recommitted himself to religious discrimination, and he can expect continued disapproval from both the courts and the people.”

We’ll keep you updated as this story develops.

What is your take on these revisions to the travel ban? Share with us on Twitter @BritandCo.