Chime In: Does Robotic Art Count As Real Art? 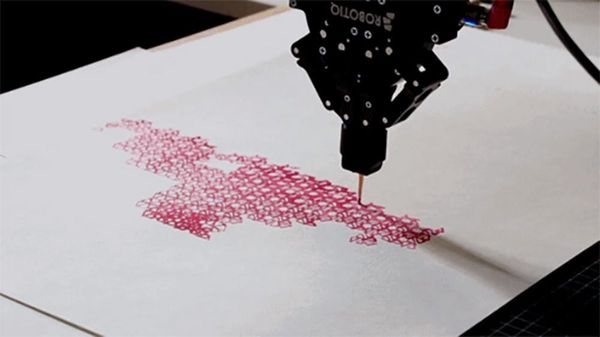 Robots making art — this is becoming a common everyday occurrence. We already told you about Autonomous Machines, where obsolete objects like wind-up clocks and Walkmans are made into little art factories. Oh, and then there was the Egg-Bot taking care of business in the blinged-out-Easter-egg department. And now someone who goes by the name of Dr. Woohoo! (as he puts it, “It’s more mysterious that way.”) has orchestrated geometric watercolor paintings, created by a robotic arm. He’s calling the project Turbulence and the results are one pretty impressive live art performance.

Unlike the wind-up clock and Walkman, this mechanical arm, a robot created by Autodesk Labs, is actually super high tech. The Doc created his own application to make the designs and then did some other super technical stuff that he’s willing to share with you if you’re interested in going down the same road. For the more arty stuff, he was inspired by a combo of Kandinsky’s works and New Mexican ceramic designs.

As for the colors, the designer behind the project is a piece of software called Perlin Noise, which has been used in the movie-making biz since 1997 and even garnered its creator, Ken Perlin, an Oscar (ain’t no big thang). Perlin Noise gives colors and patterns a more natural look and feel. If you’re interested in taking a look at this open source wonder, you can get it here.

The big Woohoo! himself (he’s really starting to feel a lot like The Great and Powerful Oz) is on a mission to explore “the relationship between artist and robot.” And just how is he doing that? In this case, it’s through a series of three-sided polygons, and we gotta say, the end results are pretty easy on the eyes.

And being the strange, mysterious and, we’ve officially decided, cool character that he is, Dr. Woohoo! made one bad ass music video to let you see just how nerdy cool this all actually is. Put on those headphones. You’re gonna wanna hear the track.

Will you be buying any robot-painted art? Does it qualify as real “art? Sketch your thoughts in the comments below.

Lex Monson
Alexis is the co-founder of Punkpost, the app that lets you send handwritten cards (yes, handwritten by a real human) in the amount of time it takes you to send a text message. The exclusive card collections are created by a community of artists and designers and hand letter pressed on high-quality cotton paper. Get the full experience by downloading the app from the iTunes Store.
Art
Tech
Art