Vanessa Grimaldi’s Engagement Ring Was Recycled from a Previous Bachelorette 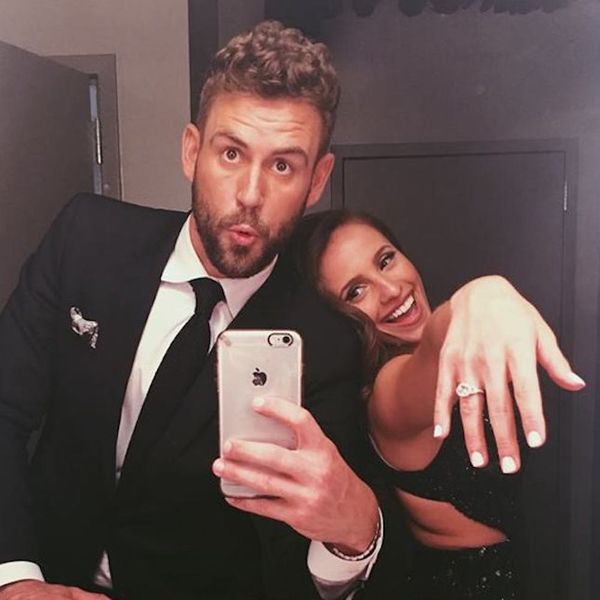 When it comes to getting married, “The One” can refer to more just than your significant other. The term is also one that can be used describe the symbol that seals the deal: the engagement ring. Every bride wants her ring to be unique (a big reason many even get them custom-made), yet, in most cases, she’s usually not the one picking it out, being forced to trust that her partner knows her well enough to know her personal tastes and style.

Needless to say, when it comes to The Bachelor, that can likely get a litttttle tricky, considering, as Vanessa Grimaldi recently told People, “We’re still in the process of getting to know each other outside Bachelor world.” Still, if social media is any indicator, Viall seemed to do just fine by Grimaldi, with the newly engaged 29-year-old flashing her new bling at every given opportunity and dubbing it, “Big, like my personality.”

He swept me off my feet...literally! Love, love, love you! @nickviall 🎉❤️

The Neil Lane 3.75 carat rock is beautiful, to be sure, with its round-cut center diamond, baguette-cut side diamonds, and 164 surrounding diamonds, it’s easy to see why Viall chose it. “I just closed my eyes and envisioned her beautiful face,” he told People of his pick. “I knew immediately which one was perfect for her.”

Holy shit she said yes!! ❤️❤️❤️❤️. It's been a journey Bachelor Nation!! @vanessagrimaldi30 I love you!! #thebachelor

As Claudia Oshry pointed out on Instagram, it was apparently “perfect” for someone else too, having already been picked out for another Bachelor nation bride: Bachelorette JoJo Fletcher. The ring appeared to be one and the same as the stunner Robby Hayes chose to propose with, should she have picked him.

#bachelornation WE DESERVE TO KNOW THE TRUTH! Neil Lane, wtf is going on? #thebachelor

Oshry’s suspicions turned out to be right on the money, as People exclusively confirmed Grimaldi’s new sparkler was one and the same as Hayes’ pick for Fletcher. But… how?

As Neil Lane himself explained to the mag, “I bring six rings, and over the years, over the nine years, some are the same, some have changed settings or are re-designed, and some are totally new.” He doesn’t think the news should get Grimaldi down, however, or make her see the ring in a different light.

“The most important thing is for a ring to speak to the particular man and to the woman he is in love with,” he said. “If a ring doesn’t speak to one person, then it wasn’t meant to be. If that particular ring wasn’t meant to find a home with JoJo, but rather spoke to Nick and Vanessa, then that’s the way it should be. It’s found its home.”

What do you make of Nick and Vanessa’s ring snafu? Tell us over @BritandCo.

(h/t Cosmopolitan, photo via The Bachelor/ABC)

Nicole Briese
Nicole is the weekend editor for Brit + Co who loves bringing you all the latest buzz. When she's not busy typing away into the wee hours, you can usually find her canoodling with her fur babies, rooting around in a bookstore, or rocking out at a concert of some sort (Guns N' Roses forever!). Check out all her latest musings and past work at nicolebjean.com.
Celebrity Couples
Celebrity News
Celebrity Couples Engagement Rings love the bachelor