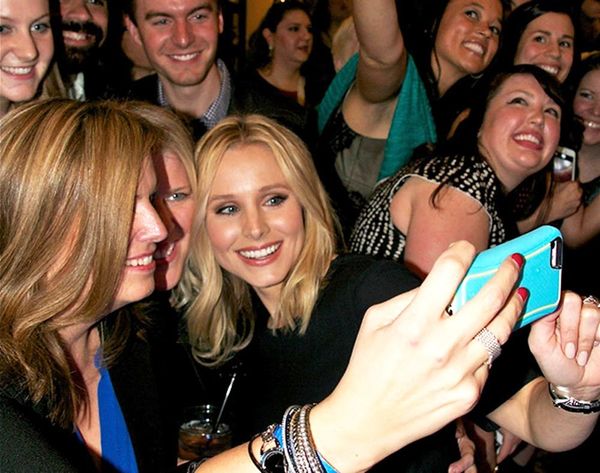 Remember life before Kickstarter? Yeah, us neither… or maybe we just don’t want to since the crowdfunding site is kicking major butt these days. They recently hit $1 billion in pledges and got to celebrate with a milestone that shows a serious change for movie making in the Internet age. Less than a year after the Veronica Mars movie raised $1.3 million in six hours on Kickstarter, it premiered this weekend at SXSW. Adoring “marshmallows” got to skip past Will Call to cash in on their pledges and, if they were lucky, rub elbows with the cast. Squee!

We love to introduce you to cool Kickstarter campaigns we come across and subsequently become obsessed with, but thought it was time to talk life after the pledge. Here are some goodies you would score today if you could travel back in time and donate to Kristen Bell and the gang yesterday:

1. Movie Lines: Sure this comes with the biggest pricetag ($10,000 actually) but it snagged Steven Dengler a line in the movie, serious bragging rights, awesome photos (like the one above!) and priceless memories with Kristen Bell on set and off.

2. Starring(ish) Roles: Not everyone could pledge for a line, but others high bidders got to be extras. Extra special when the New York Times profiles you too.

3. Red Carpet Access: Hundreds scored tickets to the red carpet and after parties for the movie’s premieres at SXSW and in LA and NYC. The lucky ones even nabbed VIP selfies.

4. VM QT: Serious marshmallows who wanted to make their incoming callers jealous could have pledged in exchange for personalized voicemail messages. We’re wondering if we could have gotten Chris Lowell to record: “At the tone, leave Lisa a message. She can’t come to the phone right not because we’re eloping” and also how many times he did a variation on that.

5. Twitter Cred: People drop dough on promoted Tweets, but you could have coughed up a mere $400 to have @IMKristenBell follow you on Twitter for a year.

If you’re sad you missed out on funding this flick and want to get your Hollywood producer-at-home on, here are a few films you can fund or see soon!

1. The World Before Her: The award-winning doc shares the juxtaposing stories of young women competing in the Miss India Pageant and those taking part in a fundamentalist Hindu camp for girls. The creators want it to be seen around the world, specifically in India — and you can help.

2. I Believe in Unicorns: A hit after its SXSW premiere, this flick combines young love and unicorns. Sold!

3. Being George Clooney: A documentary about dubbing Hollywood films for foreign markets with George Clooney’s hunky voice sounds completely addictive to us.

4. Prelude to Axanar: Already in the throes of “stretch goals,” this flick is one for the diehard Trekkies among us. Thanks to fans, this short film will lead in to a “chapter in Star Trek lore.”

5. Obvious Child: This flick has been funded but we had to add it to the list because we’re dying to see it. It stars the incredible Jenny Slate who you might know as Marcel the Shell With Shoes On or from small-but-hilarious roles like as Jean Ralphio’s sister on Parks and Recreation. Follow her on Twitter now and let’s all crash her screening party when it happens, deal?

Have you ever funded a Kickstarter campaign? What inspired you? Share below!

Lisa Raphael
In her past professional lives, Lisa has served the masses as the Editorial Director at Brit + Co, Bieber Whisperer at J-14, Golden Girls Fan Club Prez at Lifetime and Talk Show Host Understudy to Katie Couric. Now, she's taking on the sports world at The Relish, teaching Hairography 101 in her spare time and will forever be trying to fill the hole Zayn Malik left in her heart.
Kickstarter
Tech
Kickstarter
More From Tech