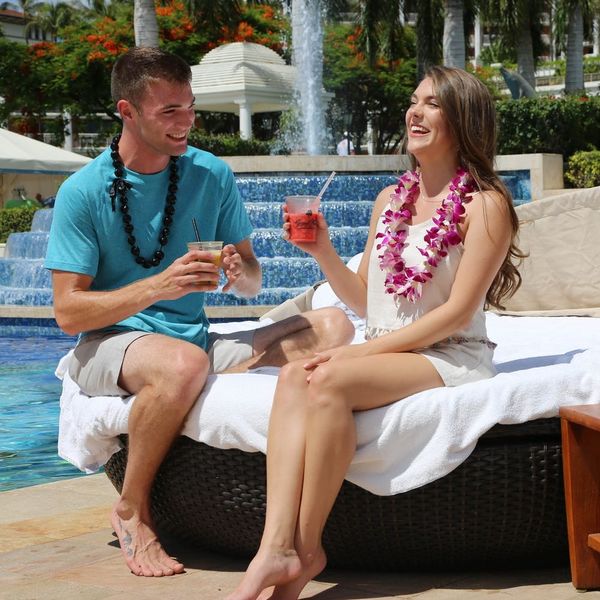 The Tinder couple who met after their three-year flirtation went viralfinally embarked on their first date in Maui! Josh Avsec and Michelle Arendas allowed Good Morning America — who arranged the potential couple’s first official meeting on live TV — to join them on their getaway, filming from departure to return. Today, GMA reported back on whether we can consider this another success story, or if the duo will be looking to the online dating app for other matches.

Basically, if we asked a Magic 8 Ball whether Avsec and Arendas will end up together, it would probably say, “Time will tell.” The two Kent State students seemed a little unsure about whether there would be a second date, although it had to be weird being followed by cameras for the entirety of their first.

Their Maui weekend started with Avsec and Arendas getting lei’d at the Grand Wailea. They headed to the Lucky Mermaid fountain to cast a wish, then went on an adorable bike ride before retiring poolside for some colorful cocktails.

Breaking down the experience on camera, both kept their cards close to the vest. Arendas said she learned about Avsec’s “incredible energy,” describing him as “always excited and always energetic.” Meanwhile, Avsec admired his date’s “determination and perseverance,” which he called “really rare and awesome to be a part of.”

There was no on-camera PDA during the clip (unless you count side-hugging), and no concrete plans to meet up back at school, although Arendas was sure their “paths will cross” when they return to campus and Avsec said the two are “gonna wanna meet up again.”

While the sparks weren’t exactly flying and we don’t expect Tinder to offer to pay for their wedding just yet, it sounds like there might still be hope for these two.

What’s the best first date you’ve ever had? Tell us @BritandCo!

Alissa Schulman
Alissa is a Los Angeles-based entertainment journalist who finds no shame in her bad TV tastes. When she's not hiding behind her laptop, she's ordering too much food at restaurants or running around her neighborhood.
Pop Culture