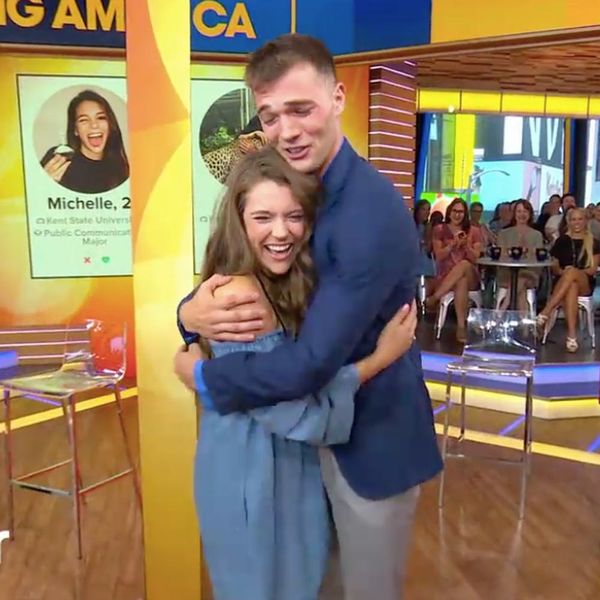 Tinder is all about making love matches, as shown by their enhanced features and Pride Month wedding giveaway. Recently, the company jumped in to help write one more success story with two longtime users, Josh Avsec and Michelle Arendas — who had been chatting on the app for three years but still hadn’t met in real life — by offering to set them up on their dream first date. Before they jet off to Hawaii on their Tinder-sponsored date, though, Good Morning America brought the two together for their first face-to-face meeting. (And, yes, they did look just like their pictures.)

GMA gave the pair a live, televised first meeting ahead of their trip, because who wouldn’t want to meet their Tinder date in front of an audience? They set up Avsec and Arendas on either side of a partition and asked each to answer a series of questions before the big reveal, a la The Dating Game.

As expected, the two were full of giggles when they finally saw each other in the flesh. “My butterflies have had butterflies. I have been imploding since I arrived in New York,” Avsec shared.

The Tinder interaction between the two Kent State seniors first went viral after Avsec tweeted two photos of their exchange, which had turned into more of an ongoing inside joke than the typical, “Do you like tacos?” line of questioning you’d expect from an online dating convo.

“Hahahaha one day I’m going to meet this girl and it’s going to be epic. Look at the dates of our tinder texts,” he captioned the screenshots, which started with a strong, “Hey Michelle,” from Avsec in September 2014 and quickly became a series of quippy responses with months in between communications. “Sorry my phone died!” Arendas replied two months later, followed by Avsec’s “Sorry was in the shower” in January 2015, with the quips continuing until Avsec’s last message this month.

Hahahaha one day I'm going to meet this girl and it's going to be epic. Look at the dates of our tinder texts. pic.twitter.com/DASQK4c5cX

Thanks to the internet’s quick fascination with the duo, Tinder saw Avsec and Arendas’ struggle and slid into their mentions to offer a free trip to a city of their choosing for their first date. But there was a catch: The slow-to-respond couple had only 24 hours to decide where they were meeting. This time, they responded quickly, telling Tinder that they had agreed on Maui.

While the two seem to have a lot in common, they did just meet, so we’ll just have to keep an eye on their social media for trip updates.

Do you have a Tinder success story? Tell us @BritandCo!

Alissa Schulman
Alissa is a Los Angeles-based entertainment journalist who finds no shame in her bad TV tastes. When she's not hiding behind her laptop, she's ordering too much food at restaurants or running around her neighborhood.
Pop Culture
More From Pop Culture