10 of the Wackiest Theme Parks From Across the Globe 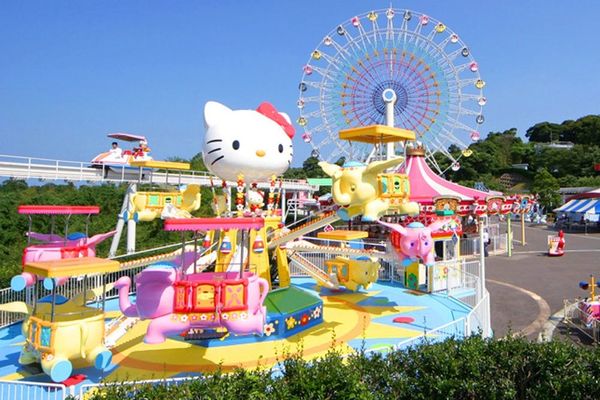 When you think “theme park” chances are Disneyland is the first to come to mind. The beloved characters, the timeless rides, the delicious food — it’s all great. But you know we’re a little more creative around here at Brit + Co, and like to give you guys some ideas for your summer travels that might inspire you beyond the five-day family trip. This year, skip the mouse and pay a visit to Santa in July, or explore a Colombian theme park located at the former home of an infamous drug lord. The possibilities are weird, but endless. Here are 10 wonderfully wacky amusement parks from across the globe that are sure to leave a lasting impression.

1. Dickens World: Literary buffs rejoice! This park located in Kent, UK takes you back to Charles Dickens’ Victorian England with attractions such as a Great Expectations Boat Ride, Haunted House of Ebenezer Scrooge and a Victorian school room. (via Dickens World, image via Day Visit)

2. Harmonyland: Pay a visit to this Japanese park dedicated to Hello Kitty and all her comrades. Take a tour of Kitty’s castle and watch a parade in which Kitty finds biblical Noah after the storm and welcomes him into Harmonyland. (via Harmonyland, image via Beppu Navi)

3. Santa Park: This is not your seasonal shopping mall North Pole setup. Located in chilly Finland — in a series of underground caves — you can attend elf school, visit a gingerbread kitchen and go on a sleigh ride. Don’t worry about having to wait until the holidays to head on over, the village is also open for the majority of the summer. (via Santa Park, image via Top Rated Travel)

4. Dollywood: If you’re headed down south this summer, it just wouldn’t be right to miss out on this Tennessee theme park owned by the Queen of country, Ms. Dolly Parton herself. (via Dollywood, image via Coaster Crazy)

5. BonBon Land: This bizarre and comical Denmark park is owned by a Danish confectionary crafter who makes candy featuring unusual objects and animals. There’s nothin’ sweet about these rides though — you’ll find a dog fart roller coaster and puking turtle swings at this park. (via BonBon Land image via Visit East Denmark)

6. Ocean Dome: Who says you need to head to the coast for a beach day? In Miyazaki, Japan, you will find an indoor beach with a 460 by 278 foot heated, fresh-water “ocean”� bedded by 600 tons of polished marble chips. Once you get sick of all that “sun” you can head over to the three-story promenade of shops for some retail therapy. (via Viral Nova, image via Flickr)

7. Diggerland: Believe it or not, this amusement park devoted to construction actually started in the UK and just opened their first US location in West Berlin, NJ. Get the fam together to cheer on the Dancing Diggers, a team of backhoe loaders that perform some very odd choreography. (Image via Facebook)

8. Ferrari World: Okay so maybe you can’t afford your own Ferrari and you’re too intimidated to take one out for a test drive. Should you ever find yourself in Abu Dhabi, we have the perfect solution. This indoor park offers 20 Ferrari-inspired rides and attractions and hosts a collection of more than 30 vintage and contemporary cars. (via Ferrari World)

9. Hacienda Napoles: Drug lord and theme park aren’t usually two phrases you associate with one another, but there is always an exception. This attraction is located in Doradal at the estate of the late Colombian drug lord, Pablo Escobar. Despite the former owner’s reputation, don’t expect any illegal mischief here. Instead you can check out the ruins of his home, see live animals or cool off at the water park. (via Hacienda Napoles)

10. Loveland: We’re just going to come right out with it: This is a theme park about sex. While there are no rides (although we can only imagine what those would be like), this park is definitely still worth a visit. On Jeju Island in South Korea, you’ll find over 140 saucy, often silly sculptures created by art school graduates. Naturally, the theme park is 18 and up. (via Jeju Loveland image via Late Rooms)

Which theme parks are you dying to visit? Share with us in the comments!

7 Steps to Totally Organize Your Fridge This Summer