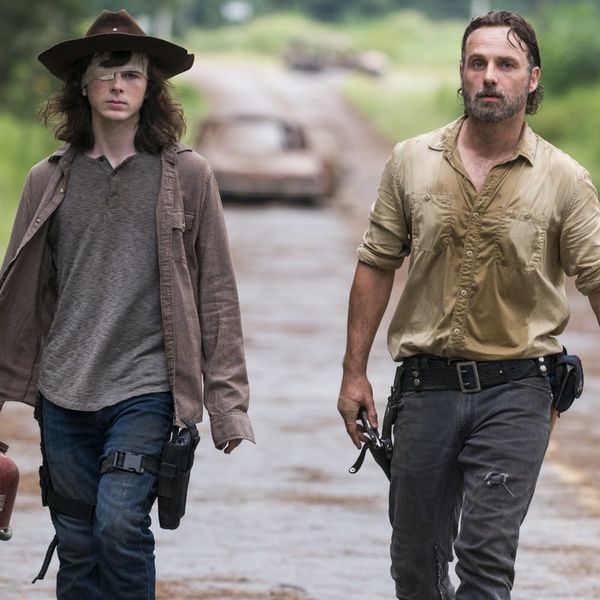 The Walking Dead has been known to be ruthless with offing some fan-favorite characters. (RIP, Glenn. Sniff.) As the show, now in its eighth season, heads into its midseason hiatus, it upheld the fall finale tradition of an intense cliffhanger ending. Spoilers ahead!

Well, they finally did the unthinkable: Carl Grimes got bit by a walker. At the end of the episode, he revealed to his father, Rick, the wound that was festering on his stomach. In the past, the show has been able to save people who have been bitten on limbs that could be amputated, but it would seem that Carl’s bite is untreatable.

“It will play out as bites play out on the show,” the show’s executive producer and showrunner Scott M. Gimple said on Talking Dead following the 90-minute episode. “Carl right now is alive and he has some business to attend to. That is a one-way ticket, but I’d like to think that the things that we see in the next episode are so important to his life and the other character’s lives.”

So, it seems confirmed that Carl won’t make it out of the season alive. Fans took to Twitter to express shock, sadness, and some good old-fashioned denial.

CARL IS IMMUNE. LET’S SAY IT TOGETHER. #TheWalkingDead pic.twitter.com/TGZvEwIhjJ

"You are gonna beat this world, I know you will. You are smart, and you are strong and you are SO brave and I love you" — Lori Grimes #TheWalkingDead pic.twitter.com/oN2UHZUT8z

The show’s official Twitter account even had to reassure fans that it wasn’t, in fact, a dream, while the actor who plays Carl, Chandler Riggs, thanked fans and said they’d be hearing from him soon. Sigh. RIP, Carl.

What did you think of TWD‘s fall finale? Tell us @BritandCo!