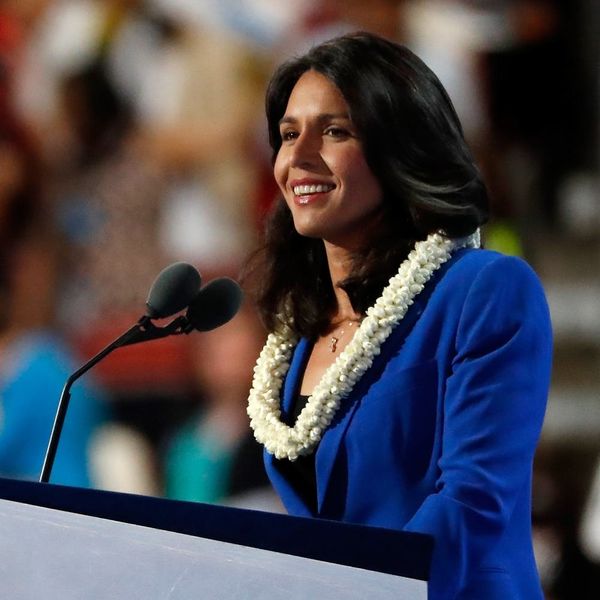 The next presidential election is next year, and Democrats are officially filling out their playing field with candidates seeking to take on Donald Trump. To date, four Democrats have formally announced 2020 presidential campaigns: former Housing and Urban Development secretary Julián Castro, US representative for Hawai’i Tulsi Gabbard, Maryland representative John Delaney, and West Virginia state senator Richard Ojeda. And, while she hasn’t officially declared her run, Massachusetts senator Elizabeth Warren released a lengthy video to announce her assembly of a presidential exploratory committee — a near guarantee that she’s throwing her hat into the ring.

These five candidates vying for their party’s nomination will doubtless be joined by many more of their Democratic peers before primary season rolls around next year, but give a good indication of the types of policies and rhetoric voters can expect in the coming months. Here’s what the first candidates stand for, and a little about what they’ve been up to recently:

When Elizabeth Warren announced her exploratory committee on December 31, the 69-year-old senator from Massachusetts became the highest-profile politico to (if unofficially) throw her hat into the ring for a 2020 presidential run. For her entire career, Warren has checked off important liberal litmus tests, such as being pro-choice, typically supportive of LGBTQ+ rights, and supportive of progressive criminal justice reforms. Like most Democrats, she stands opposed to President Trump’s plan to build a southern border wall.

But lately, Warren has largely made headlines for the ongoing battle between herself and President Trump over her racial identity. President Trump has made Warren a primary target of verbal attacks during his presidency, frequently referring to her as “Pocahontas,” in this case a racial slur referencing Warren’s claims to indigenous ancestry. Against the wishes of many Native American activists, Warren took a DNA test in 2018 to “prove” she had distant indigenous ancestry. Despite this public image misstep, many liberals have long hoped Warren would make a presidential run. (Photo by Scott Eisen/Getty Images)

Julián Castro, 44, made his 2020 candidacy official on January 12. He served as the mayor of San Antonio, Texas, from 2009 to 2014 before being drafted by President Obama to serve as secretary of Housing and Urban Development from 2014 to 2017. Castro, whose twin brother Joaquín is a US representative for Texas, takes the standard liberal position on most of the major issues. Castro has been consistently pro-choice for abortions after 20 weeks and is supportive of the Paris Climate Agreement and a pathway to citizenship for most undocumented immigrants living in the US.

Castro is in Puerto Rico on Monday to make the first official stop on his presidential campaign tour. Speaking at a summit hosted by the progressive PAC Latino Victory Fund, Castro condemned President Trump for reportedly threatening to use funds that were previously earmarked for disaster relief in Puerto Rico to build a southern border wall. (Photo by Edward A. Ornelas/Getty Images)

Tulsi Gabbard, the 37-year-old US representative from Hawai’i, beat Castro by one day with her January 11 campaign announcement. Among progressives, Gabbard is probably the most controversial Democrat contender to step forward so far. This is largely due to Gabbard’s history of anti-LGBTQ+ activism.

In the 1990s and 2000s, Gabbard worked for her father’s anti-gay organization, which successfully mobilized to pass a state amendment barring same-sex marriage in 2002. Though Gabbard has apologized for her previous anti-LGBTQ+ positions and backed a 2013 challenge to the Defense of Marriage Act, it seems unlikely that Democrats would back a candidate who has been on the record as calling gay marriage an “offensive” agenda pushed by “homosexual extremists.”

Gabbard has also taken heat for her support of Syrian dictator Bashar al-Assad and right-wing nationalists in India, and for refusing to condemn the CIA’s use of torture.

Despite her record, Gabbard received backing from various liberal and progressive individuals and groups, including Bernie Sanders and Planned Parenthood, when she ran for re-election in 2018. This could be due to the fact that Gabbard has also been consistently pro-choice during her tenure in office, and was a co-sponsor of the Dream Act in 2017. (Photo by Aaron P. Bernstein/Getty Images)

John Delaney might be less familiar to a national audience than Warren, Castro, and Gabbard, but he’s been an official 2020 presidential contender for much, much longer: The 55-year-old former US representative from Maryland announced his intention to run in an op-ed for The Washington Post way back in July 2017.

Delaney is perhaps best known for introducing legislation in 2014 to reform housing finance. In keeping with his party, Delaney is pro-choice and has supported LGBTQ+ issues such as gay marriage. Though he’s received a high rating from the National Association of Police Organizations, Delaney released a statement last week that applauds the pardoning of Cyntoia Brown and criminal justice reform. Delaney has defended immigration reform as a “moral and economic imperative.”

Delaney has promised to pass only “bipartisan” legislation for his first 100 days in Congress. This is a departure from Warren and Castro, in particular, who have firmly positioned themselves as opposition to Trump and the GOP. Delaney also stands apart from his colleagues in that he’s extremely wealthy, having been the CEO of a publicly-traded company before running for Congress in 2012. According to the Center for Responsive Politics, Delaney is the third wealthiest member of the House of Representatives, with an estimated net worth of more than $230 million. (Photo by Andrew Harnik for The Washington Post via Getty Images)

Richard Ojeda, 48, is a retired Army Major and recently-resigned West Virginia state senator who launched his presidential campaign in November, shortly after losing his bid to represent West Virginia in the US House. Like Delaney, Ojeda won’t be as familiar to the national audience, but he’s piqued curiosity over his progressive stance on labor rights and impassioned pleas to address the opioid epidemic, which has hit the state particularly hard. Most recently he became known for his vocal support of the West Virginia teachers’ strike that marked a wave of teachers’ strikes in other states as well. He otherwise holds mainstream Democrat positions in defense of marijuana legalization and Medicare for All.

However, Ojeda may have a lot of work cut out for him if he wants to win over a national, liberal voter base, given that he supported Trump in 2016.

UPDATE: A more current, up-to-date list of who’s running can be found here.