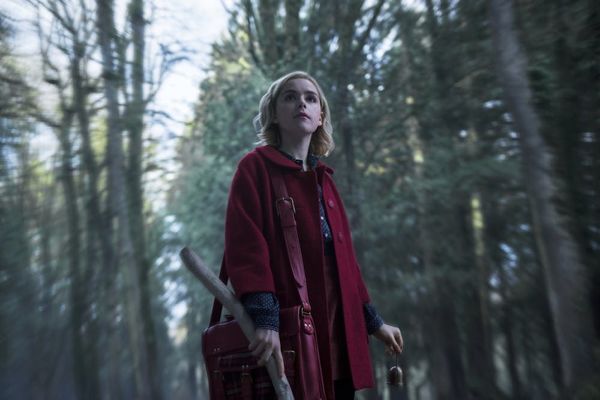 Welcome to Brit + Co’s Weekly Entertainment Planner! Each Monday, we highlight one thing we’re excited about in six categories — movies, TV, music, streaming services, podcasts, and a bonus pick from all of the above — to help you navigate your week in watching and listening. Check out our picks for the week of October 22 to 28 below. Your eyes and your ears will thank us!

Suspiria (October 26): Dakota Johnson, Chloë Grace Moretz, Tilda Swinton, Mia Goth, and more star in a super-creepy remake of the 1977 horror movie, which follows the students — and inherent darkness — of a world-renowned dance company. See it in theaters on Friday, October 26 — just make sure not to go alone! (Photo via Amazon Studios)

Chilling Adventures of Sabrina (October 26): Just in time for Halloween, Netflix releases its dark take on the iconic Archie Comics character. Mad Men‘s Kiernan Shipka leads the show as the titular teenage witch, who will grapple with evil while still dealing with life as a high school student. This isn’t the feel-good ABC sitcom of your youth — but we’re here for it. Chilling Adventures of Sabrina arrives on Netflix on October 26. (Photo via Diyah Pera/Netflix)

Someone Knows Something: Season 5 of the CBC true-crime podcast explores the mysterious disappearance and death of 15-year-old Kerrie Brown in 1985. Host David Ridgen embeds himself in the small community, forging important relationships and uncovering new information in compelling cases long forgotten but never solved. Listen online, or subscribe wherever you get your podcasts.

John Legend, A Legendary Christmas (October 26): The holidays are here early with the pre-Halloween release of John Legend’s Christmas album, featuring classics like “The Christmas Song (Chestnuts Roasting on an Open Fire)” and “Silver Bells,” as well as some new originals. He’ll also be taking the album on a 25-date tour, if you need an extra bit of festive spirit. A Legendary Christmas drops October 26. (Photo via Kevin Winter/Getty Images)

Kelsey Miller, I’ll Be There For You: The One About Friends (October 23): You’ve already re-watched Friends nine hundred times on Netflix, so the next logical step would be to read this deep dive on the ’90s sitcom phenomenon. Through commentary, interviews, and behind-the-scenes anecdotes, Kelsey Miller looks at the history of the show and the reasons for its success, ultimately making you want to rewatch it yet again. (Photo via Getty Images)