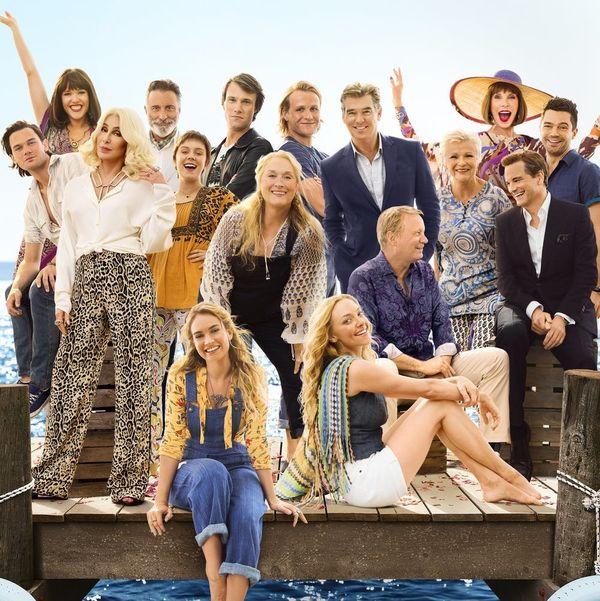 Welcome to Brit + Co’s Weekly Entertainment Planner! Each week, we highlight one thing we’re excited about in six categories — movies, TV, music, streaming services, podcasts, and a bonus pick from all of the above — to help you navigate your week in watching and listening. Check out our picks for the week of July 16 to 22 below. Your eyes and your ears will thank us!

Mamma Mia! Here We Go Again (July 20): It’s been 10 years since the original Mamma Mia! sang and danced its way into our hearts. In the long-awaited sequel, Sophie (Amanda Seyfried) is pregnant and running her mother’s Greek island. Early trailers had fans wondering about the whereabouts of Meryl Streep’s character in the present timeline, but we don’t doubt she’ll show up. Plus, Cher stars as Sophie’s grandmother, Ruby, which is wonderful all on its own. Mamma Mia! Here We Go Again opens in theaters in July 20. (Photo via Universal Pictures)

Trial & Error: Lady, Killer (July 19): Season 2 of NBC’s comedy anthology series takes the form of a true-crime mockumentary. Kristin Chenoweth stars as the “eccentric first lady of East Peck” who is accused of her husband’s mysterious murder. Her lawyer is Josh Segal (Nicholas D’Agosto), who defended John Lithgow’s eccentric character in season 1. Season 2 premieres with a double episode on Thursday, July 19, at 9pm ET on NBC. (Photo via NBCUniversal)

Amazing Interiors (July 13): Netflix is making a major move into unscripted programming, and Amazing Interiors marks its first foray into the home makeover game. The show will feature homes with relatively ordinary exteriors that conceal a wealth of weird and wonderful decor choices, from a backyard rollercoaster to an indoor aquarium.

Bubble: Maximum Fun’s latest podcast is a scripted, dystopian comedy starring Alison Becker (Parks and Recreation), Keith Powell (30 Rock), Cristela Alonzo (Cristela), Eliza Skinner (The Late Late Show), and Mike Mitchell (Love), about trying to get through life in an enclosed and monster-filled city. It’s narrated by Rookie‘s Tavi Gevinson, and you can listen on the website or wherever you get your podcasts.

Pitchfork Festival (July 20 – 22): P4K Fest always brings the best of today’s underground sounds, and this year, Lauryn Hill is closing the festival with a 20th anniversary performance of The Miseducation of Lauryn Hill. Pitchfork Festival takes place Friday, July 20, to Sunday, July 22, in Chicago’s Union Park, and you can get tickets right here. (Photo via Kevin Mazur/Getty Images For The Rock and Roll Hall Of Fame)

UnREAL (July 16): Just a few months after the end of season 3, Hulu surprise-dropped the fourth and final season of UnREAL, which centers around a fictional Bachelor-esque dating show and the producers who pull the strings behind the scenes. There are only eight episodes, so savor them. (Photo via Bettina Strauss/Hulu)