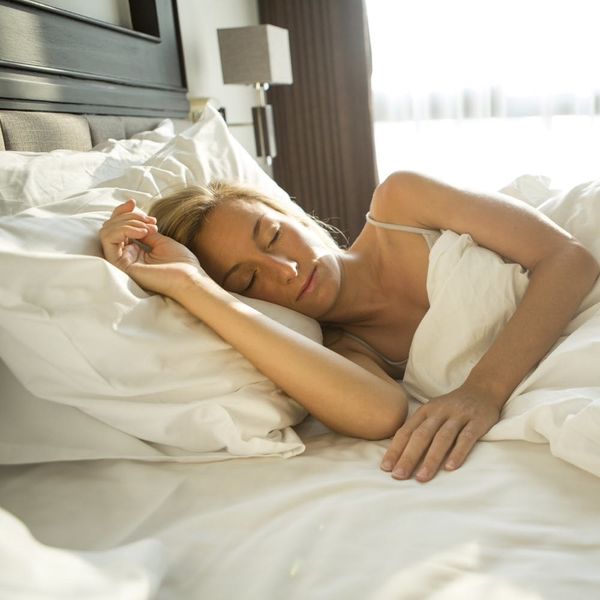 As the weather gets nicer, we’re starting to get serious about planning our sweet summer vacay — from looking up places to go on a healthy vacation to browsing through #lazygirl vacation hairstyles we can rock during our awesome trip. But no matter how much research and planning we do, there’s always one part of our summer getaway that we don’t quite look forward to — trying to fall asleep in our hotel room after a long and exhausting flight.

This phenomenon is usually called the “first night effect,” referring to that unrested and groggy feeling the morning after we sleep in an unfamiliar place for the first time — like a hotel room or a new apartment. Although we usually just blame that restlessness on all the excitement, a new study shows that it actually has deep roots in science and psychology.

According to the study published in the journal of Current Biology, “first night effect” has to do with our cranial instincts. Using advanced neuroimaging techniques, Masako Tamaki and co. quickly realized that when left to sleep in an unfamiliar place, the left side of our brains remain active during the first night while the right side sleeps normally. Researchers posit that the left hemisphere of our brain stays awake during the first night in a new locale to keep watch on the unfamiliar surroundings — sort of like a built-in safeguard in case anything were to go awry.

“We know that marine animals and some birds show unihemispheric sleep, one awake and the other asleep,” says Yuka Sasaki. Although humans don’t display this effect as prominently as these marine animals, “our brains may have a miniature system of what whales and dolphins have.”

But what does that mean for us? Well, when it comes time to plan your next summer vacay, we suggest booking one extra night. Not only will your brain acclimatize to your new surroundings after that first night, but you’ll be able to get a little more relaxation time in the long run too… in the name of science, of course.

Do you experience the “first night effect” in hotel rooms? Let us know by mentioning @BritandCo on Twitter.

Ashley Macey
Ashley Macey is a lifestyle freelance writer who loves all things fitness, wellness, and creativity. When she's not exploring her home in the Pacific Northwest with her dog Max, you'll probably find her curled up with a good book and some hot tea. Follow her daily jaunts on Twitter.
science
Health
science Sleep study
More From Health