What to Stream With Dad for Father’s Day 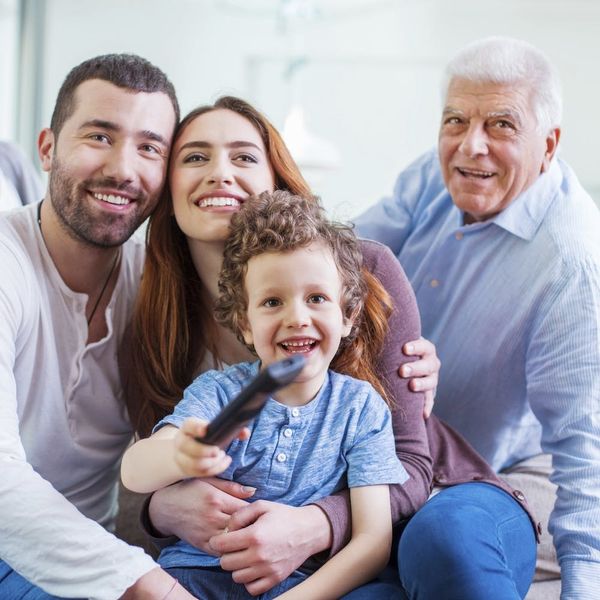 Mother’s Day is pretty easy as far as celebrations go: flowers, brunch, prezzies and catch up time. Things can be a little more difficult with dads and father figures. For those looking to make Father’s Day the BEST EVER, may we recommend some nice summer BBQ skewers, followed by a movie marathon on the couch/Dad’s fave chair? And because there are so many different types of dad in the world, we pulled together a list of all dad-approved movies and shows that should delight any and every type of father.

1. Making a Murderer: Sometimes dads are late to the party. If your doc-loving dad missed out on the Making a Murderer hype, fuel his new addiction by introducing him to it. Get ready for a long discussion about whether or not Steven Avery is guilty all the way through to Thanksgiving. (Photo via Netflix)

2. Cartel Land: If only this doc had been around when we were all growing up, dads could have just screened it in the living room instead of having “the talk” about why drugs are bad.

3. Virunga: If your pops can’t get enough of the family dog or always seems to want to go to the zoo, show him Virunga. The documentary about gorillas in the Congo will either inspire him to save the planet or prompt some dad jokes about monkeying around. Either way, he’ll like it.

THE DAD WITH THE REALLY LOUD LAUGH

4. The Big Lebowski: Go back to the classic comedy and embrace the weirdness. Before long, Pops will be drinking White Russians and saying things like “The Dad Abides.” (Photo via Universal Studios)

5. Anchorman: We’ve yet to meet a dad who does not love Anchorman. Indulge his sense of humor with a papa-approved cast (Will Ferrell, Paul Rudd and Steve Carell) and some of the most classic dad jokes of all time.

6. Caddyshack: Another classic that consistently earns the dad seal of approval, this 1980 comedy should bring dads right back to their golden years. It stars LOL legends Chevy Chase, Bill Murray and Rodney Dangerfield, AKA all the guys that (probably) shaped your dad’s (sometimes questionable) sense of humor.

THE DAD WHO LOVES A GOOD UNDERDOG STORY

7. Friday Night Lights: For the dad that dutifully went to high school football games and cheered from the stands, help him relive the experience with Friday Night Lights. The show has drama aplenty to keep you hooked and lots of plays and football action for him. (Photo via NBC)

8. Rocky: We can only imagine that the feeling of accomplishment a parent gets when you bring home that A+ paper is on par with running up the steps of the Philadelphia Art Museum to “Eye of the Tiger.” To celebrate the lifelong sport that is parenting, sit down for a Rocky marathon. And thank your dad for always being in your corner.

9. The Waterboy: If Dad likes sports and slapstick, he’s def already seen The Waterboy, and it’s prob his favorite flick. Humor him and watch Adam Sandler take over the football field. YOU CAN DO IT!

THE DAD WHO’S A PART-TIME DETECTIVE

10. True Detective: Few crime TV shows have been as masterfully done as this HBO masterpiece. If your dad’s of the brooding variety, he should love the addictive noir series. (Photo via HBO)

11. Goldfinger: It’s a proven fact that dads love Sean Connery. If your dad aspires to be an international man of mystery, solving crimes and taking down villains wherever he goes, kick it old school with a James Bond marathon — nearly every single 007 movie ever made is ready for streaming.

12. Chinatown: For the sophisticated crime-solving dad who loves intrigue and psychological thrillers, you can’t do any better than a screening of Chinatown. The beautifully-shot movie stars Jack Nicholson and Faye Dunaway and will have both you and Pop instantly hooked.

13. Daredevil: Maybe Dad’s a complicated guy. Maybe the years have hardened him into a tough hero. For the dad that likes superheroes who wrestle both villains and their own demons, get him to start a Daredevil binge. (Photo via Netflix)

14. The Dark Knight: The Christian Bale Batman trilogy is a superhero series that most everyone enjoys — even people who really don’t like superheroes. So, if your dad digs men in capes fighting baddies, but you truly could not care less, turn this one on. It is Father’s Day, after all.

15. Iron Man: Chances are Dad is the iron man in your life, always coming to the rescue when you need him the most, so settle in with the big-screen, billionaire-inventor version of your resourceful dad. (Flashback to a phone call of asking your dad how to fish out the mascara wand that fell down your drain or how, exactly, to change a tire.)

THE DAD WHO LIKES TO GEEK OUT

16. Planet Earth: Get lost in a marathon of Planet Earth, ideal for the hippie dad. Pro Tip: Dads tend to love the deep sea, mountains and ice world episodes. (Photo via Discovery)

17. Anthony Bourdain: Parts Unknown: Perfect for the dad who loves to travel and learn all about the world while having a little fun. Bourdain’s fascinating and fun mini-documentaries will take Dad wherever he wants to go, without ever having to leave the couch.

18. Brain Games: If your dad is the type to scream at the TV while watching Jeopardy, introduce him to his new favorite show. Brain Games will mess with everybody’s mind while teaching weird brain hacks.

19. Cosmos: A Spacetime Odyssey: Is your dad a Neil deGrasse Tyson fan? Sit down and share the wonders of the universe with him.

THE DAD WHO ROCKS

20. Keith Richards: Under the Influence: Papa was a Rolling Stones fan. If he still can’t get enough of the British rockers, sit down with him and follow the life of the guitar legend from childhood into aging (but still awesome) rocker. (Photo via Netflix)

21. I’m Not There: Bob Dylan is the savior of every slightly-hip dad that grew up in the ‘60s or ‘70s. If your dad has yet to see the epic flick that stars Cate Blanchett, Heath Ledger and Christian Bale all playing Dylan at different stages in his life, make him watch the intriguing and imaginative film that pays homage to music’s greatest lyricist.

22. Jimi Hendrix: The Uncut Story: If your dad is constantly drumming on the steering wheel while driving or pretending to play air guitar with every song on the radio, sit him down for a screening of the epic Jimi Hendrix multi-part documentary on Hulu. The doc features previously unseen footage and interviews, and is endorsed by Hendrix’s family, so all rocker pops will eat it up.

23. Big Fish: Chances are you’ve told your dad a white lie or two… or a dozen. You can both take comfort in the fact that none of your lies were the size of the tall tales in this flick. (Photo via Columbia Pictures)

24. About Time: Who ever said that dads can’t get emotional? For that Father’s Day when you need to tell Dad just how much he means to you, turn on this movie and prepare to see tears well up in your father’s eyes.

25. Arrested Development: Family classics don’t all need to be sappy. If your father frustrates you beyond belief, but you love him and laugh with him anyways, binge through all the seasons of Arrested Development and file away all the clever lines. Pretty soon you and your dad will be texting “THERE’S ALWAYS MONEY IN THE BANANA STAND” and LOLing.

THE DAD WHO’S A CLASSIC

26. The Godfather: Make Dad an offer he can’t refuse: an afternoon marathon of The Godfather Epic. It’s the ultimate in father knows best + affirmation that family always comes first. (Photo via HBO)

27. The Good, the Bad and the Ugly: Is there any dad on this planet who hasn’t (at least once) imagined himself as Clint Eastwood? If your dad’s a superfan, you can agree to go on a spaghetti Western marathon.

28. Pulp Fiction: If you were to take a poll of all American dads, we bet that the majority could recite Samuel L. Jackson’s famous speech from Pulp Fiction. If yours is also a fan, let him quote the movie the whole way through. If not, sit him down and let him learn all about a “royale with cheese.”

What are you watching with Dad this weekend? Let us know @BritandCo!