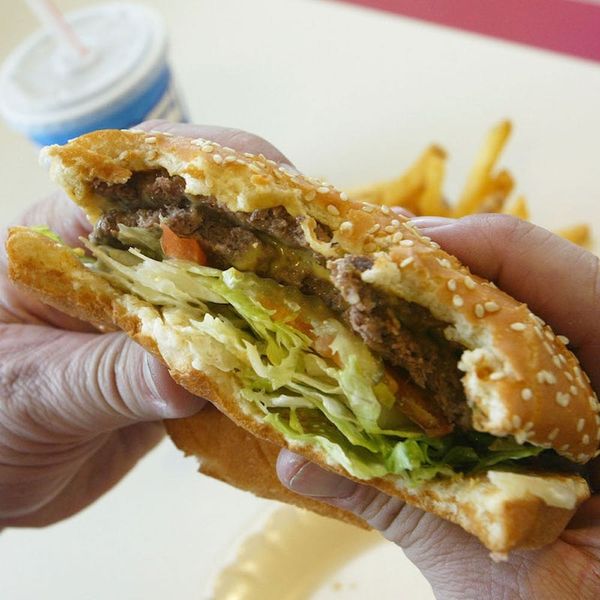 Vegetarian and vegan food and recipe options are more available than ever now, making it relatively easy to switch to a plant-based diet. People choose to go veg for a variety of reasons, and a popular new documentary recently added to Netflix explores some of the more extreme health-based motives. But while the doc has made some viewers reconsider eating animal products, many other people are skeptical about its bold claims. So what’s the deal with What the Health?

What the Health was made by the team behind Cowspiracy, a documentary that looked at the environmental effects of the livestock industry. Very early on in What the Health, after researching connections between diet and disease, writer and director Kip Andersen wonders whether the processed meats he grew up eating were as harmful as a lifetime of smoking would have been. Cancer, cholesterol, heart disease, obesity, diabetes — throughout the film, Andersen and many other plant-based diet advocates attempt to explore how non-vegan diets might be connected to some of our worst health problems.

It’s certainly true that many of us could use more fruits, grains, and vegetables in our diets, and that we could be more mindful of consuming processed goods and animal products like red meat, dairy, and eggs in moderation. But as Vox points out in its thorough explainer, the links Andersen makes between certain diets and diseases are often reported out of context, and the results of studies he cites are sometimes presented in ways that could be confusing to viewers. (Furthermore, correlations are one thing, but it’s difficult to determine a direct cause-and-effect relationship between foods and specific diseases.)

To cite an example from Vox, Andersen says eating processed meats every day increases your colorectal cancer risk by 18 percent. According to WHO, it is associated with an increased risk, but the 18 percent stat is relative to a person’s lifetime risk, which is around five percent, according to the American Cancer Society.

“A person’s lifetime risk of colorectal cancer is about five percent, and eating processed meat every day appears to boost a person’s absolute risk of cancer by one percentage point, to six percent,” Vox‘s senior health correspondent Julia Belluz writes. “So enjoying the odd strip of bacon or salami sandwich isn’t going to change your lifetime cancer risk, but eating the stuff every single day could increase your risk of this one particular cancer by a single percentage point.”

Wouldn't you like to see these labels on processed meat? The Center for Science in the Public Interest is trying to make it a reality. #wthfilm

Throughout the documentary, Andersen also questions the practices of many leading health organizations. One interview with the Chief Scientific and Medical Officer of the American Diabetes Association gets particularly heated when the ADA rep declines to get into specifics about dietary causes of diabetes, because of the aforementioned difficulty proving food-related cause and effect. Nearly all of the health professionals consulted in the documentary otherwise are vegans themselves; some are also authors of books or their own diet programs based around veganism or vegetarianism.

Documentaries like What the Health definitely provide interesting, ahem, food for thought, especially in relation to some of the inner workings of the food and health industries. But it’s important to remember balance — not only in your own dietary needs, but in the reporting that goes into a feature like What the Health. While the source information isn’t false, it is skewed by a pro-vegan perspective, and at times it’s presented in a misleading manner.

Individual health history or goals, beliefs, income, location, and so many other factors go into the food decisions we all make, and despite some of the alarming information presented in What’s the Health, it’s important to remember that there’s no one-diet-fits-all cure to major health problems.

Has a documentary ever made you change your diet? Let us know @BritandCo.