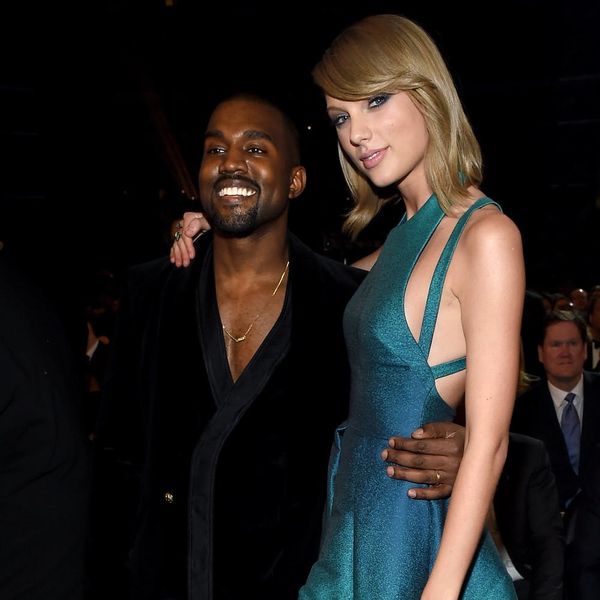 Taylor Swift’s new single, “Look What You Made Me Do,” off her upcoming album Reputation, has inspired a LOT of passionate responses. Fans immediately picked up on lyrics like the already-iconic “I’m sorry the old Taylor can’t come to the phone right now. Why? Oh, ’cause she’s dead!” And they have some thoughts on who, exactly, Swift is going after on the vengeful track.

The “old Taylor is dead” line plays as a phone recording by Swift herself. Is it a thinly veiled reference to the now-famous, Snapchat-leaked phone call between Swift and Kanye West regarding his “Famous” lyrics about her? Fans are screaming about the possible connection — and it’s not the only West reference Swift makes in the song.

“I don’t like your little games, don’t like your tilted stage,” Swift sings to open the song, taking what many believe to be a dig at West’s floating, tilting stage from his Saint Pablo tour. Of course, she doesn’t name him, but one of West’s most dedicated fan communities, @TeamKanyeDaily, has been flooding timelines with retweets of pictures and videos from the tour since Swift’s single was released.

Some fans think there are also some possible references to her long-running feud with Katy Perry in the song. Many suspect that the “Locked me out and threw a feast (what?)” lyric is a reference to Perry’s “Bon Appétit” single. But a few have zeroed in on a much more subtle potential Perry reference.

The singers’ feud started when Swift suggested in a 2014 Rolling Stone interview that an unnamed singer (widely believed to be Perry) tried to sabotage her tour by stealing her backup dancers. Perry, seemingly in response, tweeted, “Watch out for the Regina George in sheep’s clothing.” (Regina George, of course, is Rachel McAdams’ villain from Mean Girls.)

Some fans think Swift is referencing the burn book from Mean Girls when she sings, “I’ve got a list of names and yours is in red, underlined.” They’ve also noticed that the beat in Swift’s new song sounds a LOT like “Operate” by Peaches — which plays in Mean Girls as Cady (Lindsay Lohan) sees Regina kissing her crush at the Halloween party.

Taylor was once called "Regina George in sheep's clothing" and her new song uses the beat from this scene in Mean Girls. 👀 pic.twitter.com/lpRCCIIk1w

Shortly after the single was released, Swift also dropped a teaser for the official video, directed by Joseph Kahn and set to premiere at the MTV VMAs on Sunday, August 27.

In one frame of the teaser, Swift is seen holding and biting down on what looks to be a diamond choker. Her hands are covered in bling too — diamond snake rings, to be exact. Snakes have played a big part in Swift’s single launch, and in the past year as the defining emoji in her feud with Kim Kardashian. But is the choker a more subtle nod to Kardashian’s much-worn million-dollar push present — a diamond choker — from husband Kanye West?

Of course, any and all assumptions are pure speculation — but we’d be lying if we said that wasn’t half the fun.

Who do you think Taylor Swift is singing about in her new single? Let us know @BritandCo!