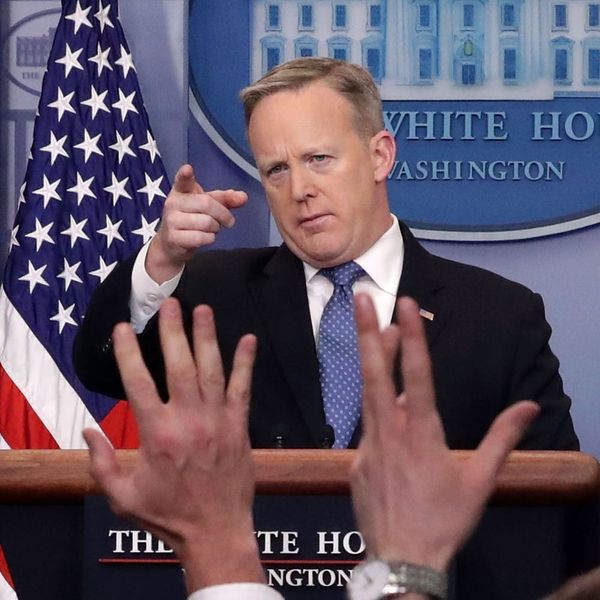 The relationship between President Trump (who is taking heat from Caitlyn Jenner, among others, after recent changes to transgender bathroom policies) and the media since he took office has been a strained one, to say the least.

Taking issue with everything from how his inauguration crowd size was (accurately) reported on to his recent comments on immigration issues in Sweden, one needn’t look further than Trump’s own personal Twitter account to see evidence of discord.

Give the public a break – The FAKE NEWS media is trying to say that large scale immigration in Sweden is working out just beautifully. NOT!

Don't believe the main stream (fake news) media.The White House is running VERY WELL. I inherited a MESS and am in the process of fixing it.

Things have gotten so bad as of late that he even referred to the group at large as the “enemy of the American People,” with journalists firing back using a brand new Twitter hashtag: #NotTheEnemy.

The FAKE NEWS media (failing @nytimes, @NBCNews, @ABC, @CBS, @CNN) is not my enemy, it is the enemy of the American People!

Today, things took a turn for the worse when Sean Spicer bucked his traditional Q&A session with the media in favor of an off-camera “gaggle” inside his office, which outlets Trump has openly criticized, including The New York Times, The Hill, Politico, BuzzFeed, the Daily Mail, New York Daily News, and others, were not allowed to attend.

Right-wing outlets including the Washington Times and One America News Network were allowed in the room, while other invited pubs such as The Associated Press and Time, reportedly refused to attend. Reporters who expressed anger with the new practice were asked to leave.

According to White House spokeswoman Stephanie Grisham (who responded to criticisms in an email), “The pool was there, so various media mediums were represented,” while an administrative spokeswoman, Sarah Sanders, promised an update later in the day. “The pool” refers to what usually includes a single rep from at least one TV network and one print outlet, but as CNN points out, the fact that four of the five major networks (NBC, ABC, CBS, and Fox News, some of whom have also been singled out by Trump in the past) were all invited while CNN was left out points to something that goes beyond tradition.

Sean Spicer also weighed in on the change, telling CNN that “We had it as pool, and then we expanded it, and we added some folks to cover it. It was my decision to expand the pool.”

That answer did not seem to sit well, however, with the White House Correspondents’ Association. “The WHCA is protesting strongly against how today’s gaggle is being handled by the White House,” said the org’s Association President Jeff Mason. “We encourage the organizations that were allowed in to share the materials with others in the press corps who were not. The board will be further discussing this with the White House staff.”

Yikes! Sounds like this is one battle that’s far from over.

Are you shocked by this latest development between Trump and the media? Sound off over @BritandCo.
(h/t The Hill, photos via Chip Somodevilla and Drew Angerer/Getty)