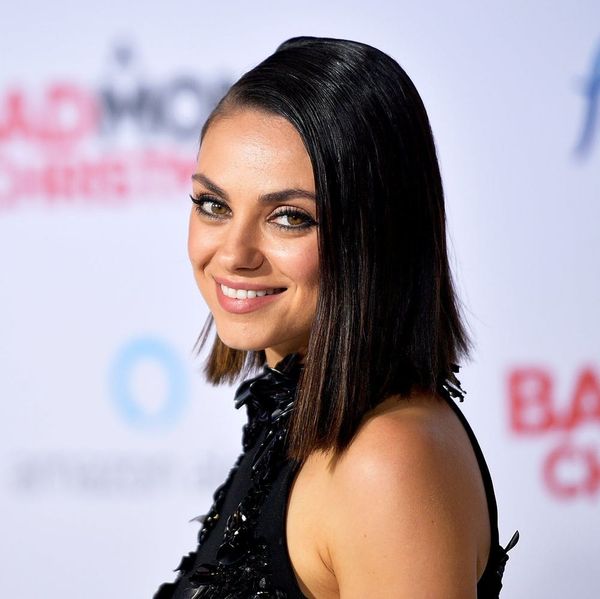 Mila Kunis certainly stands her ground where it comes to parenting decisions, like withholding Christmas gifts from her children so that they don’t become spoiled (“there are enough a**holes in the world,” she explained). But the mama of two isn’t so sure how she’s going to handle the moment her son and daughter finally find out about her movies.

When the popular celeb sat down for a chat on Jimmy Kimmel Live! on Monday to promote her hilarious new holiday movie, A Bad Moms Christmas, stand-in host Shaquille O’Neal couldn’t help but bring up the fact that the actress happens to give Santa a lap dance during the film. Considering this is just one of the NSFW scenes that the 34-year-old has starred in (yep, we’re thinking back to Black Swan as another prime example of eyebrow-raising story lines), when it comes to what age her kids will have to be before they see her onscreen, all Kunis could say at first was, “Ooh, I don’t know!”

She then added, “It’s weird, because there are billboards everywhere in LA right now [for A Bad Moms Christmas], and in the billboard, I’m wearing a Santa hat. And my daughter has no clue what I do for a living. She kind of thinks that mommy gets hair and makeup done for a living — that’s what I do. Because she comes to the hair and makeup trailer, and then she leaves. She saw this billboard of me with the Santa hat and she says, ‘Huh! That’s silly. Why is mommy wearing a Santa hat?’ I was like, ‘I don’t know.’”

That’s right, three-year-old Wyatt’s mama isn’t even willing to attempt to get into the subject with her daughter, saying, “I don’t know how to even explain to her what I do for a living, so I don’t know when she’s going to see any of my movies…”

And it’s not just because the little girl might not be able to grasp the concept of acting ATM, but also because of the kind of projects that Kunis takes on. “None of them are okay,” the Friends With Benefits star confessed. “None of them! I clearly don’t make movies for children, you guys.”

@SHAQ fills in for Jimmy tonight with guest #MilaKunis! #Kimmel

The mom to Wyatt and 11-month-old Dimitri doesn’t seem to be any more on top of things when it comes to Halloween. She revealed, “I was trying to convince my daughter, ‘Don’t you want to be Batman or Superman or something awesome?’ She’s like, ‘No, mom! I’m going to be Cinderella!’ I was like, ‘Eww! Gross! Okay!’ So, my kid is in a Cinderella dress — beautiful, cute little thing. ‘Mommy’s going to be…’ And I started naming off everything, like Han Solo. She’s like, ‘No, Mama is Elsa [from Disney’s Frozen].’ I was like, ‘No, kiddo. Mama’s not Elsa.’ This was six months ago.”

So, what was Mila Kunis when it came time to dress up for her neighborhood’s Halloween party? “Mama was Elsa.” Of course she was. “I sucked it up, you guys. I had a blond wig on and everything.” And we bet Wyatt loved it!

How would you deal with your kids seeing your movies if you were in Mila Kunis’ place? Let us know @BritandCo!

Desiree O
Desirée O is a ‘Professional Bohemian’ who loves anything and everything related to the arts, entertainment, and pop culture. She ADORES being a ‘Newsy’ for Brit + Co, covering all of the latest tidbits of awesomeness that you want to read about. When she’s not writing, she’s either making messy art, going on long adventurous walks with her camera, or poking around over at bohemianizm (http://www.bohemianizm.com/). You can find out about Desirée O and her work at http://DesireeO.com/ or follow her on Twitter @DesireeO.
Celebrity
Celebrity News
Celebrity Movies
More From Celebrity News